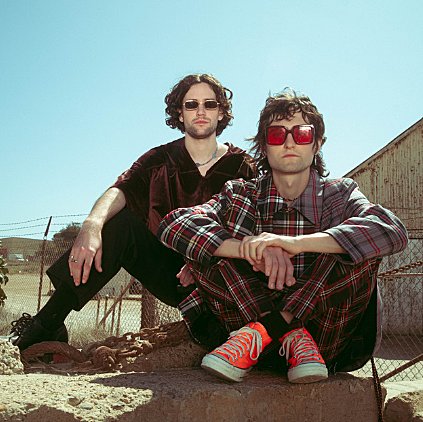 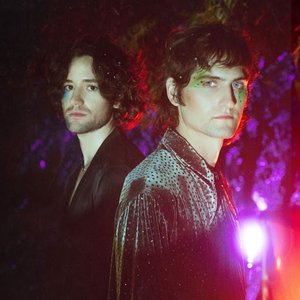 Sports first introduced themselves with their 2015 debut single “You Are The Right One,” a concentrated slow drip of funk. Their debut project, Naked All The Time (2015) and its follow-up, People Can’t Stop Chillin (2016) delivered additional critically-praised singles including: “Panama,” “Whatever You Want,” and “Someone You’d Rather Be Dating.” The band returned in 2018 with their first full-length album, Everyone’s Invited, a vibrant offering that received acclaim from Pitchfork, Pigeons & Planes, and Ones To Watch, in addition to earning plays on KCRW’s Morning Becomes Eclectic and Spotify’s New Indie Mix playlist.

To date, Sports has garnered over 100 million streams, an impressive feat for a band who’s stayed true to their independent roots and DIY ethos. After spending the last three years split between Los Angeles, California and Norman, Oklahoma, Cale and Christian find themselves back in their hometown, but with fresh perspective gained from distance and time.

There are also other bands named Sports.

1- Toronto (2004-present):
Members of The Meligrove Band, Polmo Polpo, The Carnations, By Divine Right and The Diableros. Headlined shows at 2008 and 2009 Halifax Pop Explosion festivals, and have played shows with Crystal Antlers, Julie Doiron, Yukon Blonde and Two Hours Traffic.
"A bizarre mix of pop and rock styles… brimming with ideas" -Exclaim!
"Wicked fun pop that is about as confounding as, well, they're mashing it all up" -Yvynyl
http://sports.bandcamp.com
http://facebook.com/sportstheband
http://myspace.com/sportstheband
http://twitter.com/s_ports
http://en.wikipedia.org/wiki/Sports:_The_Band

2 - Japanese:
Sports was formed by vocalist/guitarist Itou Hiroyuki in 2001. Their popularity began to rise in 2004 when they released their first major label single, Sports Wear, on Victor Entertainment, as well as headlining a Fuji TV Factory special and making an appearance at Summer Sonic. However, their second bassist retired in mid 2005, forcing them to rotate guest bassists for the next two years.
After two full albums, three mini albums, three singles, and a best of compilation, the band decided to go on an indefinite hiatus, playing their last live at Shibuya Eggman in September 2007.

3 - Seattle (2008-present):
SPORTS started in 2008 as two fellows making electronic songs. In 2009 SPORTS started recording their music and adding vocals, guitars, and other live instruments. In 2010 SPORTS played a lot of shows in Seattle and added a third member. 2011 will see the release of their debut album, more shows, some remixes, and a tour. Their sound is a blending of different genres and eras of music.
twitter: @sportsseattle
facebook: http://facebook.com/sportsband
bandcamp: http://sportsband.bandcamp.com

4 - Little Rock (2005-?):
The drone/noise trio, referred to as SPORTS formed in 2005 and released several short-run albums and splits via various American tape and CD-R labels. All releases are out of print. The band recorded a full-length album in 2007 which was never officially released and the status of the band is currently unknown.
More information can be found at www.myspace.com/sportsprimal

5 - Vancouver, CAN (2007- Present):
Sports is a rock band based out of Vancouver. They share members with Ladyhawk. They have an LP out on Triple Crown Records.
http://www.myspace.com/sportspoo

6 - Purchase, NY:
Sports was formed in October of 2009 by Dave Benton, Alkis Meimaris (both of Ridgewood, NJ post-punk band Little City Fires), Kyle Seely (Philosoraptor), and Jake Sachs-Michalanie (of Utica, NY hisound and tofu deluxe). All they're trying to do is be a bunch of serious guys and have a regular time.
http://myspace.com/letsgosports

7 - American:
In September 2007, NY based DJ/production team SPORTS (comprised of Nick Hook, Daryl Palumbo & Glue) released their debut mix CD entitled, "I'm Hungry." This eclectic mix is a 70- minute selection of breakbeats, freestyle, electro, ghettotech and funky house/disco. "I'm Hungry" will be a hand numbered, limited edition pressing of 1,000 copies with full color art!
After many talks about working on some music together, the stars aligned and we were all home at the exact same time. We spent some time in the lab and hammered out a mix full of music we love, cut up/remixed/re edited for your listening and dancing pleasure. We also hope to come play music in your town on a bunch of turntables, keyboards, vocoders, and whatever else will fit in our carry on bags.

8 - A powerviolence band from Kansas City.

9 - English:
Sports first arose from nowhere with the release of the "Shirk" EP in 2005. Featuring the tracks Magic Tricks, Steven Grout, Caroline, Mardi Gra, and 1982, the SHIRK EP was written and produced in Darlington, UK by Wayne Coulson, somewhat of a mythical figure in the North-East. When the band did arise from the shadows to play in smaller venues they were sold out. But the band went on hiatus just when the big waves were beginning. Word has it they will return with new material late 2007 and will be releasing an EP in early 2008 as well as singles on a number of independent labels.

10 - Maine, USA
Vocal, synth and drum machine sounds from Maine’s Clare Hubbard, who also records as Caethua, and is a member of Ancestral Diet and (D)(B)(H).