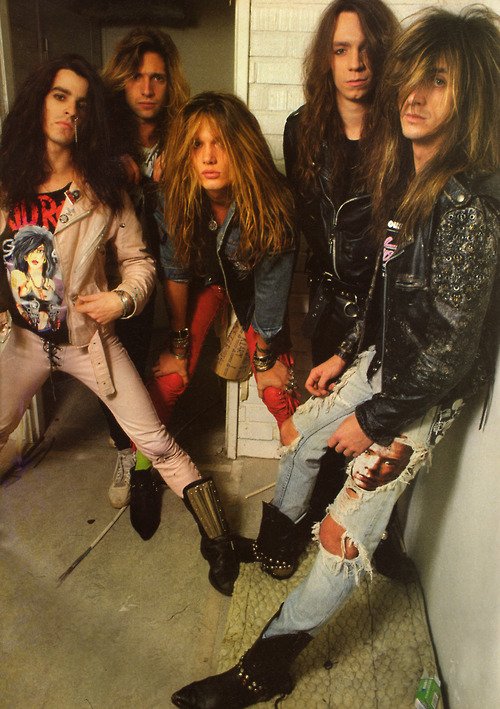 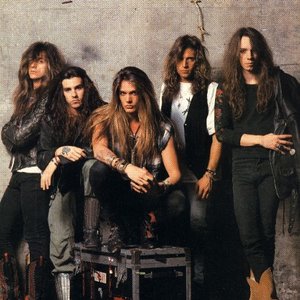 More than one artist using the Skid Row moniker:

2) Skid Row were an Irish blues rock band of the 60s/70s, based in Dublin and was the first band in which future Thin Lizzy members Phil Lynott and Gary Moore played professionally.

–==–
1) - Skid Row is an American heavy metal/glam metal band, formed in 1986 in Toms River, New Jersey. The group was commercially successful in the late 1980s and early 1990s, with its first two albums Skid Row and Slave to the Grind certified multi-platinum, the latter of which reached number one on the Billboard 200. The band's third album Subhuman Race was also critically acclaimed, but failed to repeat the success of its predecessors. During this period, the band consisted of bassist Rachel Bolan, guitarists Dave Sabo and Scotti Hill, drummer Rob Affuso, and frontman Sebastian Bach. The band sold 20 million albums worldwide by the end of 1996.

After replacing Bach with Johnny Solinger and Affuso with Phil Varone in 1999, Skid Row released Thickskin and Revolutions per Minute, which garnered mixed to negative reception. In 2015, Skid Row announced the band and Solinger have parted ways. The same day, Bolan and Sabo stated that Tony Harnell, formerly of TNT, was their new vocalist. Eight months later, however, Harnell left the band. In 2017, ZP Theart was named the official lead singer after spending a year as a touring member of the group.

Sabo and John Bongiovi were teenage friends and Sabo was briefly a member of Bon Jovi before being replaced by guitarist Richie Sambora. Sabo and Bongiovi agreed that if one of them made it in the music business, he would help the other out. Bon Jovi's manager Doc McGhee sought out Skid Row, and secured the band a record deal with Atlantic Records in 1988. Skid Row recorded its debut at the Royal Recorders in Lake Geneva, Wisconsin with producer Michael Wagener. Before releasing the album, the management have paid a reported $35,000 to guitarist Gary Moore for the rights to the name of his namesake band.

Skid Row (1989–1990)
Skid Row, released in January 1989, was an instant success. The record went 5× platinum on the strength of the Top 10 singles "18 and Life" and "I Remember You". Skid Row was an opening act on Bon Jovi's 1988–1989 The Jersey Syndicate tour, who was promoting its New Jersey album. As part of the six-month tour, Skid Row played its first ever UK gig supporting Bon Jovi's outdoor show at Milton Keynes Bowl on August 19, 1989. The next day, Skid Row played a successful club show at London's Marquee Club in Charing Cross Road. Skid Row also took part in the Moscow Music Peace Festival, which was set up to keep McGhee out of jail. McGhee was facing drug trafficking charges, and therefore set up an anti-drug/peace concert in Russia, featuring a few of the artists that he and his brother managed.

Skid Row returned to the UK three months later opening on Mötley Crüe's European Dr. Feelgood Tour in early November 1989 with White Lion. That was followed by a UK headlining tour culminating in a show at London's Hammersmith Odeon, with Vain supporting. In what is referred to as "The Bottle Incident" by fans of the band, Bach was hit onstage with a bottle thrown from the crowd at a concert in Springfield, Massachusetts, where Skid Row was opening for Aerosmith on December 27, 1989. Bach threw the bottle back, hitting a girl (not the thrower), so he jumped on the crowd to beat the person who can be seen on a tour video released by Skid Row called Oh Say Can You Scream in 1990.

Shortly thereafter, at another show, Bach put on a T-shirt proclaiming the anti-gay slogan "AIDS Kills Fags Dead". The shirt was given to him by a fan, but Bach eventually expressed regret over the incident, claiming that he did not read the slogan before putting the shirt on. The band also recorded a cover of the Sex Pistols "Holidays in the Sun" for the Make A Difference Foundation release Stairway to Heaven/Highway to Hell.

Slave to the Grind (1991–1992)
Skid Row returned to the studio with Wagener in 1990, to record its second studio album. Slave to the Grind was released in June 1991 and debuted at number one on the Billboard 200. The album reached 2× platinum status without any radio hits. Skid Row once again went out on a worldwide tour which lasted over a year, including a leg supporting Guns N' Roses in 1991 and an appearance at the Castle Donington festival in 1992.

Slave to the Grind was a departure for the band; where Skid Row was an album that followed the typical 80's band formula, Slave to the Grind had a heavier sound, even verging on speed metal with the title track. Skid Row took out Pantera as an opening act on much of the tour supporting Slave to the Grind. Skid Row originally asked upcoming grunge band Nirvana to open for them but they declined, saying that Skid Row was "too homophobic", relating to the Sebastian Bach T-shirt incident. Coincidentally, Nirvana's original band name was also Skid Row.

Subhuman Race and split with Bach (1992–1998)
After the Slave to the Grind promotional tour, an EP of covers B-Side Ourselves was released in September 1992. Before a third album could be recorded, Skid Row took an extended hiatus in 1993 on McGhee's recommendation to wait for the grunge movement to fade away. For some time, Skid Row parted ways with Wagener, possibly due to the music taking a different direction for the follow-up to Slave to the Grind. In 1994, the band returned to the studio with producer Bob Rock to record its third album. Subhuman Race was released in March 1995, and charted in the top 40 on the American charts. Although it did not achieve the success of its predecessors, it charted one single in the US and received positive reviews.

At that point, the band shifted to performing at smaller venues and its videos were rarely played on MTV, partly because of the rise in popularity of grunge and subsequent decline of many 1980s heavy metal styles. Skid Row was the opening act for Van Halen on its North American leg of the tour. Eventually, Bach was fired by the band in late 1996 after an argument with Bolan who turned down an opening slot on the Kiss reunion tour even though Bach already booked it. Other band members told Bach that Skid Row was too big for an opening act and that they were not going to do the show. Bach then left a message on a bandmate's answering machine telling them the band was never too big to open for Kiss.

Bolan had a side project, a punk rock band Prunella Scales who was playing at the same time as the planned Kiss show. The rift between Bach and the other band members subsequently led to him leaving Skid Row. Four years later, Skid Row was one of the opening acts for the 2000 Kiss Farewell Tour. In 1998 Skid Row released the compilation 40 Seasons: The Best of Skid Row. After Bach's departure, the remaining members continued as Ozone Monday with singer Shawn McCabe of Mars Needs Women. In 1998 and 1999, the group opened up for Kiss and Mötley Crüe under the new moniker.

New lineup and Thickskin (1999–2005)
Skid Row re-formed in 1999 with new lead vocalist Johnny Solinger and drummer Charlie Mills, later replaced by Phil Varone. After re-forming, the band opened for Kiss on its farewell tour, and also played with other 1980s metal bands such as Poison and Mötley Crüe's singer Vince Neil. In 2002 they were part of the Rock Never Stops Tour. Skid Row released its fourth full-length studio album Thickskin in 2003, which was the first album to feature Solinger and its first studio album in 8 years. In 2004, Dave Gara was announced as the new drummer.

Speaking in 2009 about the next Skid Row album, Hill said "we haven't sat down and recorded anything yet, but we have sat down and worked out some ideas and just played them on a handheld recorder. Everybody's writing and we're getting into that mind set. Once the wheels get in motion we'll all probably fly out to Atlanta spend a week or two up there come home, go back up there do it again, we're all living in different cities, which can make it difficult at times."

United World Rebellion (2013–present)
In February 2013 Skid Row signed with Megaforce Records, and stated the new material would be released as three separate EP's. The first chapter United World Rebellion: Chapter One, was released in April, with two more EPs set to follow in the following 12 to 18 months.

In February 2014, the band began working on the second EP. In August, Skid Row released the second chapter of the trilogy titled Rise of the Damnation Army. In April 2015, Solinger was fired from the band. Later that day it was announced that Tony Harnell, formerly of the Norwegian melodic metal band TNT, will replace Solinger. That same month the band released a re-recorded version of its early single "18 and Life" as a free download. In February, two months before Solinger's departure, Skid Row announced they were writing the third chapter of the United World Rebellion series. Harnell left the band in December, and former Dragonforce vocalist ZP Theart was filling in as the lead singer for concerts in 2016. In January 2017, Theart was named as an official member of the band.

In March 2018, it was revealed the band's next release for the United World Rebellion trilogy would now be a full-length album. In January 2019, a deluxe edition of Skid Row's self-titled debut album was released digitally, which included the original album remastered for the first time (with "Forever" added as the bonus track), as well as a recording of the band's April 28, 1989 performance at The Marquee in Westminster, California. In the summer of 2019, former Skid Row singer Sebastian Bach announced plans to perform the band's self-titled debut album in its entirety on tour as a celebration of its 30th anniversary, and issued an open invitation for the band to play on stage with him for the first time since their split, hoping it would result in a proper Skid Row reunion with Bach. Guitarist Dave "Snake" Sabo declined the offer, while former drummer Rob Affuso subsequently confirmed that he would be joining Bach on stage during the tour.