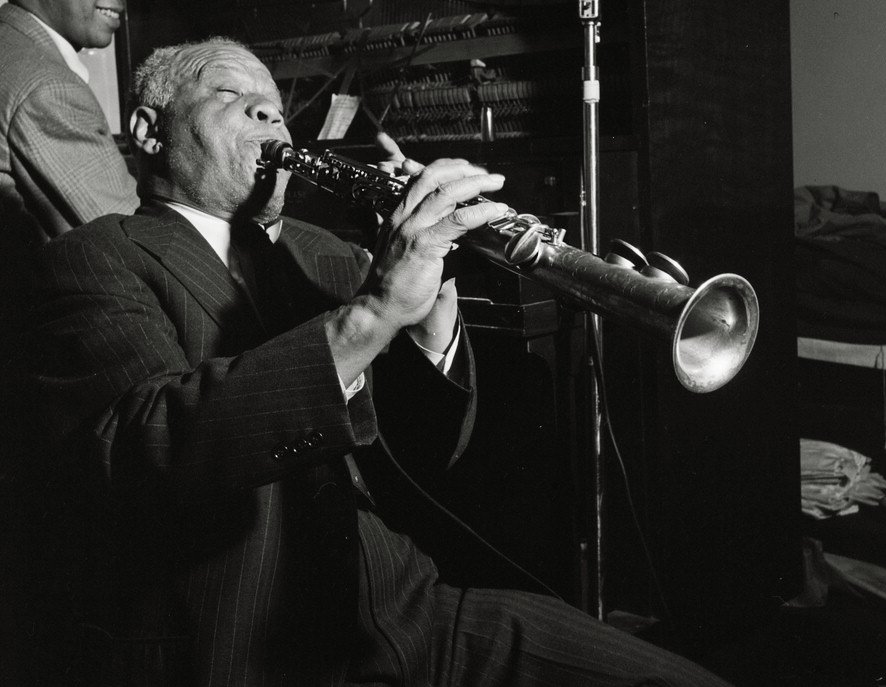 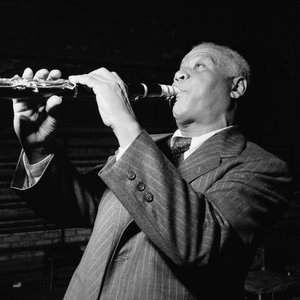 He was one of the first important soloists in jazz (beating cornetist and trumpeter Louis Armstrong to the recording studio by several months and later playing duets with Armstrong), and was perhaps the first notable jazz saxophonist. Forceful delivery, well-constructed improvisations, and a distinctive, wide vibrato characterized Bechet's playing.

Bechet's erratic temperament hampered his career, however, and not until the late 1940s did he earn wide acclaim.

Bechet was born in New Orleans on 14th May 1897. From a young age he was able quickly to master any musical instrument he encountered. Some New Orleanians remembered him as a cornet hot-shot in his youth. At first, though, he decided on the clarinet as his main instrument, and Bechet remained one of jazz's greatest clarinetists for decades. He is, however, perhaps best remembered as the master of the soprano saxophone. Bechet was the first notable jazz saxophonist of any sort, his playing characterised by forceful delivery, well conceived, improvised ideas, and a distinctive wide vibrato.

Bechet had experience playing in travelling shows even before he left New Orleans at the age of twenty. Never long content in one place, he alternated between Chicago, New York, and Europe as his base of operations until finally he settled in France in 1950. He married Elisabeth Ziegler in Antibes, France in 1951.

Bechet successfully composed in jazz, pop, and extended concert work forms. His recordings have often been reissued. Some of the highlights include 1924 sides with Louis Armstrong in "Clarence Williams Blue Five", the 1932, 1940, and 1941 New Orleans Feetwarmers sides, a 1938 Tommy Ladnier Orchestra session ("Weary Blues", "Really the Blues"), and various versions of his own composition, "Petite Fleur".

In 1941, as an early experiment in overdubbing at RCA Studios, he recorded on six different instruments: the clarinet, soprano saxophone, tenor saxophone, piano, bass, and drums. This recording can be heard under the title "Sheik of Araby".

Shortly before his death in Paris, Bechet dictated his autobiography, Treat It Gentle. He died on 14th May 1959 - his sixty-second birthday.

Bechet successfully composed in jazz, pop-tune, and extended concert work forms. He knew how to read music but chose not to, due to his highly developed inner ear; he developed his own fingering system and never played section parts in a big band or swing-style combo. His recordings have often been reissued.
Sidney Bechet's primary instruments were the clarinet and the soprano sax. His playing style is intense and passionate, and had a wide vibrato. He was also known to be very proficient with his instruments and a master at improvisation (both individual and collective). Bechet liked to have his sound dominate in a performance, and trumpeters found it very difficult to play alongside him.

Some of the highlights of his career include 1923 sides with Louis Armstrong in the Clarence Williams Blue Five; the 1932, 1940, 1941 New Orleans Feetwarmers sides; a 1938 Tommy Ladnier Orchestra session ("Weary Blues", "Really the Blues"); a hit 1939 recording of "Summertime"; and various versions of his own composition, "Petite Fleur".

In 1939, Bechet co-led a group with pianist Willie "The Lion" Smith that recorded several early versions of what was later called Latin jazz, adapting traditional méringue, rhumba and Haitian songs to the jazz idiom.

On July 28, 1940, Sidney Bechet made a guest appearance on NBC Radio's The Chamber Music Society of Lower Basin Street show, playing two of his show pieces ("Shake It and Break It" and "St. Louis Blues") with Henry Levine's Dixieland band. Levine invited Bechet into the RCA Victor recording studio (on 24th Street in New York City), where Bechet lent his soprano sax to Levine's traditional arrangement of "Muskrat Ramble."

On April 18, 1941, as an early experiment in overdubbing at Victor, Bechet recorded a version of the pop song "The Sheik of Araby", playing six different instruments: clarinet, soprano saxophone, tenor saxophone, piano, bass, and drums. A hitherto unissued master of this recording was included in the 1965 LP Bechet of New Orleans, issued by RCA Victor as LPV-510. On the liner notes, George Hoeffer quotes Bechet as follows:
"I started by playing The Sheik on piano, and played the drums while listening to the piano. I meant to play all the rhythm instruments, but got all mixed up and grabbed my soprano, then the bass, then the tenor saxophone, and finally finished up with the clarinet."

In 1944, 1946, and 1953 he recorded and performed in concert with the Chicago jazz pianist and vibraphonist Max Miller, private recordings that are part of the Max Miller archive and have never been released. These concerts and recordings are covered completely in John Chilton's authoritative book on Bechet.
Bechet was an important influence on the alto saxophonist Johnny Hodges, who studied with him as a teenager.

In 1919, Ernest Ansermet, a Swiss classical conductor, wrote a tribute to Bechet, one of the earliest (if not the first) to a jazz musician from the classical field of music, linking Bechet's music with that of Bach.

In 1968, Bechet was inducted into the Down Beat Jazz Hall of Fame.
The New York Times music writer Robert Palmer wrote of Bechet: "by combining the 'cry' of the blues players and the finesse of the Creoles into his 'own way,' Sidney Bechet created a style which moved the emotions even as it dazzled the mind."
"Bechet to me was the very epitome of jazz … everything he played in his whole life was completely original. I honestly think he was the most unique man to ever be in this music." — Duke Ellington.

The British poet Philip Larkin wrote an ode to Bechet in The Whitsun Weddings.

Sugar Blue, the renowned blues harmonica player, took his name from the Bechet recording "Sugar Blues", saying:
"I needed a nickname … all the good ones were taken! You know 'Muddy Waters', 'Blind Lemon', 'Sonny Boy' … until one night a friend and I were leaving a concert — a Doc Watson concert — when somebody threw out of the window a box full of old 78s: I picked one up and it said "Sugar Blues" by Sidney Bechet … That's it! I thought it was perfect … so here I am".
Bechet is said to have inspired the character of the saxophonist "Pablo" in the novel Steppenwolf. Hermann Hesse likely learned about jazz by listening to his playing in Europe in the 1920s.

In the novel Replay by Ken Grimwood, Bechet is featured performing at an underground Paris jazz club in the novel. This appearance is anachronistic as the scene takes place in 1963; Bechet died in 1959.

Bob Dorough, who played with Bechet, recorded a tribute song, called "Something for Sydney," on his Right On My Way Home album.

Van Morrison mentions Bechet in his song "See Me Through Part II (Just A Closer Walk With Thee)".

In the 1997 documentary Wild Man Blues, Woody Allen, the director and clarinetist, repeatedly referred to Bechet. He named one of his children adopted with his wife Soon-Yi Previn after Bechet.

Bechet is portrayed by Jeffrey Wright in two episodes of the television series The Young Indiana Jones Chronicles.

In the 2009 Disney animated feature The Princess and the Frog, Bechet is mentioned by Louis, the trumpet playing alligator, during the musical number "When We're Human."