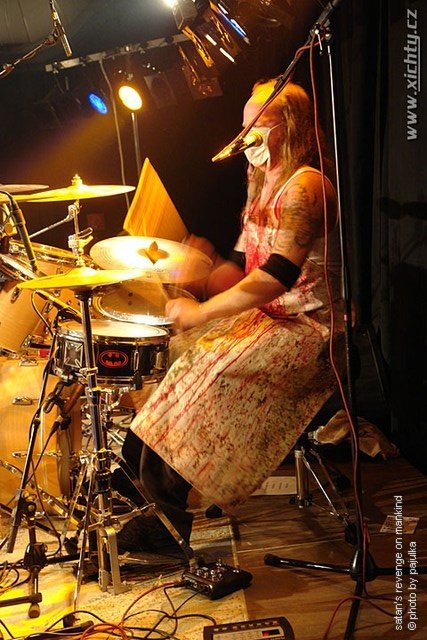 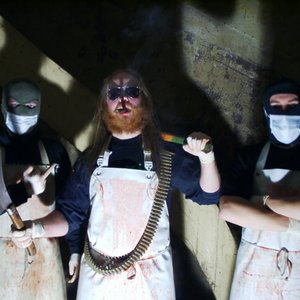 In autumn of the year 2004 after the birth of the jewish prophet the idea to establish the musical terror command that preaches the gore to the world today under the name Satan´s Revenge On Mankind begun to form.

At this time the split of Fleischwunde, once rulers of the rehearsal house Lobby, was obviously soon to come. Drummer The Almighty Mr.Goreblast devoted himself more and more to his liking gore grind and started writing lyrics for riffs that existed since long ago.The songwriting´s distinctive features emerged already now - old-school gore grind with the typical splatter lyrics and a definite message: praise the name of Satan or be part of the worthless mainstream with its trendy political correctness, anti-atom action groups, greenpeace, pseudo-alternative fuss, seed-eating and most of all its shitty music.

There was just one possible name for this project:

With Tomhet as guitarist and Helreath as bass guitarist two members of the death metal band Mortis Nex from Sangerhausen could be won as session musicians to record the tracks “Meat Is Good Food” and “Eat!Eat!Eat!” for a promo at the beginning of 2005. The rehearsals that were really fun and the reactions to the mini-demo led to making a band out of the project SxRxOxM.

Summer 2005 was time to record the full-length album “Goreblast” that was already predicted by the promo. At the same time the first gig should be done - at the Grindabalooza-Festival in Alberstedt. Beeing organized by The Almighty Mr.Goreblast and the Lobby members this meant to be a home match for SxRxOxM.This babtism of fire was quite successful and let loose the “Three Cocks From Hell” with its exclusive music called “Goat Gut Gore Core” on this world, always according to the motto: Satan, Gore & Meat.

Top Tracks
1) We Come To Eat You
2) Jesus Loves You Because He is Gay
3) Gorevolution
4) I Hate Music
5) Vaticandestruction
6) I hate nature
7) Meat Is Good Food
8) Invoking the glorious sado-nuclear extermination of the christian plague
9) Angels Taste Like Chicken
10) Hyperbrutal splattersatan
11) Techno Junkie Massacre
12) Satan Rules
13) Body Juice Blues
14) I Hate Neo-Grunge Pseudo-Punk Hippie-Brats
15) Psychopunch
16) I Vomit On The Altar And Shit In The Offertory bag
17) C.M.F.P.
18) World War Gore
19) Goat gut gore core
20) Belial's Finger Sticks In The Asshole Of The Pope
21) Eat! Eat! Eat!
22) Fuck You
23) Proud To Be A Perverted Cadaver Eater
24) Gorebeat (Born To Eat)
25) Headfukked by the bitchfork