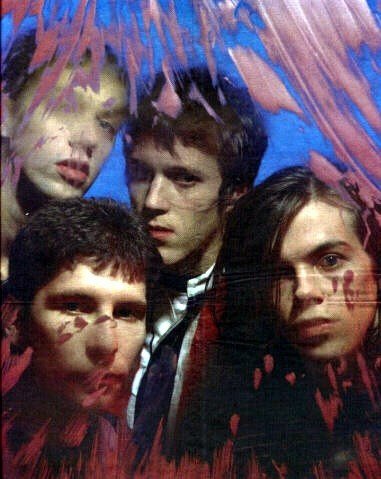 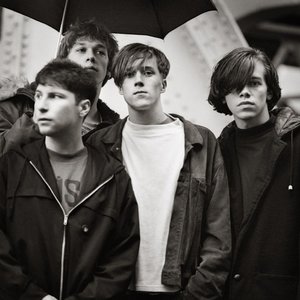 Ride is a shoegaze / alternative rock band that formed in 1988 in Oxford, England, consisting of Andy Bell, Mark Gardener, Laurence Colbert, and Steve Queralt. The band were initially part of the shoegaze scene that emerged in England during the early 1990s. Their debut album Nowhere (1990) has been named one of the greatest albums of the genre. Ride has released five albums: "Nowhere" (1990), "Going Blank Again" (1992), "Carnival of Light" (1994), "Tarantula" (1996), and "Weather Diaries" (2017).

Following the break-up of the band in 1996, members moved on to various other projects, most notably Bell who became the bassist for Oasis. In 2001, the band members briefly reunited for a one-off performance for a television show. On November 18th, 2014, the band announced their official reunion with tour dates in 2015.

Starting out (1988–1989)
Andy Bell and Mark Gardener had been to Cheney School in Oxford, appearing in the school's musical theatre productions, and in October 1988, they moved to Banbury to do Foundation Studies in Art & Design at North Oxfordshire College and the Oxfordshire School of Art & Design. There they met Laurence Colbert. Steve Queralt, who also went to Cheney School, was recruited from the local Our Price record shop where he worked as a singles buyer (although Bell and Queralt had already played together in an obscure reggae/pop band called "Big Spiderback"). After considering various names, the band settled for 'Ride', with its evocation of travel, and after the Ride cymbal. Bell has cited a performance by The Smiths as the inspiration for forming a band.

The band formed in the summer of 1988 and played their first gig as Ride for the College's Christmas Party towards the end of the year. While still at Banbury, the band produced a demo tape, recorded in Queralt's bedroom and hallway, including the tracks Chelsea Girl and Drive Blind. Queralt and his record shop boss and future Ride manager Dave Newton had started a live music night in Oxford called Local Support, and it was due to a cancellation by another band that Ride got their first proper gig at one of these nights. Jim Reid of The Jesus and Mary Chain heard a copy of the demo that was in the possession of the DJ Gary Crowley, and this led to interest from Mary Chain manager Alan McGee. After the band supported The Soup Dragons in 1989, McGee signed them to his Creation Records label.

Early Creation years (1989–1993)
Ride released three EPs between January and September 1990, entitled Ride, Play and Fall. All three EPs made it into the UK top 75, with Play and Fall reaching the top 40. Ride's top-75 placing was a first for Creation Records. The first two EPs were released together as Smile in the USA in July 1990 (and later released in the UK in 1992), while the Fall EP was incorporated into the CD version of their first album, Nowhere, released in October 1990.

The band were often labelled as part of the "shoegazing" scene, but the band rejected this, Bell stating "my first reaction was like, this is another boring tag. These days…that's pretty much still my reaction." Gardener said of the band's influences: "We liked the noisy bands of the time. When we were at art college we went to see My Bloody Valentine, The House of Love, The Stone Roses and Sonic Youth. I think these all had a lot of influence on us in the early days as they were great gigs.”

The band recorded two sessions for John Peel's BBC Radio 1 show in 1990, and their popularity with the show's listeners saw them with three tracks in the Festive Fifty that year, with Dreams Burn Down and Like a Daydream at numbers 3 and 4 respectively, and Taste at number 25.

Nowhere was a critical and commercial success, reaching No. 11 in the UK, and the media dubbed Ride "the brightest hope" for 1991. Demand for new material was high, and the band recorded another EP, Today Forever, released in March 1991. The EP marked a change in direction for the group away from the noisier early style. Ride made their first international tour to Japan, Australia and France later on that year. Tickets for the performances in Japan sold out within minutes.

In February 1992 the band broke into the UK top 10 with Leave Them All Behind, and the following month saw the release of the band's second album Going Blank Again. The strain within the band was already apparent, Bell stating "by the time the second album came out we were touring too much. We were tired. We then took time off, but it was too much time off.”

Change in musical direction (1994–1996)
Ride were able to see out 1993 riding on the success of Going Blank Again and a third LP was keenly anticipated. A double weekend of gigs with The Charlatans that year ('Daytripper') kept them in the public eye amid a wider lack of interest in the shoegazing scene. Their third LP, Carnival of Light, was released in June 1994, at a time when Britpop was the focus of the music press.

Produced by John Leckie and partly engineered by Nigel Godrich (future Radiohead producer) – except How Does it Feel to Feel? by Black Crowes producer George Drakoulias – and featuring a guest appearance on keyboards from Jon Lord of Deep Purple, the album was split between songwriters Gardener and Bell, with the former's songs making up the first half of the album and the latter's the second. Opening with the riff-heavy Moonlight Medicine, tracks also include From Time to Time, Birdman and a cover of The Creation's How Does It Feel to Feel?, which was released as a single.

The album was not well received by critics, Bell explaining "these were good times but the music took second place. When we recorded the Carnival of Light album we got indulgent." By the end of 1994 even the band themselves were critical of the album, referring to it within the group as "Carnival of Shite."

The breakup (1996)
1995 saw the dissolution of the band while recording Tarantula. Gardener and Bell had led the band away from their shoegazing roots to become more contemporary, hoping to change their style with the times. Queralt has remarked that the band had two future directions open to them, and they chose the wrong option. Gardener had become interested in dance music, and wanted Ride to incorporate that into their style, while Bell disagreed.

The track listing of Carnival of Light gives an indication of the tension that was mounting between the two guitarists, with the first half of the album being songs written by Mark Gardener and the last half of the album being songs written by Andy Bell - Andy Bell had refused to let his songs be interspersed with pieces written by Gardener. Years later Andy Bell explained "imagine an argument where the way you win, is by saying 'I don't want my songs on the same side of the album as yours' and it ACTUALLY HAPPENS. We were allowed by the people around us to behave like total babies."

By the time Tarantula appeared, the band was beginning to self-destruct. Bell penned most of the songs while Gardener provided only one - the tension within the band leading to an inability to write meaningful musical pieces. Castle on the Hill, written by Bell, was a lament for the band's situation and contains references to Gardener's self-imposed exile from the group. Gardener walked out during the album's mixing sessions, and the band announced their break-up shortly before its release in March 1996. The album was released and remained on sale for one week before being withdrawn.

Critics and fans alike had panned the album (although the first single off the album, Black Nite Crash, was awarded "single of the week" by weekly music magazine Melody Maker). The album was described by Allmusic as "an abomination of '70s/Lenny Kravitz clichés, full of third- and fourth-rate tunes and, ultimately, bad blood," going on to say "the words are just plain awful throughout, not even worth printing." Rolling Stone were more complimentary, stating "the album is saved from maudlin self-obsession because it's rawer and rocks harder than anything else Ride have recorded."

Since the break-up, both Bell and Gardener have been more reflective about the group's disintegration, with Bell especially admitting his own part in the process.

Post break-up years (1997–2001)
After the split, Andy Bell formed a new band called Hurricane No. 1 but this project was permanently dissolved when he was asked to play bass for Oasis after having turned down the opportunity to join Gay Dad. He lived in Stockholm during this period. Mark Gardener and Laurence Colbert joined with Sam Williams to form The Animalhouse. As BMG signings, they were successful in Japan. The band was, however, short lived and split in 2002. Gardener has also toured as a solo artist, while Colbert, Gardener and Bell have played in a Bob Dylan tribute band called The Zimmermen. Queralt appears to have retired from professional music. He spent the years following the break-up working in Oxford, playing 5-a-side football, and raising a family. He is now living in Hammersmith, London.

Channel Four and beyond (2001–2013)
On 16 October 2001, all four members of Ride agreed to be filmed by Channel 4. The footage was used for the show Pioneers, a documentary on Sonic Youth, and featured a twenty minute improvised jam. The recording of this song, plus two short sound checks, were released in 2002 as Coming up for Air. The interest in this limited release CD caused the band to consider future releases. In late 2002, Ride released a 3-CD box set which is made up of OX4_ The Best of Ride, Firing Blanks_ Unreleased Ride Recordings 1988-95 and Live_Reading Festival 1992. In 2003 they released Waves, a collection of tracks from five radio sessions recorded for the BBC.

Mark Gardener started pursuing a solo career. From 2003 to 2005, Gardener toured extensively, sometimes with the help of Oxford friends Goldrush, in order to personally fund a full-length studio album. During the tour, a three-track EP with Goldrush Falling Out Into the Night and a live album (the acoustic solo Live @ the Knitting Factory, New York City) were released. He also spent part of 2005 working with the French duo rinôçérôse. In late 2005, Gardener's album These Beautiful Ghosts was released in North America on United For Opportunity.

Any thoughts of permanently re-forming the band, however, have been explicitly denied by Bell, with the reasoning that it would not live up to expectations. However, the members, Bell included, have stated that they would not mind working with each other again. Since, Bell and Colbert made an appearance at one of Gardener's early shows; Bell later shared two nights of acoustic sets with Gardener in November 2003 when Gardener made a tour stop in Bell's current home of Stockholm.

Colbert has also started playing in a band again - as guitarist and vocalist. He also plays drums in different projects, most notably with the reformed The Jesus and Mary Chain, Supergrass (filling in for Danny Goffey), International Jetsetters with fellow Jesus and Mary Chain bandmate Mark Crozer, and Damo Suzuki (Can). In 2005, Gardener was stuck in France and unable to play the Truck Festival; Colbert's band filled the gap in the bill. Colbert studied on the 1 Year Diploma in Drum Performance at London's Drumtech after the split of Ride.

Reunion (2014–present)
On November 18th, 2014, it was announced that Ride officially reunited again, and will perform a series of tour dates in Europe and North America in May and June 2015. The band's fifth album, ''Weather Diaries'', was released on 16 June 2017 and peaked at #11 on the British charts.