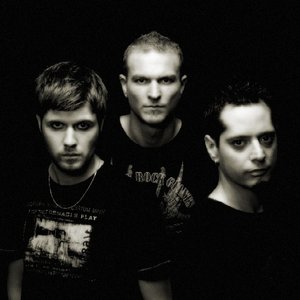 Band Biography
Zug in the beautiful and laid back Switzerland, where
not too much is going on except the breathtaking view
on the lake and one of the lowest tax rates in the
world, there Stefano (Saint) Paolucci (guitar & vocals)
started the Indierockband Redeem in 2003, with
Pascal Münger (bass) joining. They started to write a
couple of songs, in which Stefano’s unique voice
developed to a real feast for the ears.
In January 2004 the band decided to record their first
demo, which only took 2 days. Most of it was recorded
live, but with various drummers. Soon the demo was
sent to several record-labels in Germany and
Switzerland. The feedback was very positive and
Redeem very quickly got some offers from Labels in
Germany
After their first steps in the music business Redeem
recorded an album with producer Tommy Vetterli (ex-
CORONER, guitar) at the Newsound-Studio, Zurich.
After the album “Eleven” (tribute to Pearl Jam’s TEN)
was finished, a contract with record-label PointMusic
Munich followed. “Eleven” was released in October
2006 in Germany and Switzerland and get a Re-
Release in March 2008 with the German Distributor
ALIVE.
Critics brim over with enthusiasm for it and you can be
curious about it, where the way will lead to.
At the End of 2007 Simon Steiner joined and the band
benefits from his powerful Drumming.
Redeem’s first single “Alive” as well as the 2nd single
“Time” had high rotation on many Swiss radio stations,
and slowly but surely they conquer the airplay-charts.
Additionally VIVA Switzerland supports the three guys
with massive video rotation.
Last summer the band toured across Switzerland,
partly as support of bands like “Gotthard”, “Magnum”
and “-44”. Also they played big outdoor festivals like
“Rockfest” with Alice Cooper or “Jazzfestival
Montreux”.
In March of 2008 Redeem has been supporting
Daughtry on their last German tour.

And if you’re looking for redemption, listen …

Tourdates with 3 DOORS DOWN: