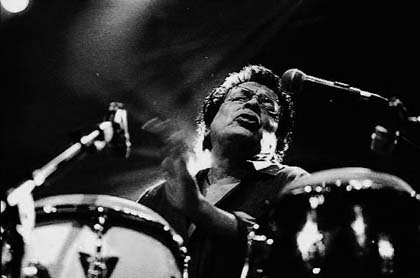 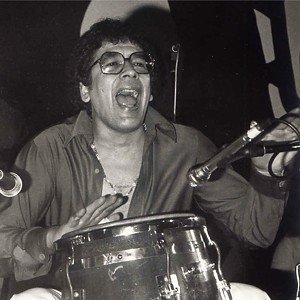 Ray Barretto, a percussionist extraordinaire and legend in the Salsa & latin Jazz music community has left the music scene with his death in February 2006 at age 76.
Born of Puerto Rican descendence in Brooklyn during the depression, he lived with his mother in East Harlem, The South Bronx and other "boricua" districts before he joined the army, where in the latter 1940's he heard Dizzy Gillespie's hard bebop. The young man was transfixed by Dizzy Gillespie - Manteca," which featured conguero Chano Pozo.

He started sitting in at a Munich jazz club, and after his discharge, by the early 50's he had bought his own Cuban Cnga drum and was playing regularly at clubs like The Bucket of Blood. Soon Mambo was the rage, and Barretto eventually started playing with Tito Puente in 1957, replacing the famed Mongo Santamaria. He became a band leader on his own by 1961, and had a big hit with his group Charanga Moderna and their boogaloo dance craze single called "el Watusi" in 1963 that was the first Latin record to hit the Billboard top 20, and went Gold.

Barretto is credited by some for bringing the African Conga drum into popular music, and had a crossover appeal that transcended the genre boundries of mainstream music categories. He gained recognition beyond the Puerto Rican music scene, ex. played on many Blue Note albums. He beacme associated with the Latin label Fania in the 1960's and played for three decades in the popular ensemble called the Fania All Stars alongsde Willie Colon, Ruben Blades and others. His 1972 album, "Carnaval", is considered a masterpiece amongst latin Jazz afficianados with the songs "Cocinando Suave" and his interpretation of Gershwin's "Summertime".

Highlights of Barretto's run with the Fania All Stars were their tours of spots like Panama, Puerto Rico and Zaire where they played to 80,000 in Kinshasa before the Ali-Foremen fight. Undoubtedly their sell out concerts at N.Y's Yankee Stadium in 1973 & 1975 would have to be included as well.

In 1975 and 1976, Barretto earned back-to-back Grammy nominations for his solo albums "Barretto" (with the prize-winning song "Guarere") and his double "Barretto Live…Tomorrow". By 1976, although he had stopped performing & touring with his live salsa orchestra, he was regularly voted Best Conga Player in music magazine annual polls. He became interested in jazz fusion forms, and pursued this musical passion despite it's lack of commercial appeal. Barretto felt restricted by the Salsa scene, it's conventions and strict danceable format, and did not like the tag Latin Jazz either.

He teamed with singer Celia Cruz in 1983 for the first of several albums, finally winning a 1990 Grammy with her for their 1989 song "Ritmo En El Corazon". In 1992, he formed the ensemble New World Spirit, and was inducted into the International Latin Music Hall of Fame in 1999.

He had recently been named best drummer in the 2005 DownBeat poll, and received the NEA's 2006 Jazz Masters Fellowship before his health declined. His recent albums "Taboo" (1994), "My Summertime" (1998) and his final album 2005's "Time Was - Time Is" all received Grammy nominations for best Latin jazz performance.