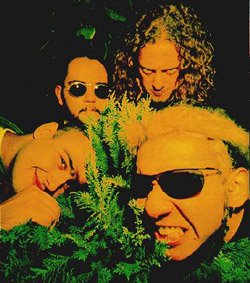 Raimundos is a Brazilian band, based in Brasília, Distrito Federal. Their genre mixes hardcore with elements of forro, a popular type of music and dance from Brazil's northeast.
The name Raimundos is derived from one of their greatest influences, the Ramones.
The band was formed in the late 80s by Rodolfo Abrantes (vocals), Digão (guitars), Canisso (bass) and Fred (drums). After doing some demo tapes, they released their first record by Banguela Records:
Raimundos (1994).

Raimundos became popular among the younger audience because of their "weird" appearance and their funny and sarcastic lyrics, full of profanity and slang. They broke into MTV Brazil, making their first hits "Selim" and "Puteiro em João Pessoa".

Lavô tá Novo was released in 1995, and became the most successful act of those days. "I Saw Your Saying (That You Say that You Saw)", one of the hit singles of their records, dealt with a fictitious meeting with Madonna. Other singles like "Esporrei na Manivela" and "Eu Quero Ver o Oco" easily appeared on radios and MTV.

It was followed by Cesta Básica (1996), a rarities album and then Lapadas do Povo (1997). "Lapadas" was heavier than the previous albums, changing the usual "forrocore" style of the band. "Andar na Pedra" became the most known music of the album.

Só no Forévis (1999) became the most sold album of the band, and made Raimundos known by audiences other than the ones which usually patronized them. "Mulher de Fases", "A Mais Pedida", "Me Lambe" e "Aquela" went to the top positions of the charts and MTV. The name of the album was a "spoof" on popular Brazilian music styles (including the members of the band dressed as a "pagode" group).

The last record with the original line-up was MTV ao Vivo, a live album recorded for MTV, with all their hits and some covers. The album included a cover of "20 e Poucos Anos", from brazilian popular artist Fábio Jr.. The song became the theme of MTV's reality show "20 e Poucos Anos" ( the Brazilian version of "The Real World"). The song was recorded in studio.

2001 saw the dismissal of Rodolfo from the band. Converted into an Evangelical Christian, he decided to quit the band because his life wouldn't fit anymore with the band itself. He formed in the same year Rodox, a christian rock/hardcore band, like Raimundos, but with more "christian-like" messages in the songs. The remaining members released Éramos 4 (translated as "we used to be 4") in the same year.

The name was directly related to Rodolfo being gone from the band. It included 13 Ramones covers and "Sanidade", song originally recorded in the earlier times of the band, featuring Digão in the vocals. Some people say that the song was included there as an "answer" to Rodolfo.

In the same year, Digão decided to definitely assume the vocals and call Marquinho, who was in the underground band Peter Perfeito. In 2002 the new formation released Kavookavala. Putting into the sound more hardcore influences, the album wasn't so successful as the others, but the reputation of the band wouldn't be damaged. Canisso left the band in 2002, saying that he was tired of being with the band. Alf, vocalist of Rumbora, was brought in to be the bassist.

The last release of the band was an independent EP .Qq cOisAh EP, in 2005. The band still tours around Brazil, showing their hits and new songs, apart from the fact of some fans being more attuned with the original and most famous line-up of the band.