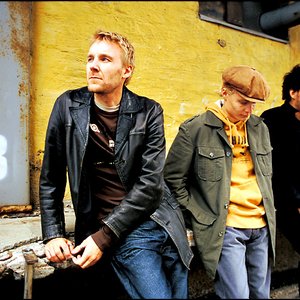 Poets of the Fall

Poets of the Fall is a rock band formed in 2003 in Helsinki, Finland composed of singer Marko Saaresto ("Mark"), guitarist Olli Tukiainen ("Ollie") and keyboardist Markus Kaarlonen ("Captain"). They gained their first fame by recording the title theme of Max Payne 2, Late Goodbye. In June 2004 it was later released as a single and followed by Lift in September, which turned out to be a big hit. Their first album, Signs of Life was released in January 2005 and immediately went to number one on the Finnish Top40 list and remained on the chart for over a year. Their sophomore record Carnival of Rust was released in April 2006, preceded by a title track single, Carnival of Rust in March and providing another hit. The next singles were Sorry Go 'Round and Locking Up the Sun. Both albums have reached platinum status in Finland.

The name, Poets of the Fall, comes from the idea that two opposites form a whole, ie. there isn't one without the other. "Poets" here represent the positive side and "the Fall" the negative. Of course, when you join these two concepts, the "Poets" starts to sound just a tad mischievious as well… depends, of course, on how you perceive "the Fall". You might see it as a beautiful crisp season and the "Poets" are its insightful architects…

Among many others, the trio has received the following awards: