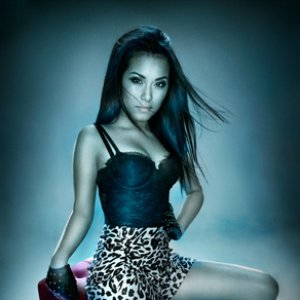 "Some days are good, some days are bad, but every day of my life is spent with music in some way. Since the age of 13, I've known exactly what I wanted out of life - abnormality! Which is how I became a musician. Music was my crutch in my small hometown of Denton, MD. I started playing at venues all over MD when I was a teenager with just an acoustic guitar, then on to an electric and started a groovy little high school band. I met my manager, Mike Marucci, through some of those shows and he eventually introduced me to producer, Jim Ebert (Butch Walker, Marvelous 3, Meredith Brooks). Jim and I have worked together on a few records: 'The Other Side of Me' (EP), 'Lush', and 'Go' (EP). 'Lush' was my first full-length record, which included some co-written songs with Butch Walker, The Matrix, Wizardz of Oz, Mathew Gerrard, and Stephen Lironi. The single 'Wasted Time' became the #1 single on Sky Radio in the UK for over 6 weeks. Soon after, we released 'Go' from an EP and it managed to sit atop Sky Radio for over 8 weeks in the UK.

My solo act morphed its way into a 'band' within the past few years and together, we wrote, recorded, and produced our latest EP 'Bloom' as the Niki Barr Band. In support of the records, we've been fortunate to share the stage with Joan Jett, Paramore, The Offspring, The Cult, Papa Roach, Shinedown, Puddle of Mudd, Third Eye Blind, and Red Jumpsuit Aparatus. We've also toured internationally with the Armed Forces Entertainment, performing for the US Troops in the Middle East, Japan, UK, and many other countries throughout Europe and Southeast Asia. The tours brought us support from Billboard, Rolling Stone, The Wall Street Journal, Time Magazine, and NPR Radio's “Border Crossings with Larry London".

As of late, I'm spending my days writing songs for the new record, which we hope to release by the Fall/Winter of 2009!"