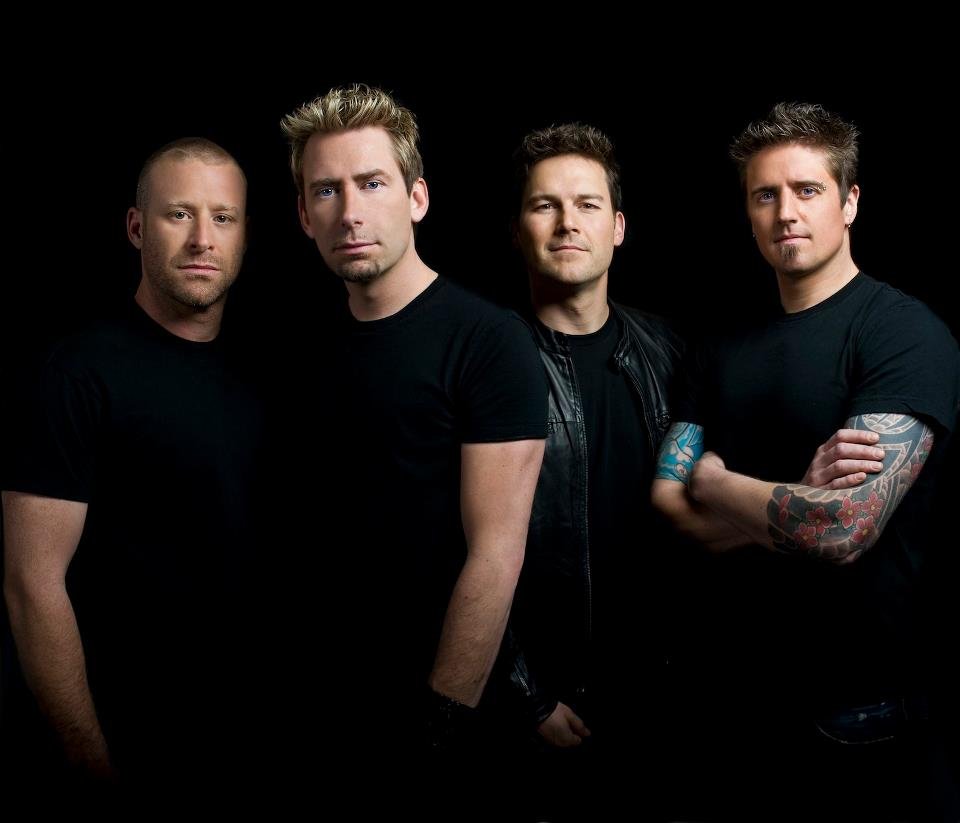 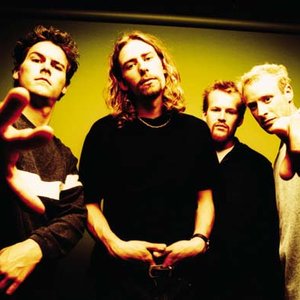 Nickelback is a rock band which formed in Hanna, Alberta, Canada in 1995. Nickelback is one of the most commercially successful Canadian groups, having sold 30 million records worldwide. Nickelback ranks as the 11th best selling music act of the 2000s, and places as the 2nd best selling foreign act in the US behind The Beatles for the 2000s.

The band is now based in Vancouver, British Columbia, Canada. Its name originates from the nickel in change that band member Mike Kroeger gave customers at his Starbucks job, he would frequently say, "Here's your nickel back".

The band is signed to EMI in Canada and Roadrunner Records for the rest of the world. In July 2008, the band signed with Live Nation for three touring and album cycles, with an option for a fourth cycle. The contract includes recordings, touring, merchandise and other rights.

The band was formed in the early 1990s as a cover band called the "Village Idiots" by Chad Kroeger, Ryan Peake, Mike Kroeger, and Brandon Kroeger. The band performed covers of songs from Led Zeppelin and Metallica. Nickelback's first release was a seven-track EP called Hesher in 1996. In the same year, Nickelback recorded their first full-length album Curb. "Fly" was released on Hesher and Curb and was the first single produced by Nickelback. It did not chart and was only played on local radio stations.

The following album The State was recorded in 1998 and was released as an independent record the same year. Nickelback signed a record deal with EMI and Roadrunner Records. The State was then re-released in 2000 by EMI and Roadrunner Records. Two singles from the album, "Leader of Men" and "Breathe" were fairly successful and resulted in the album being certificated gold in Canada and the United States. It was certified Platinum in 2008.

In 2001, Nickelback released the Silver Side Up album, which propelled them into the mainstream. The single "How You Remind Me" was a huge success, peaking at #1 on both the American and Canadian charts at the same time. In the U.S., it was a #1 single on the Mainstream and Modern rock charts, as well as the pop chart. It also peaked at #2 on Adult Top 40. "How You Remind Me" became the Billboard Hot 100 #1 single of the year for 2002. The next single was "Too Bad", which also hit #1 on the Mainstream Rock Chart and had a small amount of success on the pop chart. The final single from the album was "Never Again", another #1 hit on Mainstream Rock.

In 2003, Nickelback released The Long Road. The lead single was "Someday" and the album went on to sell five million copies worldwide. The band also released "Feelin' Way Too Damn Good" as a single, which peaked at #3 on the Mainstream Rock Charts. "Figured You Out" was also released as a single and topped the Mainstream Rock Charts for 13 consecutive weeks.

After taking much of 2007 off, the band started recording a new album in earnest. In July 2008, the band signed with Live Nation for three touring and album cycles, with an option for a fourth.

On September 4, 2008 Roadrunner Records announced that the first single from their upcoming album was originally going to be "If Today Was Your Last Day" and was to be released September 30, 2008. However, the song was scrapped as the first single, and "Gotta Be Somebody" was the lead single instead. The new album, titled Dark Horse, was released on November 18, 2008. The album was produced by Mutt Lange. Something in Your Mouth was released as the second single to rock radio only on December 15, where it reached #1. "If Today Was Your Last Day" was released as the second major single instead. Two more singles have been released,"I'd Come for You" and "Burn It to the Ground".

The album also remained in the top 20 on the Billboard 200 for weeks after its release. The album was certified two times platinum in April 2009, and had by April 2010 sold over 3 million copies in the U.S. However, critical reception of the album has been mostly mixed to negative. In 2009, the band won three Juno Awards for Juno Fan Choice Award, group of the year, and album of the year; the band performed their single "Something In Your Mouth" at the ceremony. In 2010, Billboard year end charts listed Dark Horse as the top-selling rock and metal album of the year. The band was also listed at the top selling hard rock artist. On January 29, 2010 they released a Tap-Tap rhythm game for on the App Store, contrary to the band's prior comments against other music related video games such as Guitar Hero. On February 28, 2010, Nickelback gave a performance at the beginning of the concert portion of the 2010 Winter Olympics closing ceremony, performing "Burn It to the Ground". On October 2010 Nickelback finished their Dark Horse Tour.

Here and Now 2011-present
Chad Kroeger said in an interview with Billboard.com in September 2010 that songwriting for the next Nickelback album was planned to commence as early as February 2011 with "about four tunes" already in mind. Adair mentioned that the band wanted to go back to the musical style of All The Right Reasons, which he described as "more organic."

Nickelback announced their new album, Here and Now, on September 8, 2011, along with its two lead singles, "Bottoms Up" and "When We Stand Together". Kroeger said “We’re four people who love making music, the way we like to make it. We entered the studio this year with a vision, and it all came together. We’re extremely happy with the results, and can’t wait to share them with our fans.” The album was released on November 21, 2011, with the band calling it "Nickelblack Monday", a play on Nickelback and Black Monday. Two singles were released to radio stations on September 26, and September 27 for purchase on iTunes.

Here and Now peaked at number two on the Billboard 200, selling 226,714 copies in its first week of release, with Christmas by Michael Bublé taking number one by a margin of only 419 copies

According to an interview with Chad Kroeger, the band planned to release a greatest hits album in 2013 and a new album in 2014. The band officially announced the compilation album The Best of Nickelback Volume 1 through social media on October 3, 2013. Frontman Chad Kroeger had previously stated in an interview that the greatest hits album was to feature songs from previous albums along with new songs but the unveiled track listing ultimately contained only previously released material.

In various points in their career, Nickelback has received widespread negative reviews from various sources. Review aggregator Metacritic reports the three of their most recent studio albums since becoming a mainstream act, The Long Road, All the Right Reasons and Dark Horse, to have scores of 62%, 41% and 49% respectively.

They have at times, been ridiculed for their lack of originality. In 2001, Rolling Stone criticised the band's musical style, saying, "if you're looking for originality, you might want a full refund instead of a Nickelback." Rolling Stone also said their 2003 release, The Long Road, was "Brazenly consistent, if unimaginative." Whilst Allmusic also stated, "Nickelback can now afford a little more time in the studio and a little more time to indulge themselves, and they turn out the same record, only slicker, which only highlights just how oppressively and needlessly sullen this group is."

In 2005, Rolling Stone said "All the Right Reasons is so depressing, you're almost glad Kurt's not around to hear it." Tiny Mix Tapes also expressed concern over the release; "Like all Nickelback releases before it, All The Right Reasons was made for all the wrong ones and follows all the formulas and clichés you should be bored to death of by now." Stephen Thomas Erlewin of Allmusic reviewed Dark Horse, claiming that "Nickelback are a gnarled, vulgar band reveling in their ignorance of the very notion of taste, lacking either the smarts or savvy to wallow in bad taste so they just get ugly, knocking out knuckle-dragging riffs that seem rarefied in comparison to their thick, boneheaded words."

Despite a barrage from critics, Nickelback has still managed to please various sources with each of their mainstream albums. Allmusic reviewer Liana Jones complimented Nickelback after their commercial breakthrough, Silver Side Up; "what gives the group an upper hand over its peers is intensity and raw passion… Nickelback ups the ante by offering realistic storytelling that listeners can relate to." Following their 2008 album, Dark Horse, ChartAttack credited the band's success to knowing their target audience, "Chad Kroeger is a genius because he knows exactly what people want and precisely how far he can go. He turned out an extremely racy album that's loaded with songs about gettin' drunk and doin' it all without breaking any taboos, and with enough love and moral authority to grease its passage into the mainstream. Rejoice, North America. This is your world." Billboard also praised the band; "The bulletproof Nickelback provides affordable fun that promises good returns in hard times."

In 2007, USA Today reported that "few bands inspire such intense hatred as Nickelback." The article questioned whether Nickelback's commercial success made "critics wrong", and published multiple statements from various sources within the music industry. Nathan Brackett, a senior editor at Rolling Stone said, "There are some bands that, let's face it, are critic-proof". Both Brackett and Craig Marks, editor in chief of Blender, credit a lot of the band's success to young people who are introduced to them on the radio and "very casual music fans who don't buy a lot of CDs". Marks complimented Nickelback's popularity despite the critical response, saying "it is a tribute to their success."

Chad Kroeger was married to Avril Lavigne until 2015.