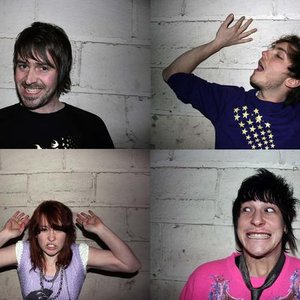 Hailing from Doncaster, UK; NEON PLASTIX live on the sunny-side but cross over the tracks to practice, where they call an industrial welding estate home and nobody minds the electro pop disco racket there! Since2005 they’ve taken over their home town with an explosion of sound, playing their take on influences ranging from Devo, Talking Heads, U2, Japan, to The Rapture, The Faint, Hall and Oates…

Neon Plastix have supported bands including Klaxons, Robots in Disguise, Test-Icicles, The Duels, The Blood Arm, Good Shoes, Howling Bells, Clor, The Young Knives, The White Rose Movement and The Infadels as well as playing launch parties for Vice Magazine in both Antwerp and Amsterdam. They also completed their self-titled UK ‘Tour O’ Doom’ (complete with onstage exercise machine for any willing members of the audience) taking in the Barfly venues around the country and culminating in a Club NME headline slot at London’s KOKO. Despite only having released 2 limited double-A singles to date “prick tease / neon invasion ” and "dream / on fire " (gaining support from Steve Lamacq on Radio 1), Neon Plastix have gained a big cult following both in the UK and abroad, even securing deals with E.A Games and Sony Eriksson for use of their music and landing a spot at Glastonbury.

After taking what seems like one hell of a siesta, Neon Plastix released their long awaited debut LP “awesome moves ” on Blow Up in May 2010.

"These new-wave songs force a grin regardless of gender. An impassioned and feel-good statement of intent." NME

"Doesn’t it just conjure up the pungent whiff of hair gel and cheap fluorescent spirits?" Drowned In Sound

"A blurry mix of electric punk and poppy sounds, reminiscent of Talking Heads and acid punk of The Rapture.” CD Times