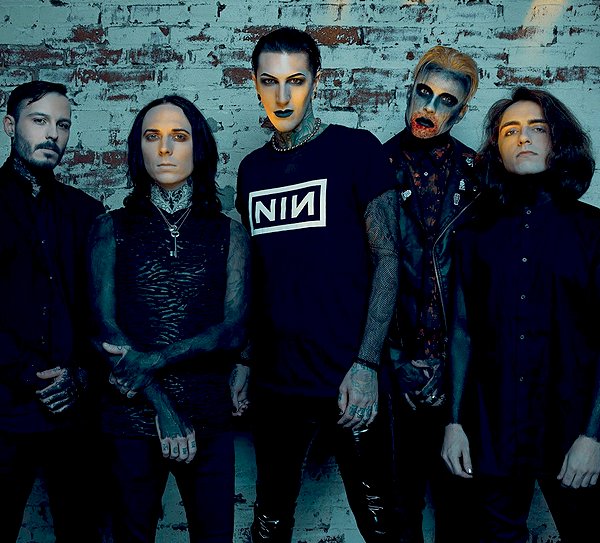 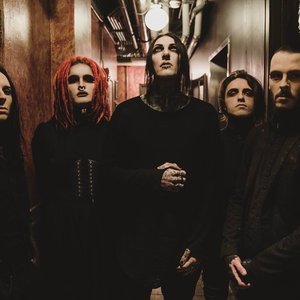 Motionless in White is an American alternative metal band from Scranton, Pennsylvania. Formed in 2005, the band currently consists of founder Chris "Motionless" Cerulli (lead vocals), Ricky "Horror" Olson (rhythm guitar), Justin Morrow (bass), Ryan Sitkowski (lead guitar), and Vinny Mauro (drums). The band has stated that their band name is from the Eighteen Visions song, "Motionless and White". Motionless In White has gothic, horror themed lyrics and a gothic rock and sometimes industrial metal sound, goth appearances, and their intense gigs. Their first album, Creatures, reached #175 on the Billboard 200 on its release in 2010. Their second album, Infamous, charted in many parts in the Billboard stats: #53 on the Billboard 200, #19 on Top Rock Albums, #9 on Top Independent Albums, and #5 on Top Hard Rock Albums.

Motionless in White was founded in 2005 by members Chris Motionless, who played guitar and lead vocals, Angelo Parente on drums, Frank Polumbo on guitar, and Kyle White on bass during high school. With a sound, at the time, being influenced by alternative rock, emo and post-hardcore bands, they then changed to melodic metalcore and gothic metalcore sound.
Within the year after the release of their demo, new member Josh Balz was added as the band's keyboardist, Frank Polumbo took over on bass and new members, Michael Costanza and TJ Bell were added to the band as the new guitarists, moving Chris Motionless solely to lead vocals.
In 2007, they recorded their first EP The Whorror and released it the same year through Masquerade Recordings. After touring in support of The Whorror, Motionless in White had written enough songs to complete a full-length album. The album was named When Love Met Destruction. It was recorded in 2008 initially at Soundmine recording studio then finished at Zach Neil's home by Dave Cutrone and Zach Neil, and was released the same year on Masquerade Recordings.

After the release of When Love Met Destruction, bassist Frank Polumbo departed Motionless in White due to unknown reasons, leaving Bellevue, Washington native, Ricky "Horror" Olson as their new permanent bass player in October 2009. Months later, Motionless in White entered the studio during May 2010 to record their debut full-length, Creatures, released in October 2010 through Fearless, and claimed the 175th slot on the Billboard Top 200 charts, and No. 6 on the Heatseekers chart.

In early 2012, Motionless in White contributed to the Kerrang! Metallica The Black Album: Covered on the song, "My Friend of Misery."
Motionless in White decided on working with two separate producers to accomplish a very wide array of sounds and styles for Infamous. It was then announced that Infamous was to be produced by Jason Suecof and musician Tim Sköld. On September 25 "Devil's Night" was released as the first single for the album. On November 13 2012, the music video for the single "Devil's Night" was released, along with the full album itself. Infamous initially hit No. 53 on the Billboard 200, No. 19 on Top Rock Albums, No. 9 on Top Independent Albums, and No. 5 on Top Hard Rock Albums. On April 23, the band released the third single from Infamous, "America", accompanied by a lyric video. On June 3, another video, directed by Slipknot percussionist Shawn Crahan, was released for the single. The video also starred Slipknot percussionist Chris Fehn. On June 11, 2013, Motionless in White released the Deluxe Edition of Infamous, featuring remixed and remastered versions of all the original tracks, alongside two new songs, remixes by Celldweller, Combichrist and Ricky Horror, and re-recorded drums by Richter.

On 2014, February 5, the band confirmed that they covered "Du hast" by Rammstein for the Punk Goes… compilation series, Punk Goes 90s Vol. 2. On April 23, 2014, the band's third studio album, Reincarnate, was announced through social media, with an intended release date of September 16, 2014, also included featured artists such as; Dani Filth of Cradle of Filth in "Puppets 3 (The Grand Finale)", Maria Brink of In This Moment in "Contemptress" and Tim Sköld in "Final Dictvm".

In early 2016, vocalist Chris Motionless has stated that their new album will not be released through Fearless Records. On June 23, 2016, Motionless In White released the single titled "570", from the band's forthcoming studio album, which will be released via Roadrunner Records. On October 31, Roadrunner announced the album was to be titled Graveyard Shift. The band reached out to the fans with a contest to design the new album's artwork. The album also features a collaboration with Korn frontman Jonathan Davis on the song "Necessary Evil". On January 26, the band released the second single from Graveyard Shift, titled "Eternally Yours". A day later, it was revealed that Graveyard Shift is set to be released on May 5, 2017. On March 3, the band released their third single, "LOUD (Fuck It)".

On May 6, 2018, Chris Motionless announced via Instagram that a new record would be released in 2019. He claimed that he, along with Ryan Sitkowski and Ricky Olson, would begin full-time writing prior to touring with Warped Tour that summer. On April 17, the band announced their new album Disguise set for release on June 7, 2019. On the same day, they released two singles off of the album titled "Disguise", which had been premiered at Earthday Birthday in Orlando a few days prior, and "Brand New Numb". On May 10, the band released their third single "Undead Ahead 2: The Tale of the Midnight Ride" and its corresponding music video. On June 5, a few days before the album was due to drop, the band premiered the song "Thoughts & Prayers" on BBC's Radio 1's Rock Show with Daniel P. Carter. This was the first appearance of lead guitarist Ryan Sitkowski performing vocals on a record. On June 27, the band released a corresponding music video for their second single of the album, "Brand New Numb".

In May 2020, during a livestream interview, Chris Motionless announced that they were already working on their next album, and assured that the songs for the album will be heavier, although the recording could be delayed due to the COVID-19 pandemic. On September 9, the band released their cover of The Killers' "Somebody Told Me" on streaming music services. On October 23, 2020 the band released a single "Creatures X: To The Grave" in celebration of the Creatures 10th anniversary. The era-defining song is a true throwback to the album that helped start it all for Motionless In White. Chris Motionless revealed that “Creatures X: To The Grave” was inspired by “Creatures” and has similar elements to the original song that fans will easily recognize. To further celebrate the milestone, Motionless In White hosted a special deadstream event that happened on October 28, where they performed Creatures full for the first time ever. During the performance, they also debuted “Creatures X: To The Grave” live for the fans that tuned in.

On May 14, 2021, the band released “Voices: Synthwave Edition” a mellowed out and haunting version of the song “Voices” off their 2017 album, “Graveyard Shift.”
This latest addition to their discography is the last of what they call their “2020 Quarantine Experiments.”

After celebrating the ten year anniversary of their debut album 'Creatures' with their first one deadstream, Motionless In White announced the details of a second 'deadstream' event.

On June 9, the band performed at the Pennhurst Asylum in their home of Pennsylvania. A building with a dark and distressing past, it is also said to be one of the most haunted spots in the whole state. Set against the backdrop of beautifully sculpted stone angels, shadow-filled windows, and creaking lanterns, the deadstream at the Pennhurst Asylum was a dream come true to the band according to the lead singer Chris Motionless.

On July 1, they released the music video for Thoughts & Prayers, the last one off their album Disguise released in 2019.

On August 20, Motionless in White released a new song called "Timebomb". An accompanying music video, which was directed by Logan Beaver.
Motionless in White frontman Chris "Motionless" Cerulli stated about the track: "We are really excited to release a new piece of music to bridge the gap between all of the COVID downtime and our next record coming in 2022. 'Timebomb' felt like a great stand-alone track to touch on the heavier side of the band and to give fans something to headbang to during our return to touring this September. It feels so good to be getting back to work, and 'Timebomb' feels like a perfect way to celebrate the 'next normal.'"

On March 11th, Motionless in White have just announced the details of their new album, Scoring the End of the World and have debuted a music video for the lead single, "Cyberhex."