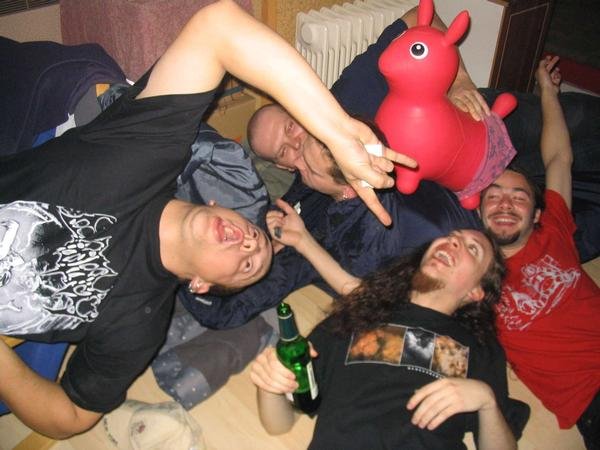 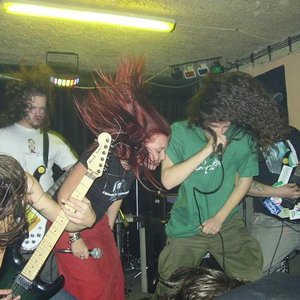 M.F.A.G.C.O.Q.D. was formed in 1996 by vocalist Topi (PIGSTY) and guitarist Mrkev. But first 4 years they were not playing, because they had no instruments, so they were only sitting in a pub, drinking beers and talking about "how good will it be when they will have a band" :o). In 2000 bass player Rybíz joined in and they start playing. First, Topi was also a drummer (but very bad), so in 2001 there came a new member - drummer Cibula - and the band started to play very fast grind core. In February 2002, I (Reef -ANTITREND Zine), joined the band as a second vocalist. One month after that, they went to studio Policna to record their debut CD called "Lamentations". It contains 15 trax in furious dement-grind style grindcore and it was released by Bizarre Leprous Production in summer 2002.
After this release there came first really important gigs during summer 2002 - Mincing Fury performed on Fekal Party Festival, Obscene Extreme Festival and Brutal Assault Festival. In Spring 2003 there came first gigs abroad - in Austria, Poland, Swiss and Germany (Just Killers Fest). Soon after that bad things happened - drummer Cibula and bassist Rybiz left the band (both by personal reasons) and band was about to end. Nevertheless Mrkev and Reef started to work on new material. In Summer 2003 bassist Fik (ex- CRATE) joined the band and in August we recorded new material with the help of drummer Jarin (ALIENATION MENTAL). One half of this material was released as the split CD with SCREAMING AFTERBIRTH called "No Jokes With Devils" (Autumn 2003) under Bizarre Leprous Prod. At the end of year 2003 Bibin joined the band as the second guitarist.
In Spring 2004 US label Burning Dogma Rec. re-released debut CD as "La-mentations" with new layout, bonus video and remixes.
In June 2004 another US label Last House On The Right Rec. released second part of 2003's summer material as MiniCD „Eye For Eye“.
In July 2004 band hits the road on first European tour through Czech Republic (Obscene Extreme Fest.), Germany, Swiss, Italy, Holland and Belgium (Death Metal Fest) with SCREAMING AFTERBIRTH (US) and CONTRASTIC (CZE).

In September 2004 band played on Gore Festival in Germany. At the end of the year 2004 new drummer Krsak joined the line-up.
In March 2005 band played few gigs in Austria and in September 2005 band performed on NRW Deathfest in Germany and in October on Grind The Nazis Scums fest also in Germany. During summer 2005 singer Topi decided to leave band. Soon enough he was replaced by girl-singer called Red Alert.
After tour through Poland (November 2005) with MENTAL DEMISE (UKR) and PARRICIDE (POL) band concentrated only on the preparation of the new material.
New CD entitled "7" was released during spring of the year 2006 under Bizarre Leprous Prod. Red Alert left the band after few months and she was replaced by second singer called Mrtvola. He is left the band at the end of 2006 and now into position of second singer came new guy entitled Milcunt. At the moment band prepare new material for upcoming split CD with US friends MUCOPUS, supported EU tour is in plan for July 2007.
Bad news came in november 2007 when Mara, Fik and Milcunt left the band for personal reasons. They all have a new grind core band called Spineless Fuckers. We wish them all the best in their future musical activities as well as in their personal lives… Right now we are concentrating on composing of new killer stuff and on search for new guys that will fill the empty positions..
In january 2008 we found a new bassist!!! His name is Pyjus Vypitkowicz aka Had, known for example from bands like Orfell, Search Mystery or still actually performing in Japka.
Some more personal changes happened in summer 2008. Krsak left the band for personal reasons. Not long after Bibin decides to leave the band too for his new band.
However this looks like the very end of Mincing Fury, Reef and Had and Milcunt found new members and are rehearsing again! New members are: Motorak - guitar and Zahradnik - drums. New full lenght CD entitled "Devolution" it just out under UNITED GUTTURAL from USA. CHECK IT OUT!