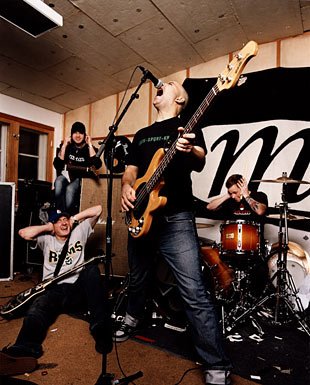 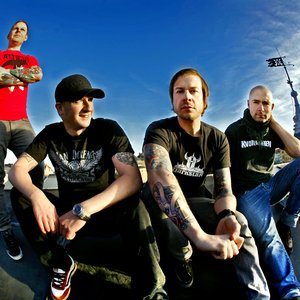 Millencolin is a punk rock band that was formed in October 1992 by Nikola Šarčević, Mathias Färm, and Erik Ohlsson in Örebro, Sweden. In early 1993, drummer Fredrik Larzon joined the band. The name Millencolin is derived from the skateboard trick "melancholy".

The original lineup, consisting of Šarčević (vocals & bass), Ohlsson (guitar), and Färm (drums), released their first demo tape, Goofy, in early 1993. Soon afterwards, Larzon joined the band to play drums, allowing Färm to perform as the second guitarist. In the summer of 1993, they recorded a second demo tape, Melack. The band sent the tape to Burning Heart Records, a new record label formed earlier that year. They signed Millencolin to do a CD single, which culminated in the release of Use Your Nose in November 1993. Success of the single prompted Burning Heart to sign the band to release a full album. In July 1994, the band released Skauch, initially planned to be a single for their new album. However, the band decided to record four cover songs as well and released it as an EP instead. They put out their first major release, Tiny Tunes, in 1994. The recording and mixing of the album took two weeks. Legal trouble with Warner Brothers over the title and cover artwork of the album led the band to re-release it in 1996 under the name Same Old Tunes.

Millencolin continued to tour and in 1995 brought out their second full-length album Life on a Plate. This coincided with Millencolin beginning to tour outside of Scandinavia. At the end of 1995, the US record company Epitaph wanted to release Life on a Plate in the US, and the band agreed. They then toured further afield, touring Japan, Australia, Brazil and Canada, and played as part of the 1997 Warped Tour.

Further albums For Monkeys and compilation The Melancholy Collection followed, but the band's popularity increased in 2000 with the release of Pennybridge Pioneers, an album with more of a rock influence than the band's previous skate punk/ska punk sound. The recording took six weeks and they started their first major worldwide tour. Millencolin played in Wellington, New Zealand, followed by an Australian tour. This led to an early release of the album in Australia and New Zealand. Millencolin wrote on tour and release Home from Home in 2002. In 2003, the band received the Best Swedish Rock award from the Swedish Hit Awards.

Kingwood, released in March 2005, marked the band's return to a faster and more traditional punk rock sound, collaborating it with their recently founded rock sound, and completed a world tour in follow up of the album. The album debuted at No. 2 in the Swedish chart.

On October 22, 2007 the band entered the studio to start writing and recording songs for their seventh album Machine 15.

The band has hosted a skateboard contest at their own skatepark in Örebro, Sweden named the Millencolin Open. They say they started this annual contest because skateboarding is what brought them together and now they have the chance to make something good of their town and of skateboarding.

They wrote and released a single dedicated to their hometown football club Örebro SK titled Örebro in 2009. It was played in the stadium for the first time on May 11, 2009 in the home game vs Hammarby Fotboll.

In 2010, they toured in Canada and South America, where they played Pennybridge Pioneers in its entirety. They also played the 2011 Soundwave Festival in Australia.

In 2012 Millencolin celebrated 20 years as a band, they simply put up their own festival. "Millencolin 20 Year Festival" was a 2-day Open Air Festival at Brunnsparken, Örebro, Sweden on the 8th & 9th of June 2012. Millencolin closed both nights by doing two exclusive sets from the band’s entire 20-year long career with different songs each night. In addition to Millencolin, a bunch of international and national bands has played on stage. A temporary festival site was built, including a huge catering tent with food and drinks. Besides this, WESC presented a skate contest with invited pro skaters. There were also a camp just 5 min from the festival and with their own waterpark.

The band announced on facebook a limited "yellow bird" toy would be available in the festival but due on delay in the production the sale was only possible in future tours. Carry You single from the compilation album The Melancholy Connection was released on vinyl limited to 500 copies in this festival.

On April No Fun At All canceled their appear at 20 Years Festival due their disbandment . So then the canadian trio Danko Jones was invited to join it the festival.

A Day To Remember's Jeremy McKinnon has stated that Millencolin has been a big influence on A Day to Remember.

On May 29, 2012, Millencolin released The Melancholy Connection, a follow-up compilation to The Melancholy Collection featuring b-sides from Pennybridge Pioneers onward. The album also features a DVD of a behind-the-scenes look at the previous decade of the band.

In February 2015, Millencolin announced their latest album True Brew would be released in April. The first track "Sense & Sensibility" premiered on YouTube, with a three-part mini documentary about the making of the album being posted leading up to the release. The album was released at different times in different regions; on April 22 in Sweden; April 24 in Australia, Austria, Belgium, Germany, Luxembourg and the Netherlands; April 27 in the rest of Europe and on April 28 in the US.