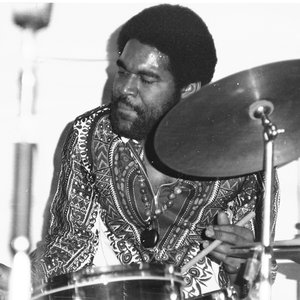 Even when he has not been in the spotlight, drummer Michael Carvin's presence has been felt over a wide range of music. There are the jazz gigs he has logged over the last 30 years, in support of numerous major artists as well as at the helm of his own groups; and there are the many blues and pop performances he has energized, beginning with two years as house drummer for Motown Records in the late 1960s. Even when he's not directly involved, Carvin's influence can be felt through the number of talented drummers who have availed themselves of his insights in the 32 years since he established the Michael Carvin School of Drumming.

Carvin would no doubt be a household name in jazz circles today were he not so single-minded in presenting his music without compromise. As a result, his recordings have been few and far between, and Carvin has continued to fly under many listeners' radar.

Drumming has been at the center of Carvin's life from virtually the moment he was born in Houston, Texas in 1944. His father Henry "Hank" Carvin, one of Houston's top drummers, began schooling his son in drum techniques when Michael was six. By the age of 12, the younger Carvin had played his first professional gig and won the first of five consecutive Texas state championships in drum rudimentals. His career as a touring musician began when he hit the road with Earl Grant in 1964, then was interrupted by his two-year tour of duty with the US Army in Vietnam. After receiving his Honorable Discharge, Carvin settled in Los Angeles, where he served in the Motown studios and on bandstands in support of BB King, Hugh Masekela and others; but the urge to play jazz after working with Bobby Hutcherson and Freddie Hubbard led him to New York in 1973. The move coincided with his first major jazz recordings (with Jackie McLean, including the innovative duo performance Antiquity), and was followed by associations with the likes of Pharoah Sanders, Betty Carter and Dizzy Gillespie.

The Michael Carvin School of Drumming was also founded in 1973, and has given Carvin the opportunity to shape the conceptions of some of the most important younger drummers from all over the world. Now in its 33rd year of operations, the school has a list of distinguished alumni that includes Billy Martin (of Medeski Martin and Wood), Michael Shrieve (of Santana), Ralph Peterson, Jr., Eric McPherson, Nasheet Waits, Allison Miller and Rodney Green among many others. Carvin has also shared his knowledge through ongoing relationships with the New School, the University of Hartford and the University of Kansas/Kansas City.