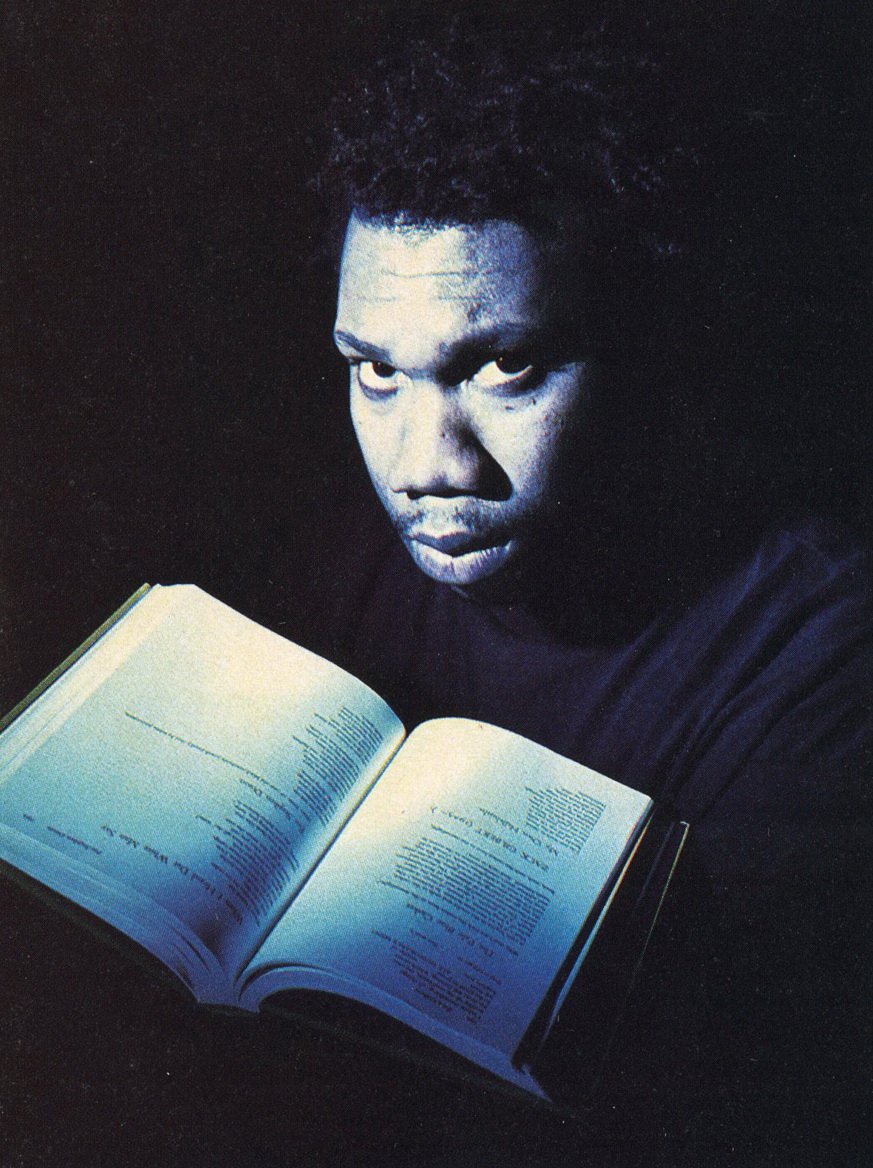 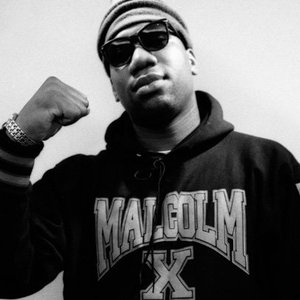 KRS-One (born Lawrence Parker on August 20, 1965 in Park Slope, Brooklyn, New York) is an American hip-hop MC. Over his career he has been known by several pseudonyms, including Kris Parker, KRS One, KRS-ONE (as given at his site), The Blastmaster and The Teacha. KRS-One is an acronym for "Knowledge Reigns Supreme Over Nearly Everybody". KRS-One is a significant figure in the hip hop community and is often referenced in works by other hip hop artists and critics as being the 'essence' of an MC and one of the greatest to ever hold the mic.

KRS-One, originally a member of the hip hop crew Boogie Down Productions, is known for setting the path for both hardcore rap and socially conscious political rap.

Born Lawrence Parker in the Park Slope neighborhood of Brooklyn in 1965, the future KRS-One grew up with his brother Kenny and their single mother in assorted inner city neighborhoods of Brooklyn and the Bronx. According to interviews with The Source Magazine, one fateful day when he was 12 years old, he and his brother Kenny prepared a pan of flavored rice, which was to be the family's dinner for the evening. The hungry pair ate the whole thing, and when their mother came home from work, she kicked them out of the apartment in a fit of anger. They stayed away for two days before younger Kenny decided to go back home, while Lawrence opted not to return. He spent the better part of the next seven years homeless, much of it at local libraries.

In his late teen years, Lawrence Parker fell in with some illegal drug dealers and became a courier. Using a bread delivery truck as a cover, Parker and his partner drove around town to make drops. During one of their trips, a police car pulled up behind them with flashing lights. Parker's partner panicked, and led the cops on a chase for several miles which ended with the truck crashing and the two being apprehended. At the trial, the judge made the commentary that the only reason the police had initially tried to pull them over was because they had private plates on a commercial vehicle, there was no original intent to search for drugs.

Parker, still a minor, claimed he was a ward of the state, and got sent to a juvenile home for his sentencing, after which he was moved to a Covenant House youth homeless shelter. It was there that he met Scott Sterling, a recent college graduate who just started working at the shelter as a social worker. Parker discovered that Sterling moonlighted as a hip hop DJ under the name Scott La Rock. By this time, Parker had earned the nickname "Kris" from the relationship he had developed with local Hare Krishnas that evangelized near the shelter. Heavily influenced by Eastern philosophies, he was also an aspiring rapper, and practiced routines in verbal spars with the other shelter residents.

Parker and Sterling, along with two other fellows, decided to form a rap group together, initially calling themselves "Scott La Rock and the Celebrity Three". That was short-lived, however, as the two peripheral members quit, leaving Parker (now calling himself KRS-One) and Sterling. They then decided to call themselves "Boogie Down Productions". Success is the Word, a 12-inch single release on indie Fresh/Sleeping Bag Records (under the group name "12:41") did not enjoy commercial success. Soon after, the pair approached another NY indie, Rock Candy Productions, for a deal. As it turns out, the entertainment company was allegedly a front for a pornography operation, but Parker and Sterling convinced the boss to front them the money to record an album, under the newly created subsidiary label, B-Boy Records. After a few 12-inch single releases, the Criminal Minded album finally surfaced in 1987.

Criminal Minded featured many dis tracks that attacked other hip hop emcees and tracks about street crime ("wa da da deng wa da da da deng, listen to my nine millimeter go bang"). KRS One and La Rock appeared on the cover of the album holding firearms, a controversial precedent that would be followed by many rap artists in the years to follow. Musically, the album was based around James Brown samples and reggae influences. They also sampled hard-rock band AC/DC on "Dope Beat". During these years, KRS-One was also famously involved in a hip hop battle with MC Shan, of Queensbridge. KRS objected to MC Shan calling Queensbridge the home of hip hop, and attacked him viciously on a seminal battle rap, The Bridge Is Over.

Following the fatal shooting of Scott La Rock in 1987, Boogie Down Productions (BDP) became increasingly political. KRS One was the primary motivation behind the HEAL compilation and the Stop the Violence Movement. KRS One attracted many prominent emcees to appear on the 12-inch single "Self Destruction." As Parker adopted this more conscientious, less violent approach, he stopped calling himself "The Blastmaster" (his battle rap nickname), and instead began calling himself "The Teacha", turning the nickname KRS-ONE into the backronym "Knowledge Reigns Supreme Over Nearly Everyone".

On his first solo album, 1993's Return of the Boombap, KRS worked together with producers DJ Premier (Gang Starr), Showbiz and Kid Capri. The catchy yet very hardcore track "Sound of da Police" is featured on this album. His second album, KRS One featured Channel Live on the track "Free Mumia", a political protest song about Mumia Abu-Jamal, an imprisoned African-American and Black Panther member who a vocal group of activists on the political Left claim is innocent of the crime of which he was convicted. Other prominent guest artists on KRS One included Mad Lion, Busta Rhymes, Das EFX and Fat Joe.

In 1997, Parker surprised many with his release of the album I Got Next. The record included a remix of the single "Step into a World" which featured a sample from the 1970s rock group Blondie by commercial rap icon Puff Daddy. "Heartbeat", featuring Angie Martinez and Redman, was based on the old school classic "Feel the Heartbeat" by the Treacherous Three. These collaborations with notably mainstream artists took many fans and observers of the vehemently anti-mainstream KRS One by surprise. However, in August 1997 KRS One appeared on Tim Westwood's BBC Radio 1 show and vociferously denounced the DJ and the radio station more generally, accusing them of ignoring his style of hip-hop in favour of commercial artists such as Puff Daddy.

In 1999, there were tentative plans to release an album called "Maximum Strength"; a lead single, "5 Boroughs", was released on The Corruptor movie soundtrack. However, KRS apparently decided to abort the album's planned release, just as he had secured a position as a Vice-President of A&R at Reprise Records. KRS moved to southern California, and stayed there for two years, finally ending his relationship with Jive Records with A Retrospective in 2000. The next year, he resigned his position at Reprise and in 2001 The Sneak Attack was released on Koch Records. In 2002, he released a gospel-rap album, Spiritual Minded, surprising many longtime fans. Parker had once denounced Christianity as a "slavemaster religion" which African-Americans should not follow. He founded the Temple of Hiphop, and released a new album, Kristyles, in mid- 2003, which was preceded by KRS-One: The Mixtape. In the summer of 2004 he released Keep Right.

KRS One's latest CD Life, was released in June 2006, and another CD, Adventures in Emceein on Koch Records is slated for later in the year. KRS has also confirmed for his next album of new material, expected to be out in 2007, he will be working with Marley Marl.

In 2004, KRS engendered a controversy when he was quoted in a panel discussion hosted by New Yorker Magazine as saying that Blacks "cheered when 911 happened". The comment drew criticism from many sources, including a pointed barb by the New York Daily News that called Parker an "anarchist" and said that "If Osama bin Laden ever buys a rap album, he'll probably start with a CD by KRS-One."

Parker responded to the furor surrounding his comments with an editorial written for AllHipHop.com. In it, Parker said "I was asked about why hiphop has not engaged the current situation more (meaning 911), my response was 'because it does not affect us, or at least we don’t perceive that it affects us, 911 happened to them'. I went on to say that 'I am speaking for the culture now; I am not speaking my personal opinion.' I continued to say; '911 affected them down the block; the rich, the powerful those that are oppressing us as a culture. Sony, RCA or BMG, Universal, the radio stations, Clear Channel, Viacom with BET and MTV, those are our oppressors those are the people that we're trying to overcome in hiphop everyday, this is a daily thing. We cheered when 911 happened in New York and say that proudly here. Because when we were down at the trade center we were getting hit over the head by cops, told that we can’t come in this building, hustled down to the train station because of the way we dressed and talked, and so on, we were racially profiled. So, when the planes hit the building we were like, 'mmmm, justice'. And just as I began to say 'now of course a lot of our friends and family were lost there as well' but I was interrupted…"