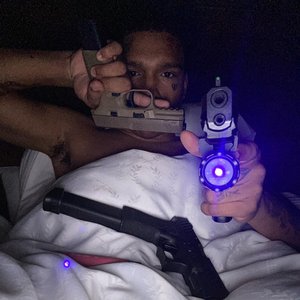 Kevin Gainer (Born Dec. 16, 1997), better known by his stage name, K Suave, is a rapper from Ohio, US. He is a member of Trippie Redd’s 1400/800 crew. His music is a blend of cloud rap and trap and features him melodically rapping and singing over equally melodic instrumentals. His style has commonly been compared to that of Californian rapper D Savage, although the two don’t seem bothered by the comparisons and have collaborated together multiple times, with a collaborative project by the two in the works. K Suave started uploading music to his SoundCloud in early 2014, with his first real song being “Suave Freestyle,” released March 6, 2014. All of his early work has since been deleted, and the oldest song still public on his SoundCloud is “Big body,” released on November 25, 2017. K Suave’s first big break came in early 2019, on March 26, 2019, when the music video for his song “Remix?” was uploaded to the 1400 800 GANG YouTube channel—a channel run by Trippie Redd which features music videos from himself and other 1400/800 members. This quickly became one of Suave’s biggest songs, totaling more than 75,000 views. He appeared on the channel a second time in May of the same year, with the music video for “Black Mirror.”