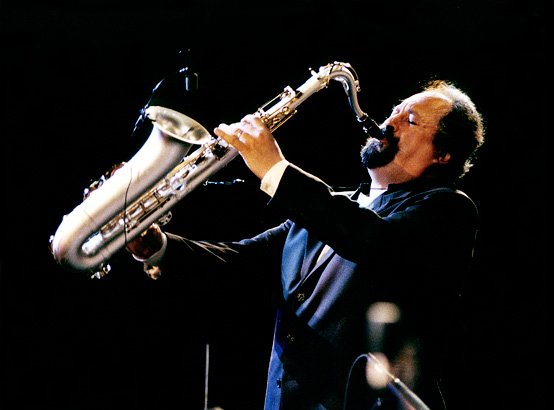 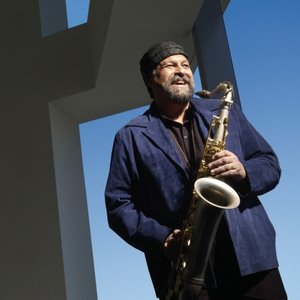 Joseph Salvatore Lovano was born in Cleveland, Ohio on December 29, 1952 and grew up in a very musical household. His dad, Tony, aka Big T, was a barber by day and a big-toned tenor player at night. "Big T," along with his brothers Nick and Joe, other tenor players, and Carl, a bebop trumpeter, made sure Joe's exposure to Jazz and the saxophone were early and constant.

Joe's mom, Josephine, and her sister Rose were serious listeners, as well. His Mom remembers hearing Big T play opposite Stan Getz and Flip Phillips when they were engaged. And Aunt Rose went to hear Jazz at the Philharmonic with Ella Fitzgerald when they came through Cleveland.

Not surprisingly, Joe began playing the alto at five, switching to the tenor a few years later. By the time he got his driver's license at sixteen, Joe Lovano was a member of the Musician's Union, Local 4, and working professionally. He started playing club dates (sometimes subbing for his dad), and Motown cover bands, eventually saving enough money from these gigs to put himself through college.

“My dad was a fantastic saxophone player with a really deep passion for the music. I grew up with his record collection and when I was a teenager, he’d bring me around to rehearsals and jam sessions"

After high school, Joe attended Berklee and his college years were pivotal, a precursor of future collaborations and career opportunities. Joe had been searching for a way to incorporate the fire and spirituality of late-period John Coltrane into more traditional settings and at Berklee, he found it, discovering modal harmony.

“My training was all bebop, and suddenly there were these open forms with deceptive resolutions. That turned me on, the combination of that sound and what I came in there with. I knew what I wanted to work on after that.”

During his Boston years, Joe was part of a vibrant scene, always jamming and meeting new musicians, something he has done his entire life. To finance his education, he continued working club dates and other assorted gigs, including an organ trio engagement he shared with future Nonet member George Garzone down in Boston's combat zone.

His Berklee instructors also played a key role in his development, including Herb Pomeroy, who led the big band, Joe Viola, head of the saxophone department, Andy McGee, a saxophone teacher renown for his advanced improvisation concepts, the inspiring improvisation instructor John LaPorta, and Gary Burton. Joe was in Burton's number one ensemble during the vibist's first semester on the faculty at Berklee.

Twenty years later, Joe Lovano was the recipient of a Distinguished Alumni Award from Berklee and an honorary doctorate in 1998. Berklee also awarded Joe its first endowed chair, The Gary Burton Chair for Jazz Performance in 2001

Post-Berklee, after six weeks on the road backing Tom Jones, Joe returned to Cleveland. With his reputation ascending, he soon got the call from Dr. Lonnie Smith, who was living in Detroit at the time. Joe joined the organist for a series of gigs in the Motor City, as well touring on the Chitlin circuit in 1974.

A six month tenure with Brother Jack McDuff and the Heating System was next. The album Joe recorded with Dr. Lonnie Smith, Afrodesia, started getting a lot of airplay on Jazz radio across the country at that same time, resulting some early name recognition when Joe worked new clubs with McDuff.

“I was used to being in a multicultural world, playing with my dad and his bands, so when I started working the Chitlin circuit with Lonnie, I was pretty much the only white cat in the club. In this music, you're on testing ground all the time, and every time you come through it into the sunshine, you stand taller."

Eventually, the group played New York, the real Jazz proving grounds, for Joe's first Carnegie Hall gig, and in Harlem, at the Club Barron. Playing in New York was so intoxicating that Joe moved to Manhattan. He began sitting in with friends, and ended up working with Chet Baker at Stryker's, and Albert Daley at Folk City, as well as sitting in with Rashied Ali at his club, Ali's Alley. The city was a hotbed of music at the time, with a flourishing loft scene at Sam River's Studio Rivbea, and Ladies Fort, and an exciting lineup at the lower east side club, the Tin Palace

A few months after he relocated to New York, Joe joined Woody Herman's 40th Anniversary tour in 1976, which included “The 40th Anniversary Concert” at Carnegie Hall. For his second Carnegie Hall appearance, Joe shared the stage with Stan Getz on the classic Early Autumn, and was a featured soloist during the celebration, along with Frank Tiberi, Zoot Sims, Al Cohn, Jimmy Guiffre and Flip Phillips. The importance of the event was not lost on Joe's sister, Laura, and his Aunt Rose, who traveled from Cleveland for the gig.

“There's a challenge playing the same music and arrangements every night. You have to find the groove and play the music an enthusiastic spirits to make it come alive. With Woody, there was plenty of solo space to spark new ideas and Woody was very open to that. He encouraged it.”

Joe Lovano's three-year gig with Woody including many firsts, including touring Europe and playing major international festivals as a soloist. The band's nearly non-stop schedule, with only two weeks off every year, included a number of colleges and high schools, where Joe had his first experiences doing workshops and master classes.

"During my time with Woody, I spent every waking moment gigging, composing, studying, listening and trying to figure out where I was going to go from there, musically. It was an eye opening experience, traveling around the world and seeing what was happening."

In 1980, Joe joined the Mel Lewis Orchestra when Bob Brookmeyer served as Musical Director, becoming part of the group's weekly Monday night concert at the Village Vanguard for the next eleven years.

During his tenure with Mel's band, Joe began working gigs as a leader, with Mel as his drummer. Tones, Shapes and Colors, was his first recording as a leader, a live date done at the Jazz Coalition Center in New York.

“Mel was one of the most swinging, generous, beautiful musicians I've ever known. I learned so much from him, including important orchestration lessons and about putting together a flowing set of music, as well as how to communicate within an ensemble."

In addition to his work with Woody and Mel, Joe also played in other large ensembles with Carla Bley, Bob Brookmeyer, Charlie Haden's Liberation Music Orchestra and Gunther Schuller. These experiences served as the catlyst for creating his own musical environments utilzing larger ensembles, including his current Nonet.

In 1981, Joe began playing with Paul Motian, in a Trio that included guitarist Bill Frisell. The group has just celebrated their 20th year together. Working with Motian helped Joe gain further exposure and renown, particularly in Europe.

"Paul Motion has always been one of the most creative improvisers in this music. Playing with his band since '81 has helped give me the confidence to produce the subsequent recordings I've done. Playing in the world of music is what I've learned over and over from Paul."

Paul Motian: "Joe’s provided the magic in my bands for over 20 years, he’s been a tremendous asset. I heard his potential over twenty years ago and we’ve been playing together ever since. He’s been a tremendous help to me, He has a fantastic memory, he remembers all the shit, it’s incredible."

Riding the wave of his European success with Motian, Joe began touring as a leader, just after his first recording, for Soul Note, Tones, Shapes and Colors. He also began collaborating with some of Europe's finest players, at the same time, teaching and doing workshops. During this period, Joe recorded as a leader for several other labels besides Italy's Soul Note records, including Enja, Jazz Club, Label Bleu, and Owl.

Joe's next high profile gig that brought him more national and international attention was with guitarist John Scofield's Quartet, with whom he recorded and toured from 1989 – 1993.

John Scofield: “Joe is very sonically aware – he thinks about the effect different instruments and different personalities will have. He was perfect for what I was doing – his sense of swing and his tone reminded me of the older guys, in a really positive way.”

In 1991, Joe Lovano signed with Blue Note Records and since then, has been leading his own groups, producing nearly twenty-five recordings as a leader and becoming one of the great Jazz artists of our time.

Bruce Lundvall, Blue Note Records: "When I saw Joe Lovano in Peter Erskine’s Band in the late 80’s, I offered to sign him on the spot. The first time I heard Joe Lovano I felt that he was the most creative and hard swinging tenor player I’d heard in years. Joe has emerged as a giant on his instrument and a full fledged giant of jazz."

The secret to Joe Lovano’s success is his fearless ability to challenge and push the conceptual and thematic choices he makes in a quest for new modes of artistic expression, further defining the Jazz idiom.

Joe has long experimented with varying ensembles and formats, including playing unaccompanied saxophone and gongs, as well in duets, trios, quartets, quintets, his Wind Ensemble, Street Band and Nonet, all reflecting his searching and dynamic personality.

As much a composer as player, Joe is constantly seeking new ways to express his muse. Although he's one of the most successful musicians working today, his lifelong regime of practicing, jamming and trying new sounds, endures. In addition to his reed arsenal, Joe has a collection of gongs and a full drum sheet. At home, in his studio, he enjoys these multiple outlets for his creativity. He has played drums on three Blue Note recordings.

Today, Joe and Judi live in the Hudson River Valley area of upstate New York. Although he's busy touring and recording, Joe is an avid swimmer and somehow still finds the time for an occasional 18 holes of golf.

When he's home, Joe Lovano enjoys landscaping, a good match for Judi's love of gardening. Together, when not making music, they explore the forest that surrounds them, stay busy enjoying their extended families in Cleveland and New York.