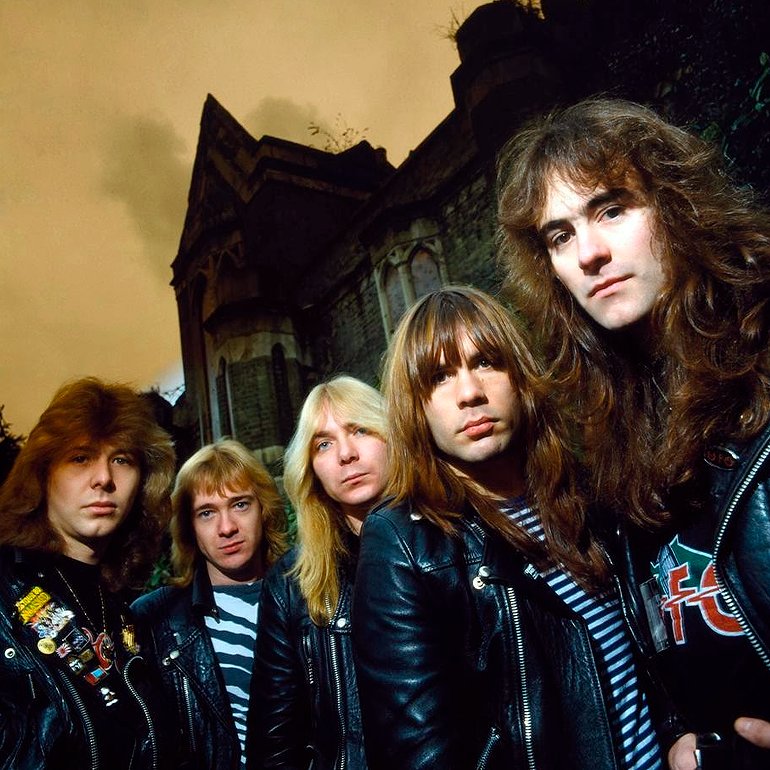 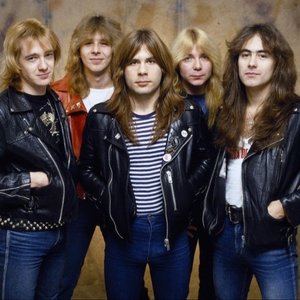 Pioneers of the new wave of British heavy metal, Iron Maiden achieved initial success during the early 1980s. After several line-up changes, the band went on to release a series of UK and US platinum and gold albums, including 1982's The Number of the Beast , 1983's Piece of Mind, 1984's Powerslave, 1985's live release Live After Death, 1986's Somewhere in Time, and 1988's Seventh Son of a Seventh Son. Since the return of lead vocalist Bruce Dickinson and guitarist Adrian Smith in 1999, the band has undergone a resurgence in popularity, with a series of new albums and tours. Their 2010 studio offering, The Final Frontier, peaked at No. 1 in 28 countries and received widespread critical acclaim. The sixteenth studio album, The Book of Souls, was released on 4 September 2015 to similar success, topping the charts in 24 countries. The 17th album, Senjutsu was released in 2021.

Iron Maiden are considered one of the most influential and successful heavy metal bands in history, with The Sunday Times reporting in 2017 that the band have sold over 100 million copies of their albums worldwide, despite little radio or television support. The band won the Ivor Novello Award for international achievement in 2002. As of October 2013, the band have played over 2000 live shows throughout their career. For 40 years the band have been supported by their famous mascot, "Eddie", who has appeared on almost all of their album and single covers, as well as in their live shows.

Iron Maiden were formed on Christmas Day, 25 December 1975 by bassist Steve Harris shortly after he left his previous group, Smiler. Harris attributed the band's name to a film adaptation of The Man in the Iron Mask from the novel by Alexandre Dumas, the title of which reminded him of the iron maiden torture device. After months of rehearsal, Iron Maiden made their debut at St. Nicks Hall in Poplar on 1 May 1976, before taking up a semi-residency at the Cart and Horses Pub in Maryland, Stratford.

The original line-up was short-lived, with vocalist Paul Day being the first casualty as, according to Harris, he lacked "energy or charisma on stage". He was replaced by Dennis Wilcock, a Kiss fan who used make-up and fake blood during live performances. Wilcock's friend, Dave Murray, was invited to join, much to the dismay of the band's guitarists Dave Sullivan and Terry Rance. Their frustration led Harris to temporarily disband Iron Maiden in 1976, though the group reformed soon after with Murray as the sole guitarist. Harris and Murray remain the band's longest-standing members and have performed on all of their releases.

Iron Maiden were ranked No. 24 in VH1's "100 Greatest Artists of Hard Rock", No. 4 in MTV's "Top 10 Greatest Heavy Metal Bands of All Time" and No. 3 in VH1 Classic's "Top 20 Metal Bands". The band also won the Ivor Novello Award for international achievement in 2002 and were inducted into the Hollywood RockWalk whilst touring in the US in 2005.

Iron Maiden frequently use the slogan "Up the Irons" in their disc liner notes, and the phrase can also be seen on several T-shirts officially licensed by the band. It is a paraphrase of "Up the Hammers", the phrase which refers to the London football club, West Ham United, of which founder Steve Harris is a fan.

Iron Maiden's mascot, Eddie, is a perennial fixture in the band's science fiction and horror-influenced album cover art, as well as in live shows. Originally a papier-mâché mask incorporated in their backdrop which would squirt fake blood during their live shows, the name would be transferred to the character featured in the band's debut album cover, created by Derek Riggs. Eddie was painted exclusively by Riggs until 1992, at which point the band began using artwork from numerous other artists as well, including Melvyn Grant. Eddie is also featured in the band's first-person shooter video game, Ed Hunter, as well as their mobile role-playing game, Iron Maiden: Legacy of the Beast, in addition to numerous T-shirts, posters and other band-related merchandise. In 2008, he was awarded the "Icon Award" at the Metal Hammer Golden Gods, while Gibson.com describes him as "the most recognizable metal icon in the world and one of the most versatile too".

Iron Maiden's distinct logo has adorned all of the band's releases since their debut, 1979's The Soundhouse Tapes EP. The typeface originates with Vic Fair's poster design for the 1976 science fiction film, The Man Who Fell to Earth, also used by Gordon Giltrap, although Steve Harris claims that he designed it himself, using his abilities as an architectural draughtsman. The song "Always Look on the Bright Side of Life" (from Monty Python’s Life of Brian) is a staple at their concerts, where the recording is played after the final encore.

2) Iron Maiden (later aka The Bolton Iron Maiden) is a late sixties doom-band. This Iron Maiden was formed in 1964 by Barry Skeels, Steve Drewett, Chris Rose and Alan Hooker as an acoustic band in Basildon, Essex that eventually evolved into a band called Iron Maiden. By 1966, the lineup was Skeels (bass), Drewett (vocals/harmonies), Rose (lead guitar), Tom Loates (rhythm guitar) and Stan Gillem (drums); they played Rolling Stones and blues numbers under the name "Growth". Reduced to a two-piece, Drewett and Skeels played blues under the name of "Stevenson's Blues Department" in pubs and clubs in Essex and London. They supported a number of up and coming bands including Jethro Tull, Fleetwood Mac, The Groundhogs and King Crimson.

In 1968, Drewett and Skeels were joined by Paul Reynolds (drums) and Trevor Thoms (guitar). They released an acetate (God of Darkness/Ballad of Martha Kent) under the then risqué name of BUM. When they signed to the Gemini label in 1970, the name was changed to the less risqué Iron Maiden. They recorded their debut album Maiden Voyage. Reynolds was replaced by Steve Chapman on drums and Iron Maiden released the single Ned Kelly/Falling. This coincided with Mick Jagger's film "Ned Kelly". A planned Australian tour fell through. The Gemini record label also folded (with the loss of the debut album master tapes) and Skeels left Iron Maiden. The band carried on without him for a while, but the debut album was not released until 1998 using duplicate tapes owned by Skeels. This "original" Iron Maiden is often considered by fans as one of the earliest 'true' doom metal bands.

However, soon after the "original" Iron Maiden was re-discovered , their name was officially changed to 'The Bolton Iron Maiden' since the Iron Maiden led by Steve Harris already had the name 'Iron Maiden' trademarked.