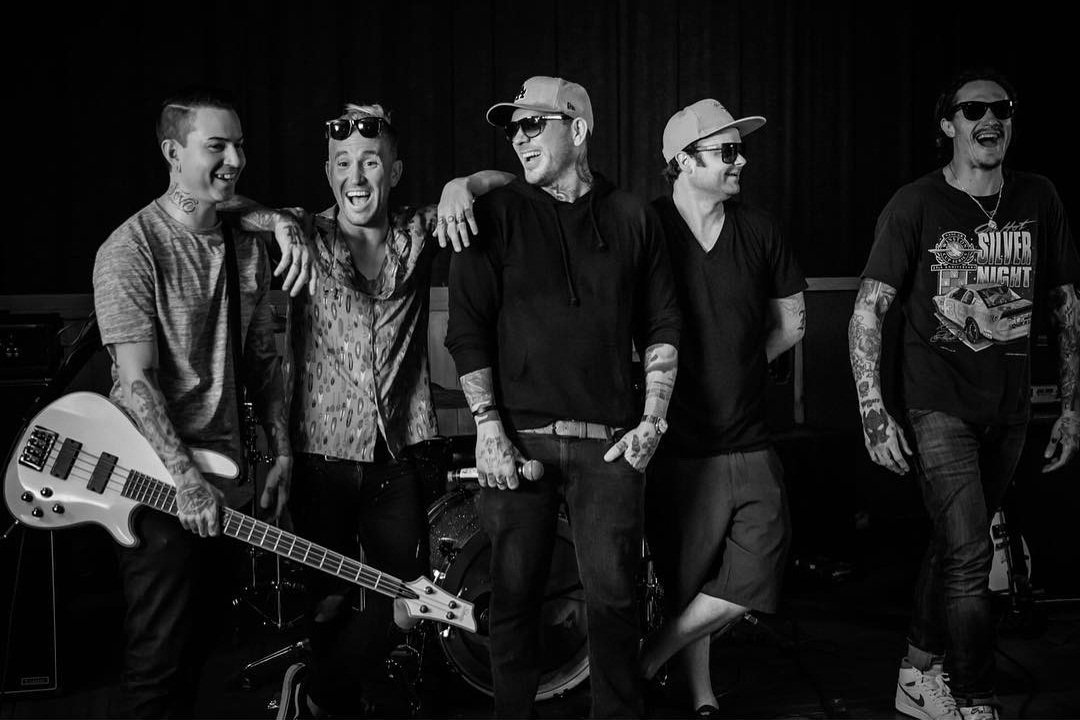 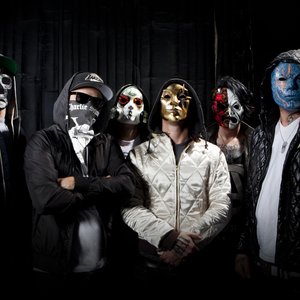 Hollywood Undead is an American rap rock band from Los Angeles, California. The band consists of Charlie Scene, Danny, Funny Man, J-Dog, and Johnny 3 Tears. The band members use pseudonyms and wear masks to display a creative side, not to hide their identities as first assumed. They perform live without the masks on.

The band originated in 2005 from a song titled "The Kids" that Aron Erlichman (Deuce) and Jorel Decker (J-Dog) posted on the band's MySpace profile to positive reviews, leading them to form the group Hollywood Undead with their friends "Shady" Jeff Philips, George Ragan (Johnny 3 Tears), Jordon Terrell (Charlie Scene), Dylan Alvarez (Funny Man), and Matthew St. Claire (Da Kurlzz). In an interview with Shave magazine, J-Dog explained that when forming the band "Whoever was in the room at the time and played an instrument was in the band."

The band only took one year working on their debut album, Swan Songs. The other two years were spent looking for a company that wouldn't try to censor the album. They first signed a record contract with MySpace Records in 2005 but they left the label after the label tried to censor their first album. They then signed a contract with A&M/Octone Records and their first album, Swan Songs was released on September 2, 2008 and reached #22 on the Billboard 200 in its first week of release, selling 21,000 copies; which was later on released in the United Kingdom on May 18, 2009 with two bonus tracks. On June 23, 2009, Hollywood Undead released Swan Songs B-Sides EP through iTunes. After 64 weeks, the album fell off of the Billboard Top 200, but returned four weeks later at #174. Since then, it has gone in and out of the top 200, and is currently charting at #199. On July 28, 2009, it was certified gold by the RIAA.

The band released a CD/DVD set entitled Desperate Measures on November 10, 2009. The set includes a CD of six new songs, three of which being cover songs, as well as a previously unreleased remix of "Everywhere I Go", and six live recordings of songs from Swan Songs, and a DVD of a full live performance by the band.The album debuted at #29 on the Billboard 200, #10 on Top Rock Albums, and #15 on Top Digital Albums.

In early 2010, the band announced that singer, Deuce, had left the band due to creative differences. Ragan and Busek later cited arguments over writing credits, and Deuce not wanting to tour, as reasons for the departure. Decker and Terrell also stated that Deuce wanting to bring his own personal assistant for touring caused a rift between members. The band asked long-time friend, and lead singer of Lorene Drive, Daniel Murillo, to fill in for Deuce's role. Murillo had just advanced past the auditions for season 9 of American Idol, but decided to drop out to join the band.

The band soon began writing material for their second studio album; American Tragedy, in mid-2010, with hopes to release it by the end of the year. The first single, "Hear Me Now", released in December 2010. The single reached a peak of number nine on the Heatseekers Songs chart on Billboard, twenty-four on the Billboard's Rock Songs chart, and number twenty on the Alternative Songs chart. On January 21, they released a new song, "Comin' in Hot" available for a free download, and announced that the official release date for the album would be March 8, 2011. but as of February 22, 2011, it was announced that the album has been pushed back to April 5, 2011. On February 6, 2011, the band released another song titled "Been to Hell", for a free download.

American Tragedy turned out to be more successful than their first album Swan Songs, selling 66,915 in its debut week and peaking at No. 4 on the Billboard 200. It has also peaked at No. 2 on many other charts, while also reaching No. 1 on the Billboard's Top Hard Rock Albums chart. The album was also very successful in other countries, making No. 5 in Canada and No. 43 in the United Kingdom.

The band announced in August 2011 that they would be releasing the remix album titled American Tragedy Redux, that would contain both professional and fan remixes from winners of a remix contest. of songs. It was released on November 21, 2011.

Work on a third studio album began in late November 2011, with the band will beginning to write and record demos while on the "Buried Alive" Tour, and heading to the studio to start recording after the conclusion of the tour. The band aimed to return the sound of their first album, Swan Songs, and that their record label had given them full creative control for the album. He also stated that the band hoped to feature more collaborations on the album.

Artistdirect named the band's upcoming album as one of the most anticipated albums of 2012, alongside other bands such as Linkin Park, Metallica, and Black Sabbath. The band revealed that Griffin Boice and Danny Lohner would return to produce the album. They also revealed that they will be upgrading their masks again, like they did prior to the release of their prior album.

On October 19, they released the track "Dead Bite" from the album for a free download, along with a lyric video to it and announcement for the upcoming album's first single. On October 29, the lead single "We Are" was released along with the album title, Notes from the Underground. On December 10, the band released their official music video for "We Are" on their Vevo account on YouTube. The teaser of the video prior the release of the video credit's Slipknot's Shawn "Clown" Crahan as the director the music video.

The album was released on January 13 and sold over 53,000 copies in its first week, charting at No. 2 on the Billboard 200 and No. 1 on Canada's Top Albums chart, making it highest charting album by the band.

On April 12, 2014, Johnny 3 Tears posted a photo on his Instagram revealing plans for the band to release a new album in the summer. On October 17, Hollywood Undead's Vevo channel leaked the audio video with a song from their new album titled "Day of the Dead," although it was removed shortly afterwards. The song was later made available on iTunes on October 21, 2014, and officially premiered through Revolver Magazine. It was also revealed that the album will also be titled Day of the Dead.

On July 19, 2017 a song titled "California Dreaming" was leaked. The track was released officially on July 24, as the lead single off their upcoming album Five (stylized as V). On August 25, "Whatever It Takes" was uploaded to the band's official YouTube channel followed by the song "Renegade" on September 29. On October 10, founding member Da Kurlzz "amicably" parted ways with the group to "pursue his own interests". The fourth single, "We Own the Night" was released on October 13. A new video for the song "Black Cadillac" featuring B-Real, was released on December 2.

In an interview with DEAD PRESS! whilst the band were at Reading Festival 2018, J-Dog and Danny confirmed that they intend to release a "heavy" song they've recorded called "Bloody Nose". In the same interview, they also shared their plans to record and release their sixth album in early 2019.

On October 30, 2018, it was announced that Hollywood Undead would release a new EP, PSALMS, on November 2, 2018, including two songs previously released in 2018, "Gotta Let Go" and "Another Level", as well as the previously-announced "Bloody Nose".