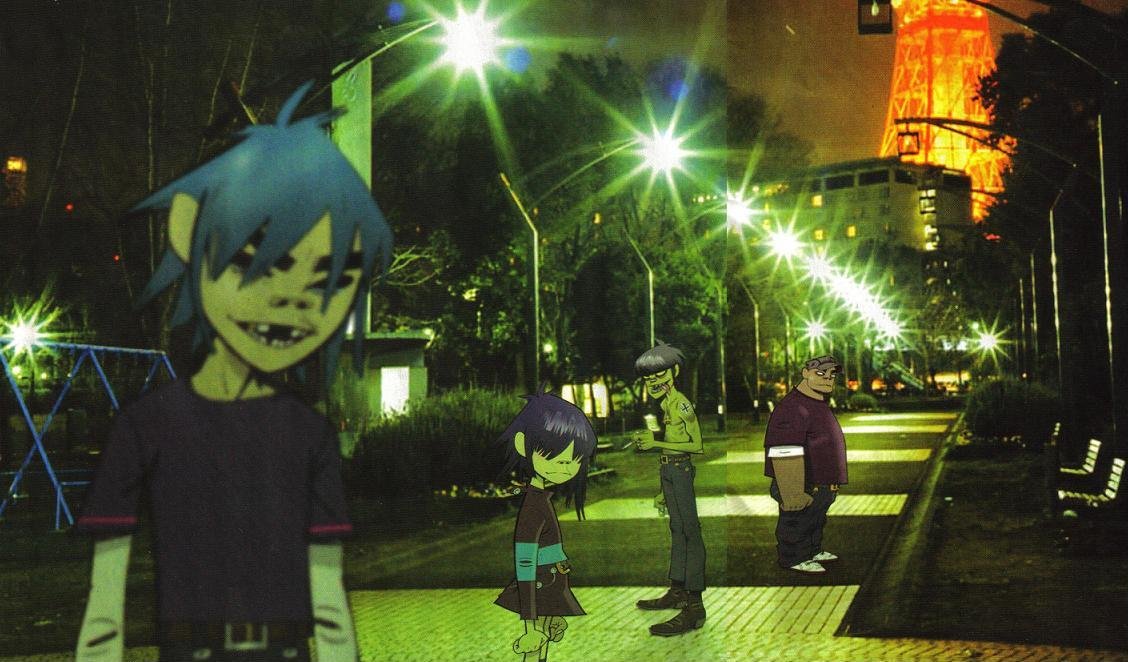 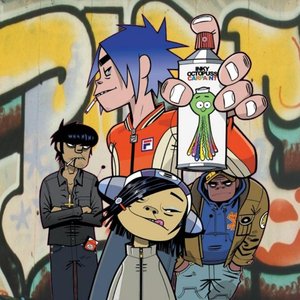 The roots of Gorillaz can be traced back to 1990, when guitarist Graham Coxon asked cartoonist Jamie Hewlett to interview his newly formed band, Blur. Coxon knew of Hewlett's work drawing the Tank Girl comic strip in Deadline magazine. When Jamie first met the band's lead singer Damon Albarn, the two did not hit it off well. Hewlett initially thought Albarn was "arsey" and "a wanker," but the two remained acquainted and would eventually become roommates in 1997, living in London.

Both Jamie and Damon tell the story of Gorillaz came to be about the same way. They were in their flat watching TV, specifically MTV, and came up with the idea of a "virtual band" as commentary on the vapidity of popular music at the turn of the millennium. Previously the best-known '"cartoon bands" were animated versions of The Monkees and The Beatles that kids could watch on Saturday mornings. But Gorillaz (initially called just "Gorilla") was to be an ambitious musical project with eclectic, genre-bending tunes, unique visuals, and a detailed backstory for how the virtual band came to be.

With Gorillaz, Albarn departed from the distinct Britpop of Blur and explored influences including hip hop, electronic music, and world music through an "eccentrically postmodern" approach. The band's 2001 debut album Gorillaz sold over seven million copies worldwide. It was nominated for the Mercury Prize, but the nomination was withdrawn at the band's request. Their second studio album, Demon Days (2005), went six times platinum in the UK and double platinum in the US, and has sold over eight million copies worldwide. The band has won other awards, including one Grammy Award, two MTV Video Music Awards, an NME Award and three MTV Europe Music Awards.

The Gorillaz characters only appear in animated form and are not alter-egos of real people, as is often mistakenly assumed. There is an extensive fictional back-story behind these band members, written by Albarn and Hewlett. Their albums, several of their music videos, and their autobiographical book Rise Of The Ogre all tell the saga. Damon Albarn is the only permanent musical contributor to the band, which is also a collaboration between various musicians. Their style is broad with a large number of alternative influences including rock, hip-hop, and electronica.

They have released five studio albums: Gorillaz (2001), Demon Days (2005), Plastic Beach (2010), The Fall (Also in 2010) and Humanz (2017). Additionally, they have put out two B-side collections, G-Sides (2001) and D-Sides (2007), and a reggae remix of the Gorillaz album entitled Laika Come Home (2002). The band has also released three DVDs: Phase One: Celebrity Takedown, Demon Days: Live at Manchester Opera House, and Phase Two: Slow Boat To Hades. At the end of 2010, Gorillaz released their next album, The Fall, which was recorded during their US 'Escape to Plastic Beach' tour. It is promoted as being the first album made entirely on iPad. The album is streamed on the Gorillaz website. Their sixth studio album The Now Now is set to be released on June 29th, 2018.

The band's first single, Clint Eastwood, was released on 5 March 2001. This single was the first of four from Gorillaz, which was released on 26 March 2001. The other three singles were released over the next year. These were: 19-2000, Rock the House, and Tomorrow Comes Today. The album sold over 7 million copies worldwide and has gone platinum twice in the United Kingdom earning them an entry in the Guinness Book of Records as the Most Successful Virtual Band. It was nominated for the Mercury Prize, but the nomination was later withdrawn at the band's request. Collaborators on the first album included Del tha Funkee Homosapien (often mistaken for a full-time band member), Miho Hatori (formerly of Cibo Matto), Tina Weymouth of Talking Heads.and Ibrahim Ferrer. The album was produced by Dan the Automator of Deltron 3030.

At the end of 2001 the band released another single, 911, which was a collaboration between Gorillaz and rap artists D12, Eminem and Terry Hall. The single would find its way onto the soundtrack to the 2002 action comedy Bad Company.

Their second studio album, Demon Days, was released on 11 May 2005 and included the hit singles Feel Good Inc., DARE, Dirty Harry and Kids With Guns / El Mañana. Demon Days went five times platinum in the UK, double platinum in the United States, and earned five Grammy award nominations for 2006 and won one of them (Best Pop Collaboration with Vocals). Collaborators on this album – produced by Dj Danger Mouse – include De La Soul, Bootie Brown of The Pharcyde, Shaun Ryder of the Happy Mondays, Neneh Cherry, Ike Turner, MF Doom, Roots Manuva, and Martina Topley-Bird, among others. DARE – the first Gorillaz track featuring lead vocals by Noodle – reached #1 in the UK charts.

In late 2007, Albarn and Hewlett began working on Carousel, a new Gorillaz project which eventually evolved into the band's third studio album, Plastic Beach, which was released 9 March 2010. Albarn said, "I'm making this one the most pop record I've ever made in many ways, but with all my experience to try and at least present something that has got depth.” The album features guest performances by Snoop Dogg, Lou Reed, Mos Def, Bobby Womack, Gruff Rhys, Mark E. Smith, Mick Jones, Paul Simonon, Bashy, Kano, De La Soul, Little Dragon, Hypnotic Brass Ensemble, sinfonia ViVA, and The Lebanese National Orchestra for Oriental Arabic Music.

A 3D projection of the group was shown at the 2005 MTV Music Awards and the 2006 Grammys. They also performed at the Brits, in a different format, using screens rather than projections. Gorillaz have performed live in other occasions as well: in 2001 & 2002 they did tours where the musicians played behind screens, and in 2005 & 2006, Gorillaz had five nights in Manchester and New York respectively. This time the screens were behind the musicians, who were visible to the audience only as silhouettes (except for the guest-stars).

Since the band began to achieve mainstream success, there have been rumours of them working on a full-length movie. Some of these have been confirmed, but nothing has gotten beyond planning stages, mainly due to conflicts between the band and studios involved. In 2008, Hewlett said "Ultimately we didn't think that feel we're in a position to make the kind of movie we want to make with Gorillaz at the moment. But I'd still like to make a full, lavishly-animated Gorillaz movie someday."

Albarn and Hewlett created a Pop Opera called Monkey: Journey to the West, which premiered in the summer of 2007 at the Manchester International Festival. A soundtrack album was recorded in the summer as well (initially only digitally available though a CD version was released in 2008). The production went on to show at the Théâtre du Châtelet in Paris in September-October 2007, the Spoleto Festival in Charleston, SC, USA in May 2008, and the Royal Opera House in London in July 2008.

The duo behind the Pop Opera built on ideas from Monkey: Journey to the West to release a short film in the Summer of 2008 which accompanied the United Kingdom's coverage of the BBC Olympic Coverage in Beijing. It featured a basic outline of the main plot elements of the Opera, reworked into a "Journey to the East", with the characters finishing in the Beijing Olympic Stadium.

Gorillaz headlined the Pyramid Stage at Glastonbury 2010, as an immediate replacement for U2, who dropped out of performing at the festival.

At the end of 2010 Gorillaz released their next album The Fall made in the hotel rooms during their US tour. It was, when released, the first album to be recorded entirely on an iPad. The album was made available for free to Gorillaz fan club members for a limited time as a digital download – and hard copies were released to worldwide markets in the following year.

In April 2012, Albarn told The Guardian that he and Hewlett had fallen out and that future Gorillaz projects were "unlikely". However, it was later announced by the duo that they had reconciled their difference – and that Noodle, Russel, Murdoc and 2-D would return with a new album in 2017. Featuring collaborations by artists such as album Grace Jones, Kali Uchis, Popcaan, Vince Staples, Mavis Staples, Peven Everett, Pusha T, Kelela, Jamie Principle, D.R.A.M. and Graham Coxon, Humanz was released to critical acclaim; the album would go on to win Gorillaz the 2018 Brit Award for Best British Group. Gorillaz would also collaborate with Carly Simon, Kilo Kish and Rag'n'Bone Man on the Deluxe edition of Humanz, while Little Simz would feature on the single Garage Palace. Another 2017 release was the single Sleeping Powder – supposedly written and recorded in a day. Meanwhile, a solar energy-themed collaboration with E.ON, released in 2017, would later win Gorillaz a Webby Award.

A new album, The Now Now, would follow in 2018. Written by Albarn whilst touring Humanz – and featuring two collaborations, including the return of Snoop Dogg and Jamie Principle as well as George Benson and Graham Coxon – The Now Now spawned six singles, including Humility, Tranz, and Lake Zürich. Murdoc was unable to enjoy the band's success for the time being as he was undergoing a stint in jail for an undisclosed malefaction; he was replaced on bass for Ace Copular – who most famously played Ace of the Gangreen Gang in the Powerpuff Girls TV series – for the recording of The Now Now; however, Murdoc would later break his way out of prison. Gorillaz saw the year out by securing another Brits nomination for Best British Group as well as winning a second consecutive Webby Award; this time, for the FreeMurdoc chatbot, which provided a way for Gorillaz fans to interact with Murdoc Niccals during his incarceration.