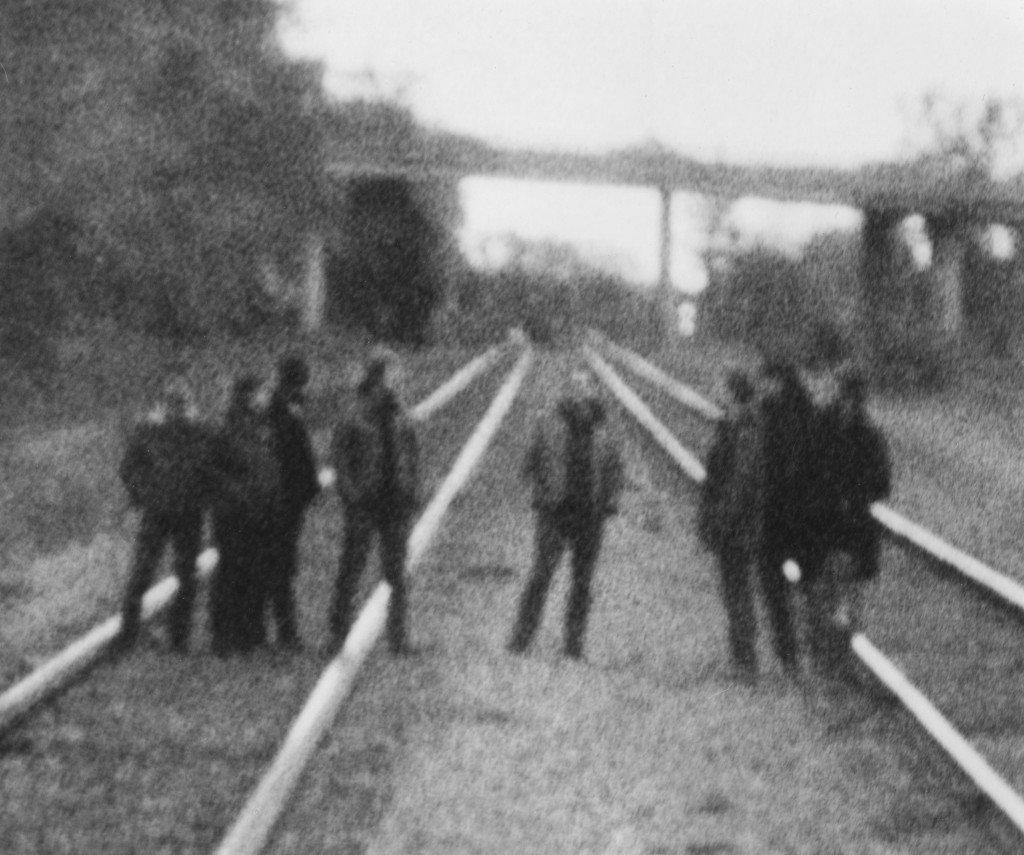 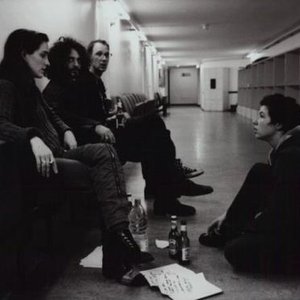 Godspeed You! Black Emperor (formerly punctuated Godspeed You Black Emperor! and abbreviated to GY!BE, GYBE or Godspeed) is a Canadian post-rock band based in Montreal, Quebec.

Formed in 1994 in Montreal, Canada, the band has been highly influential within the post-rock genre. Working with orchestrated arrangements, the nine-piece group created tracks with wide dynamic ranges, a highly evocative use of instrumentation and sounds and uncompromising long form compositions. Their engrossing use of art and visuals in both album packaging and live performances creates an enigmatic aura.

Godspeed You! Black Emperor took their name from a little known 1976 Japanese black-and-white documentary by director Mitsuo Yanagimachi, which follows the exploits of a Japanese biker gang, the Black Emperors.

They are most commonly classified as post-rock, but are just as well recognized outside any established scene and take influences from a range of styles including progressive rock, post-punk, classical music, soundtrack composition and the avant-garde. Each release usually consists of an entire piece divided into movements, mostly between 15 and 25 minutes, sometimes eponymously specified in the liner notes.

GY!BE, although formed around 1994 with three members, had as many as fifteen members but tended to have a core group of nine. Their instrumentation varied with the lineup but the music is mostly based around electric and bass guitars, as well as a string and a percussion section. Other instruments such as the glockenspiel or the French horn have made occasional appearances. Some of their recorded pieces have been accompanied by spoken word samples recorded across North America by the band members, including: an apocalyptic street preacher from Vancouver, BC, Canada, an announcement at a gas station, a group of children talking and singing in French, as well as recordings taken from shortwave radio.

GY!BE members have in the past been reluctant to submit themselves to the traditional self-publicizing interviews, and have openly expressed their distaste for popular culture (and its trappings of high profile record stores, iTunes, etc.) despite the wide availability of their music in easy-access mainstream. This proliferated outsider status has given them a reputation as shadowy, even unfriendly figures, and not a great deal is known about the individual histories of band members. Most of the members have also claimed to be anarchists. However, they became considerably better known after appearing on the cover of British music magazine the NME in 1999.

Efrim Menuck is the most commonly identified participant in the press process, which has resulted in him being commonly mislabeled as the front-man. He has thus repudiated this label, maybe due to the spirit of the group, which discourages the notion of having a leader.

Members of the group have formed a number of side-projects, including A Silver Mt. Zion, Fly Pan Am, Pas Chic Chic and Set Fire to Flames. GY!BE contributed the song "East Hastings" from their debut album to the soundtrack of the UK film 28 Days Later; however, it is not available on the soundtrack album, as the band refused to take part in the "mainstream, corporation-owned music industry", for which they have a great distaste.

In 2004, long-time guitarist Roger-Tellier Craig left the band on amicable terms to devote more time to Fly Pan Am, and more recently, Pas Chic Chic, who released their debut album Au Contraire in the spring of 2008.

The band often played a then-unrecorded song entitled "Albanian" when touring. Efrim stated that when the band reformed they would record it for their next release. Another unreleased song, "Gamelan," was also rumored to be recorded for their next release. The songs, renamed "Mladic" and "We Drift Like Worried Fire" respectively, were released as tracks on their 2012 album 'Allelujah! Don't Bend! Ascend!. However, due to the band's open taping policy, both these songs were already available as high-quality audience recordings.

Godspeed You! Black Emperor announced an indefinite hiatus in the summer of 2003, and had no plans to reconvene in the immediate future. On August 24th of 2006, at an appearance for A Silver Mt. Zion, Efrim responded to a question about Godspeed's hiatus by saying that he " believe that anyone has given up on the group, but it's very complicated."

The group was in one instance misconstrued as being a band of terrorists. After stopping at a local Sinclair gas station in the small town of Ardmore, Oklahoma, for fuel during their 2003 tour of the United States, the station attendant working that day believed the group of Canadians to be terrorists. She quickly passed a note to another customer also getting fuel to call the police. When the local police appeared, the group was held until they could be questioned by the FBI. When no incriminating evidence was found in their various vehicles and background checks were run, the ensemble was released from custody and continued on their way to their next show in St. Louis, Missouri. Interestingly, Efrim Menuck later spoke to the crowd about what happened to them during their appearance in Missouri and said, if they were of any other race than white, they would have been detained much longer than they were originally, hinting heavily toward the suspicion of racism in the police force. The incident was mentioned in Michael Moore's book, "Dude, Where's My Country?".

On 8 February 2008, in an interview with the music website Drowned in Sound, Efrim Menuck stated that Godspeed You! Black Emperor were no more. Efrim claimed that an "existential freakout" relating to the Iraq War was one reason for the extended hiatus but also hinted at several personal issues between members of the band adding; "On a personal level I now find to be inappropriate. There's a complicated back story. I reached a point whereby I was no longer willing to contribute to the steering of the ship; it was like, 'Okay now, someone else point the direction, I love you all, but I need to ride shotgun for a while'. I think that bands do have a short shelf life." In a statement by Efrim's A Silver Mt. Zion publicist, this was later said to be a misquote, adding that Godspeed You! Black Emperor had not officially disbanded as such, but were still very much on indefinite hiatus.

On 9th April 2010, they announced their comeback, starting by curating ATP The Nightmare Before Christmas, with Mike Moya playing with the band again: http://www.1119732.net/. In June 2010, a December tour of the UK was announced, with dates in Glasgow, Manchester, Bristol and London.

The band quietly started selling its fourth album, 'Allelujah! Don't Bend! Ascend!, at shows in 2012. The album was awarded the prestigious Polaris Prize, although the band criticised the extravagant cost of the ceremony during a time of austerity.

The band's fifth album, 'Asunder, Sweet and Other Distress', was released in 2015. It consists of the live piece "Behemoth", which had been performed dating back to 2012, and was split into four continuous movements for the album version. It represents the band's first single-LP release since their début.

"Luciferian Towers", the band's sixth album, was released on September 22, 2017, again to positive reviews. The album's two longer compositions, split up into three tracks each for the digital release, had been debuted live in 2015, while the two shorter ones are a split-up version of a song debuted in 2016. The album was accompanied by a press release featuring demands for "an end to foreign invasions; an end to borders; the total dismantling of the prison-industrial complex; healthcare, housing, food and water acknowledged as an inalienable human right; the expert fuckers who broke this world never get to speak again" and denunciations of environmental degradation and exploitative practices by landlords, capital, police, and the state; it also features overtly political song titles such as "Bosses Hang" and "Anthem for No State". Musically, the album features perhaps Godspeed's most optimistic music to date; its first three songs are primarily composed around major-key melodies.

The band released its seventh album, G_d's Pee AT STATE'S END!, on April 2, 2021. It was written on tour and then recorded, socially distanced, during the 2020 COVID-19 lockdowns. They stated, "this record is about all of us waiting for the end", but also, "this record is about all of us waiting for the beginning." As with "Luciferian Towers", the band issued a list of demands along with the album: "empty the prisons, take power from the police and give it to the neighbourhoods that they terrorise, end the forever wars and all other forms of imperialism, tax the rich until they are impoverished." Like the band's other work, the album has received positive reviews. The band also indicated that they will return to touring once it is safe to do so.

On February 4, 2022, the band's long-coveted 1994 demo tape All Lights Fucked on the Hairy Amp Drooling was finally posted to the Internet. Stylistically, it is highly atypical of the band's later work; most of the songs feature only Menuck, with occasional bass from Pezzente and occasional guest performers. The tracks are also far shorter, and many feature vocals. The band officially re-released the demo through their Bandcamp on February 14, 2022, as part of a charity fundraiser.