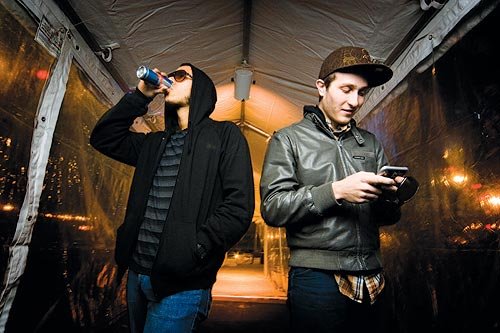 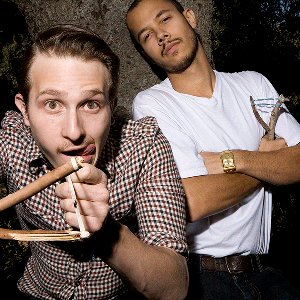 Flosstradamus is a Chicago DJ Duo consisting of J2K (Josh Young) and DJ Autobot (Curt Cameruci). They gained popularity building mashups out of well known songs, while maintaining a consistent dance flow, making them dance hall masters and quick local favorites. But they don't start nor do they stop with the mashup. They are cunning tricksters of the booty shake, playing whatever will make people get off the seat and step to the beat.

After frothing local enthusiasm like a Starbucks barrista, they started touring and have played Pitchfork, Rothbury, SXSW, and even the hallowed recesses of Philly's B clubs.

After making URB's "Next 100" list they took off like one of those 2-liter bottle rockets, building a larger audience and booking more shows. About this time, J2K's sister, Kid Sister, started making it big (this was just before Kanye spit a few lines on one of her tracks, making her well known).

They've played with Chromeo, Cool Kids, and A-Trak as well as a lot of other, lesser-well-knowns but equally talented folk.

After mixing for years, in 2008 Big Bills came out, marking the first home-brewed production for the Floss. The polished and happy-beated dance song features Caroline Polachek and has fans repeating it like a romantic repeats a Jane Austen movie (ie. till your roommate deletes the MP3).

Check out Big Bills at Green Label Sound and MySpace for tour info.