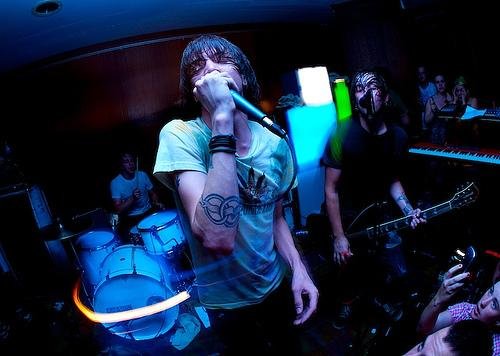 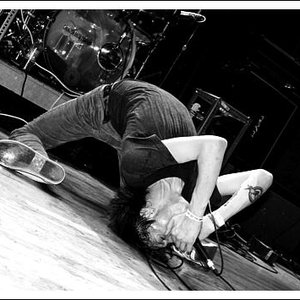 Fear Before The March Of Flames

Fear Before the March of Flames (now known as Fear Before) is an experimental post-hardcore band from Aurora, Colorado, formed in 2002. Their initial sound carried out on their first two records was closer to a melding of screamo, hardcore, and metalcore, drawing influence from the likes of Converge, The Blood Brothers, and Botch. Some even considered them during this time period to be mathcore because of their technical riffs and song structure.

They released their debut album, Odd How People Shake, in 2003 on Rise Records, and after gaining some notoriety, were signed to Equal Vision Records, who re-released their debut in the January 2004. Their debut was primarily in the vein of post-hardcore, featuring a mix of screamed vocals on the part of David Marion and clean singing provided by Adam Fisher. The instrumental work on Odd How People Shake is best described as typical of that of most melodic metalcore artists of the day, and it is rumoured that every song on the album is based on a movie ("Sarah Goldfarb, Where are Your Manners?", for example, is supposedly about Requiem for a Dream, while on their sophomore album, Art Damage, "The Story of the Curious Oysters" has more to do with the Disney movie, Alice in Wonderland). It is interesting and worth noting that the band's cover art on all three of their albums feature skyscrapers.

Their sophomore album, Art Damage, was released on Equal Vision Records in September 2004, and was a marked change in direction for the band. Art Damage as an album was much heavier and darker than their debut; the band left behind the relative simplicity and, arguably, tiredness of the instrumental work of their debut in favor of the abrasiveness characterizing bands such as Converge and Every Time I Die. In addition, virtually all of the vocals are screamed, with the exception of an odd chorus or verse.

The critical consensus seems to favor their new direction, and in concert, the band plays few if any songs from their debut. On their website, they explicitly state that they will not play one song in particular from their debut, "On the Brightside, She Could Choke;" interestingly enough, this song also has the most prominent elements of emo of all the songs in their catalogue, which could be one of the reasons they have grown so adverse to playing it.

Their new album, The Always Open Mouth, was released on Tuesday, September 19, 2006. This album marks a considerably different sound from previous recordings. This album contains a much more experimental side, such as more emphasis on antiphony between the lead singer and guitarist and a considerable lesser amount of screaming. It features layered guitar chords (a second guitarist was added to the band before the recording of this album), and many electronic sounds used with heavily-distorted or otherwise-effected guitars and synthesizers, or sequencers and drum machines, giving it a more industrial feel. As a result, it is not as hard or fast as their previous two albums, but instead, is more experimental and well-crafted.

With newly added members and a new approach at performing music, they set off on numerous tours mid-2006 to promote their latest CD The Always Open Mouth, touring with bands such as Thursday, The Number Twelve Looks Like You, HeavyHeavyLowLow, The Jonbenet, and the Radio Rebellion Tour with bands The Fully Down, The Confession, blessthefall, Misery Signals, Between the Buried and Me, and headliners of the tour Norma Jean. During a show on November 4th in San Diego, California, bassist Mike Madruga accidentally hit singer Dave Marion on the side of his face with the headstock of his bass, knocking him unconscious on stage. When he awoke, there was a hole that went all the way through his cheek, and although the band continued to finish the set, he had to be rushed to the hospital to be treated for the injury, and because of this, the band missed the following 3 days of the tour, but Dave is now fine and has finished the rest of the Radio Rebellion Tour.

On 2008]-09-09, Fear Before the March of Flames officially shortened their name to Fear Before.

Top Tracks
1) Taking Cassandra to the End of the World Party
2) Fashion Tips Baby
3) Should Have Stayed in the Shallows
4) Mouth
5) Drowning The Old Hag
6) Absolute Future
7) On The Brightside, She Could Choke
8) Ten Seconds In Los Angeles
9) The 20th Century Was Entirely Mine
10) My (Fucking) Deer Hunter
11) Dog Sized Bird
12) The Waiting Makes Me Curious
13) Lycanthropy
14) ...As a Result of Signals Being Crossed
15) High As A Horse
16) Girl's Got A Face Like Murder
17) A Gift For Fiction
18) Complete and Utter Confusion...
19) Absolute Past
20) A Brief Tutorial In Bacchanalia
21) Given To Dreams
22) The Lisbon Girls, Oh The Lisbon Girls
23) Consequences David, You'll Meet Your Fate in the Styx
24) Absolutely Fabulous and Me
25) Sarah Goldfarb, Where Are Your Manners