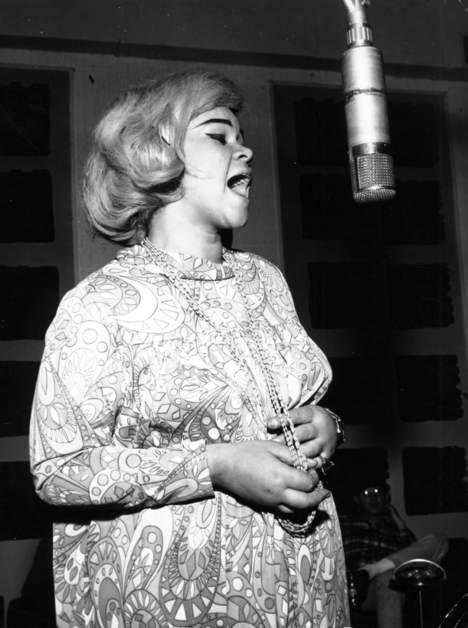 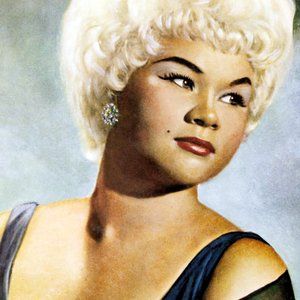 James was born Jamesetta Hawkins in Los Angeles, California, on 25th January 1938, to an unmarried fourteen-year-old mother, Dorothy Hawkins. According to Etta, her mother claimed that her father was the white Rudolph "Minnesota Fats" Wanderone, and that they received financial support from him on the condition that they keep his paternity a secret. This seems unlikely, though it has not been definitively disproved. Etta was born in Los Angeles in 1938. At the time, Wanderone was known to be managing a pool hall in Washington, D.C. and had not yet become known to be the cross-country traveller he later became.

She received her first professional vocal training at five years old from James Earle Hines, musical director of the Echoes of Eden choir at St Paul Baptist Church in Los Angeles. Her family moved to San Francisco in 1950, and she teamed up with two other girls to form a doo-wop singing group. When the girls were fourteen, band leader Johnny Otis had them audition. They sang an answer to Hank Ballard's "Work with Me, Annie" called "Roll Wwth Me Henry". Otis particularly liked the song, and against her mother's wishes, James and the trio went to Los Angeles to record the song in 1954. The song was recorded on the label Modern Records. By this time, the trio renamed the song "The Wallflower (Dance with Me, Henry)" and released it in 1955. James named her vocal group The Peaches. Richard Berry, a Los Angeles doo-wop luminary, is featured on some of their records.

"The Wallflower" reached number two on the rhythm and blues charts in February 1955, but was undercut in the wider market by a rushed-out cover version by Georgia Gibbs on Mercury Records; in fact, the very first time Gibbs was recorded in studio, they used the first take recorded and it became number one on the top 100 songs nationally. The song's royalties were divided between Hank Ballard, Etta James, and Johnny Otis, and its huge success attracted the attention of the R&B world, resulting in James going on tour with Little Richard. On the tour, though, according to James, she witnessed and experienced situations to which minors are not usually privy, and she allegedly acquired a drug habit.

Soon after the success of "Wallflower", The Peaches and James parted company, but this did not halt her career. Shecontinued to record and release albums throughout much of the decade, and enjoyed more success. Her follow-up, "Good Rockin' Daddy", became another fifties hit. Other songs however, such as "Tough Lover" and "W-O-M-A-N" failed to gain any significant success. James toured with Johnny "Guitar" Watson and Otis Redding in the fifties, and has cited Watson as the most significant influence on her style..

In 1960, James signed a recording contract with Chess Records. She went on to have the biggest success of her career from this label, recording her biggest and most memorable hits. Chess went into high gear with James, releasing many duets with her then boyfriend, the married Harvey Fuqua, who was the lead singer of the Moonglows. One of her duets with Fuqua, "If I Can't Have You", became a hit on the R&B charts in 1960. As a solo artist however, she had more enduring success. One of her first singles released by Chess in 1960 was called "All I Could Do Was Cry"; this blues number became a big hit on the R&B charts in 1960. Leonard Chess, one of the founders of Chess Records, helped James along the way. He saw the potential for her to go in a more pop-oriented direction, and she started recording more pop tunes for the label.

The year 1961 became a year of great change for James. In 1961 came the release of one of her first pop-oriented tunes called "At Last". The song became a big hit in 1961, reaching number two on the R&B charts. The song even went as far as twenty-two on the pop charts that year. It became her signature song. Other songs, such as "Trust in Me", also became hits, and the 1962 tune "Something's Got a Hold On Me" showed more of James' gospel side, a genre she had sung since childhood.

She had other big hits in the 1960s, but mainly on the R&B charts: the song "Pushover" in 1963 and "Stop the Wedding", "Fool That I Am", and "Don't Cry Baby", were hits for her between 1961 and 1963. Her 1963 album Etta James Rocks the House, recorded at Nashville's "New Era" club, also gave her career a boost. James then became one of the most successful R&B artists of the 1960s, having many more top ten and top twenty hit singles. Performing in Memphis, Tennessee helped make her into a blues icon.

In 1967, James released her next hit single, "Tell Mama", and it became a top ten hit on the R&B charts. After a dry period of no hits for almost four years, the song once more made James a household name. The follow-up, "Security", was also a success, and proved that James had staying power on the charts again. Whilst less success came for James after this hit, she was still on the charts regularly and, despite the death of Leonard Chess, stayed with the Chess label into 1975. Towards the end of the Chess years though, she went into more rock-based songs. She recorded for many other labels, and continued to release albums, such as 1978's Deep In the Night on Atlantic Records.

Despite a dry period during the early to mid 1980s, James got back on track and began to record music again. She received accolades for her 1981 rendition of Randy Newman's "God's Song". Her 1988 album Seven Year Itch proved this comeback capability; the album showed more of her soul side. In 1989, she recorded the song "Avenue D" with David A. Stewart of Eurythmics. The song was featured on the soundtrack to the Robert Wise film Rooftops. She also performed with the Grateful Dead for two shows in 1982. In the 1990s she continued to record and perform. Her albums widely varied in styles and genres. Her 1992 album, The Right Time, was another soul album that was released by Elektra Records. She also began to record more jazz, which became the style for many of her 1990s albums.

Drug-related and romantic problems interfered with her career, but James managed to maintain a career throughout the latter half of the twentieth century. Later in life, she struggled with obesity, experiencing mobility and knee problems. In 2003, she underwent gastric bypass surgery.

In 2011, a vocal sample from Etta's "Something's Got a Hold on Me" was used in "Levels" by Avicii. "Levels" became a monster EDM hit, making Etta's "sometimes I get a good feeling" one of the most recognizable samples in 21st century music.