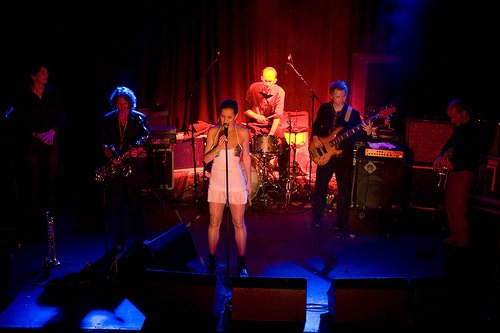 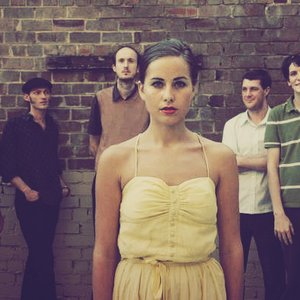 Formed late in 2008, it didn’t take long for six piece band DOJO CUTS to become Australia’s hottest heavy funk unit. The band combine crisp, tight, funky instrumentals with some killer vocals by the delectable Roxie Ray that are in equal parts power and grit. Inspired by the sounds of the 60s and 70s, combined with elements of modern funk, Dojo Cuts create timeless, classic feel-good music. Following in the footsteps of Aussie funk groups such as Cookin’ On 3 Burners, The Bamboos, Deep Street Soul and Kylie Auldist, Dojo Cuts seem to be stirring up a storm in the Southern hemisphere and beyond, making them the most likely candidates to become the brightest stars of this fast growing scene.

With heavy breaks coming from the inexorably-in-sync rhythm section, accompanied by a harmonious horn section and the awesome vocals of the one and only Roxie Ray, it's easy to see why this band never fails to get audiences strutting and squawking at their explosive live shows. Their self-titled debut album captures all that energy and lets it unfold throughout the 9 tracks it contains, from the cover of Stevie Wonder’s “Uptight”, to that of Marie ‘Queenie’ Lyons’ “See and Don’t See”, originally-penned cuts such as “Say What You Mean” and “Something Going On”, as well as single “The 1-2-3’s”, which secured them massive airplay on radios and dancefloors worldwide, gaining support by DJs such as Craig Charles, Nik Weston, Rob Luis, Lanu and Diesler.

Legendary NYC producer Gabriel Roth (The Dap-Kings / Amy Winehouse / Daptone Records) and Neal Sugarman (The Dap-Kings / Sugarman 3 / Daptone Records) have already declared themselves fans of the band, and Roth even wrote the liner notes of the debut album, so you know this is a group worth keeping an eye on! Other projects include a bunch of collaborations for vocalist Roxie Ray, who is featured on tracks by Milano Jazz-Dance Combo, Lack Of Afro, Ray Lugo's L.E.S Express, as well as the debut album by raw funk band from Cornwall The Underbelly, and also check out new afro-funk band The Liberators, which is made up of a few members from Dojo, out now with their debut self-titled. As for Dojo Cuts, the future sees them releasing a much-awaited second album in 2012, so stay tuned!

"A killer funk group – with one hell of a soulful singer! Roxie Ray's a newcomer to our ears, but she belts it out here like a classic funk diva from way back – working perfectly with the tight acoustic grooves of Dojo Cuts, who themselves have an equally classic groove!” - Dusty Groove America