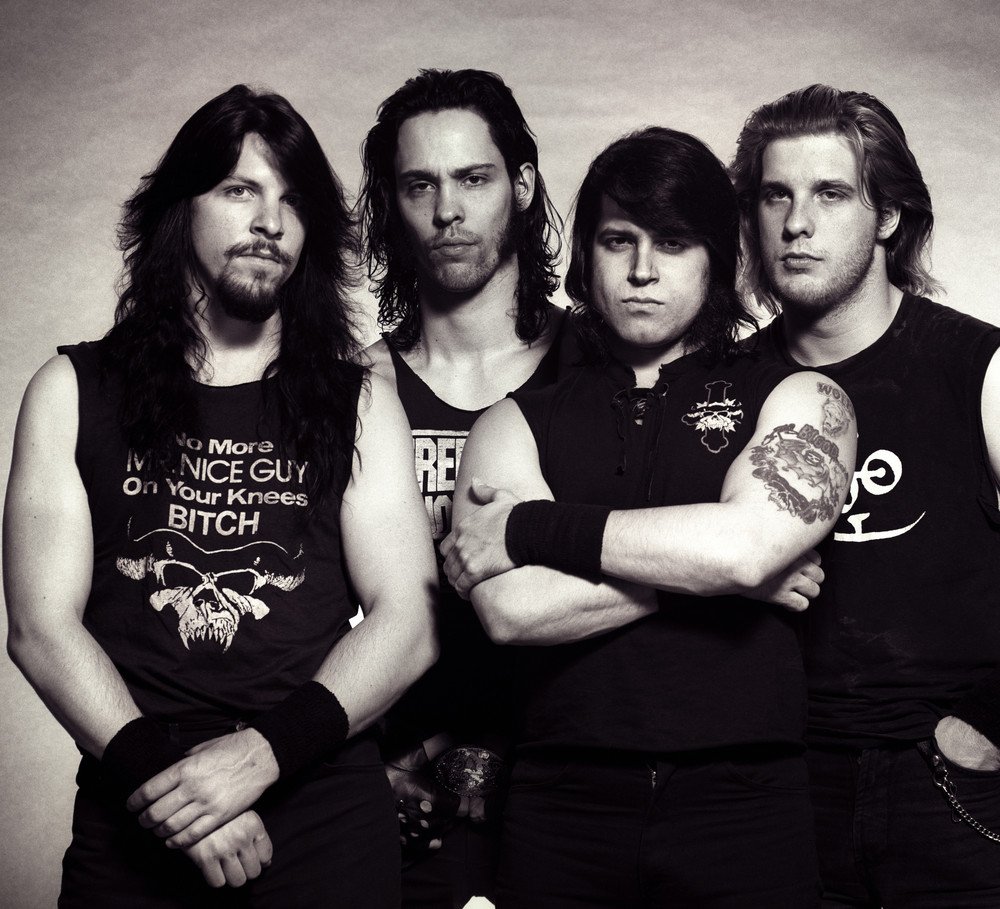 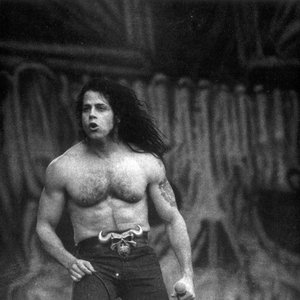 Danzig is a heavy metal band from the United States, formed in 1987, in Lodi, New Jersey. The band serves as a musical outlet for singer/composer Glenn Danzig, and their music fuses dark lyrics and imagery with blues influenced music. Danzig can be seen as the third stage in Glenn Danzig's musical career, preceded by the punk band The Misfits and the deathrock band Samhain.

On July 14, 1986, Samhain performed what was to be their final show, at The Ritz in New York City. In attendance was Rick Rubin, who was scouting for potential bands to sign to his record label, Def Jam. Upon viewing Samhain's performance, Rubin was impressed with Glenn Danzig's powerful stage persona and vocal abilities. He approached him after the show and propositioned him. At first, he wished only to sign Danzig, with the intent of making him the vocalist for a heavy metal supergroup that Rubin envisioned. However, Danzig refused to sign to Rubin's label without Samhain's bassist, Eerie Von, whom Glenn had become great friends with. Rubin agreed to sign Samhain, and he began making suggestions for the new direction he felt the band should take. Rubin felt the music should be stripped down, and that Glenn's vocal talents should become the focal point for the band.

In 1987, the band evolved into a solid heavy metal act, with the addition of John Christ on guitar and Chuck Biscuits (ex-Black Flag) on drums. In order to avoid a potential lawsuit over royalties from past Samhain members, and also due to the change in musical direction, Glenn decided to change the name of the band to Danzig.

Having formed and begun recording as Danzig the previous year, in 1988 the band released its first album, simply titled Danzig, on Rick Rubin's newly formed label Def American (later renamed to American Recordings). The album featured polished production by Rick Rubin, with heavy, blues-based guitar riffs and Glenn's powerful and melodic vocal performance–a harsh contrast to the gritty, raw sounding production of Samhain's albums. The album was released to lukewarm reviews, but is now considered by many heavy metal publications to be among the best hard rock albums of all time.

In 1990, Danzig released their sophomore album, Danzig II: Lucifuge, the band's most diverse LP. Here the music continued to blur the lines between classic blues and hard rock, and it featured some of the best vocal performances of Glenn's career.

By 1992, Rick Rubin's involvement with the band had waned and Glenn Danzig took credit for producing the third album, Danzig III: How the Gods Kill, which many fans see as the pinnacle of the Danzig catalog. The album continued the unique sound established with the first two, but the music and lyrics had become darker, containing gothic overtones. During this time, Glenn became fond of singing in a throaty bellow, which he says was inspired by classic blues singers. Fans jokingly named this singing style Glenn's "cookie monster" voice, due to its resemblance to the gruff voice of the Cookie Monster from Sesame Street. This vocal style can be heard prominently on the Thrall: Demonsweatlive EP, which contained several live tracks from the band's 1992 Halloween show, as well as three new studio tracks. The "Thrall" EP contained a surprise hit for the band, when the live version of Mother (originally recorded on the first Danzig album) became popular on hard rock radio stations. A new version of the "Mother" music video was created using live footage, and the video became an instant hit on MTV, pushing Danzig into the mainstream.

With Danzig in the mainstream spotlight, controversy surrounding the nature of Glenn Danzig's lyrics and imagery increased. Conservative Christian groups accused Danzig of being a Satanist with obvious intentions to persuade impressionable youths over to the "left hand path". Danzig shrugged off the controversy as a humorous annoyance and often made light of it. Glenn has repeatedly denied accusations of being a Satanist, saying that he is fascinated by the nature of evil and merely finds Satan to be an interesting figure in Christian Theology.

In October 1993, the band entered the studio to record their fourth studio album. Glenn received pressure from the record executives to write songs in the same vein as "Mother," but he was determined not to backtrack his musical progression. Rick Rubin had become increasingly distant from the band and had little involvement in the recording of the fourth album. In 1994, Danzig 4P was released. The album was darker, much more atmospheric than the band's previous releases, and more experimental as well. While it sold well, it did not contain a hit on par with the "Mother" single. The album's second single, Cantspeak, was also a staple in MTV's rotation (even making the Buzz Bin), and it charted on the rock charts, although (unlike "Mother") it failed to appear on the Hot 100. "Cantspeak" is the band's only single other than "Mother" to chart on Billboard, thus making the band a two-hit wonder of the mainstream scene. Danzig's relationship with Rick Rubin deteriorated and Danzig was dropped from the label.

Around this time, the band's lineup began to dissolve as well. First, Chuck Biscuits left due to royalty disagreements with Glenn, leaving the band part way through the Danzig 4 tour. He was quickly replaced by Joey Castillo. In 1995, John Christ left after learning that Glenn was actively seeking a replacement guitarist. At the same time, Eerie Von left of his own accord, ending what most fans consider the classic era of the band. Glenn Danzig has said that it was always his intention to have a revolving line-up, but it just so happened that the original lineup remained intact for much longer than he had expected. Since the end of the classic era, each Danzig album has featured a different band lineup.

In 1996, Danzig 5: Blackacidevil (a play on the phrase "Black as a Devil"), was released, surprising many with its heavy emphasis on industrial rock. Glenn has stated that Rick Rubin had been keeping him from experimenting with electronics on earlier Danzig releases, and so with the fifth album, Glenn was eager to indulge in industrial sounds unimpeded. The album was mostly a solo effort by Glenn, although Jerry Cantrell of Alice in Chains played lead guitar on three of the album's tracks, while drum duties were handled by Joey Castillo, the sole member still in the band from the 4p Tour (Joey would go on to record on two more Danzig albums, making him the longest standing member outside of the classic lineup). Most Danzig fans were disappointed with the album, presumably due to the drastic departure from the sound of the first four releases. Additionally, many fans viewed Glenn's vocals as the highlight of the band–and throughout most of Blackacidevil, Glenn's voice is buried under layers of effects. Other fans embraced the album, and saw it as Glenn returning to the more experimental style of Samhain. The album is the most controversial of the bands back catalogue and the music therein is often referred to as being "Techno Danzig".

The next couple years saw Danzig tied up in a legal battle with Rick Rubin over the rights to the unreleased material the band produced under American Recordings. After winning back the rights, Danzig entered the studio to record the sixth full length album. In November 1999, Danzig 6:66 Satan's Child was released, with mixed reactions from fans and critics. It featured dark and heavy doom metal accented by mild electronics, with Danzig singing in an uncharacteristic harsh whispery tone for most of the album. Some critics and fans have described the sound the album as being similiar to nu metal, a genre of heavy music that Glenn Danzig is well known to detest. This comparison is often linked to the fact that much of the album was produced by Jay Gordon and Amir Derakh of the electropop/nu metal band, Orgy. One of the tracks on Danzig 6:66 Satan's Child is Thirteen, a song Danzig wrote for Johnny Cash in 1994.

By 2000, Danzig's line up had stabilized with the addition of guitarist Todd Youth and bassist Howie Pyro, both veterans of the New York City punk scene. In 2002, this line up released the album Danzig 777: I Luciferi. The album was devoid of electronics and contained some of the darkest and heaviest songs of Danzig's career. Some of the later tracks on I Luciferi harkened back to the classic sound of the band, and many fans heralded it as a return to form, although some were disappointed with the album's production quality.

In 2004, Danzig released their eighth studio album, Circle of Snakes, which, along with the previous album, many fans view as Glenn's best work since the classic era of the band. On Circle of Snakes the line up was again re-written and now featured Tommy Victor from Prong on guitar. The sound evolved again, and here Tommy Victor’s guitar seemed to be the dominant force on each song. Some critics had a problem with the mixing of the album, citing that the vocals and drums often seemed to be buried under the multiple layered guitar tracks.

Danzig then set out headlining the Blackest of the Black tour across the United States. "The Blackest of the Black" was a package set up by Glenn Danzig as a way to help some of his favorite dark underground bands gain more exposure, while providing fans of heavy music an alternative to Ozzfest, which Glenn felt had become oversaturated with commercialized nu metal acts. During the 2005 Blackest of the Black dates, halfway through the Danzig set, the band was joined by Doyle Wolfgang Von Frankenstein, the Misfits' most iconic guitarist, for a set of classic Misfits songs. These shows were the first time Glenn had played with Doyle in over twenty years, and many of these shows were sold out. Though the album has been out for almost 3 years, the Blackest of the Black tour still seems to be going on. Danzig has ended the bonus sets with Doyle, but has selected new bands to play alongside him from all around the world, including Asesino from Mexico, Belphegor from Austria, The Haunted from Sweden, and Lacuna Coil from Italy.

Glenn Danzig says he is ready to take a break from touring, perhaps permanently, to work on other projects and produce other bands. Currently, Glenn is working on his feature film Ge Rouge". He has also been putting the finishing touches on his second solo album Black Aria II (follow-up to Black Aria). He has stated in several recent interviews that after he finishes Ge Rouge, he will begin putting together The Lost Tracks of Danzig, a double CD containing around thirty unreleased songs that span the entire Danzig catalog. Glenn has also stated that he and Jerry Cantrell have been discussing the possibility of teaming up to write and record an album of dark blues songs.