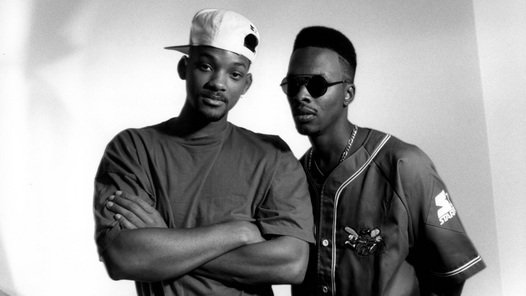 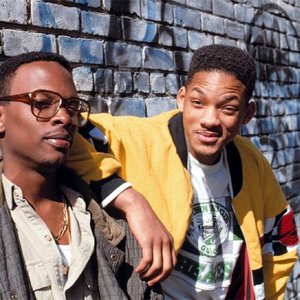 DJ Jazzy Jeff & The Fresh Prince was a 1980s and 1990s rap duo. The vocalist of this duo, Will Smith, met Jeff Townes while trying to make a name for himself in West Philadelphia’s local party/rap scene. After joining forces, the team became local celebrities. Philadelphia-based Pop Art Records released their first single, Girls Ain’t Nothing but Trouble, in late 1985, a tale of misadventures with the opposite sex. The song sampled the theme of I Dream of Jeannie. Smith became known for lighthearted, storytelling raps and capable, through curse-free, 'battle' rhymes. Townes was known for his turntable acrobatics, and is credited by many as inventing a style of scratching called "transforming".

Based off this success, the duo were brought to the attention of Jive Records and Russell Simmons’. Their first album, Rock the House, debuted on Jive in the summer of 1987. The band found themselves on their first major tour with Run DMC, Public Enemy, and others, that same year. The album sold about 300,000 units. Their 1988 follow-up hit, He's the DJ, I'm the Rapper made them multi-platinum stars. Mostly recorded in the UK, the album was rap musics’s first double-vinyl LP release (also issued as a single cassette and CD). Parents Just Don’t Understand, the lead-off single, made them MTV household names, and tracks like Brand New Funk was received well by their fans. Rock the House was re-released to gold sales later that year.

Another single, Nightmare on My Street, showcased a fictional confrontation with movie villain Freddy Krueger. Coinciding with the release of the fourth Nightmare on Elm Street film (1988’s "The Dream Master"), New Line Cinema was not pleased. A video allegedly shot for the single was buried, and a disclaimer was hastily included on pressings of the album indicating that the record was not officially affiliated with any of the "Nightmare" films (ironically, Jive Records ended up releasing the soundtrack to the next film in the series, "The Dream Child").

1989 saw the release of And in this Corner..., which sold gold, but saw the duo slip in popularity. The crossover curse of various rap acts had come to pass, as their initial audience felt they had become too accessible; non-crossover rap acts like Big Daddy Kane and Boogie Down Productions had bigger street followings; meanwhile, pop radio had latched on to new faces like Tone Loc and Young MC, while non-radio followers became more enamored with hardcore acts like Ice-T and 2 Live Crew. In a bit of mild irony, the lead single, I Think I Can Beat Mike Tyson, featured the brawler in its video, but shortly after the band’s Grammy performance in 1990, Tyson lost his first fight with Buster Douglas.

Smith would later admit to a spendthrift attitude during this time, becoming near-broke, which led him to feel he had nothing to lose when a TV producer approached him to do a show on NBC. The Fresh Prince of Bel-Air boosted his profile, and pocketbook, giving him the leverage to stage a comeback album, Homebase, in 1991. The platinum album featured the lead-off single Summertime, which has become one of their most enduring hits. Code Red, their last studio LP as a duo, released in 1993 to gold sales. The duo made it to the very top of the Singles charts in 1993 with the single Boom! Shake the Room.

Shortly afterward, Smith began to look at acting full-time; his movie roles increased, finally getting his first lead role in 1995’s Bad Boys. 1996’s Independence Day cemented him as a major draw, and he left the Fresh Prince that same year. Strangely, he and Townes ended up being sued by Jive, who alleged that the duo still owed them albums. In an intervew, Smith has stated that while shooting the Men in Black movie, Smith approached Jive with the "Men in Black" single; they turned him down, saying that it couldn’t be a hit. In the aftermath of the movie and soundtrack’s success, the duo settled the lawsuit out of court. Hence, their Greatest Hits compilation includes two cuts from the M.I.B. soundtrack.

Since then, of course, Smith has released three Columbia/Sony albums under his own name; a separate "solo" hits cd was released in 2003. Jazzy Jeff, meanwhile, recorded an aborted album for Columbia in 1999 (including a song with Eminem), and then independently released The Magnificent in 2002. He has also become an R&B producer of note, overseeing releases by Jill Scott and others.