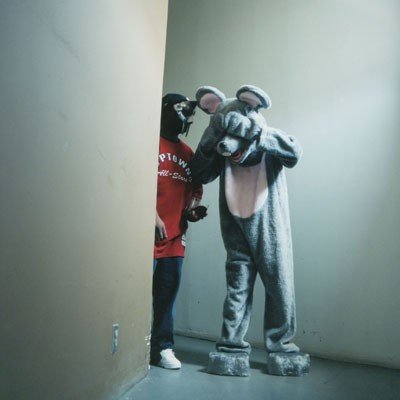 DANGERDOOM was a musical collaboration between producer DJ Danger Mouse and rapper MF DOOM. Their first album, The Mouse and the Mask, was released in 2005, and followed by the Occult Hymn EP, available for free download from the Adult Swim website.

It was inspired by Cartoon Network's Adult Swim programming (where it also received considerable advertising) and features guest performances by Ghostface Killah, Cee-Lo and Talib Kweli as well as character voices and clips from many Adult Swim shows.

DANGERDOOM have also recently released the "Occult Hymn" EP. It features two skits, reworkings of several tracks from "The Mouse and the Mask", and is available for free download from http://www.adultswim.com/promos/dangerdoom/occulthymn/index.html.

A Single for Sofa King has been released as well as a video for "Aqua Teen Hunger Force".

MF DOOM had previously collaborated with DJ Danger Mouse on his remix of Zero 7's Somersault.