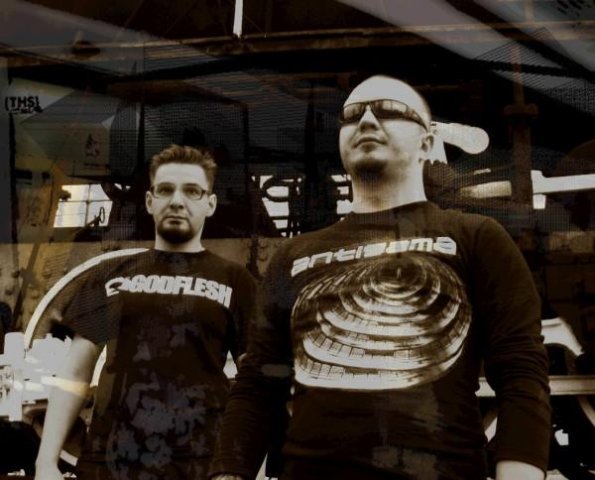 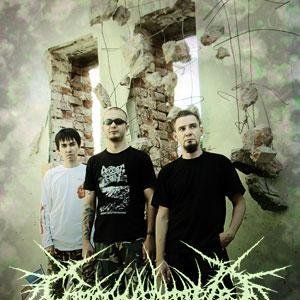 In 2007 Dmitry Kalashnikov (Drums) and Grigory 'Dead Fish' Iltchenko (bass) are stopped playing the fool with their lives and create a music oriented cell. And of course lately the band was amplified by an ultrapositivist and pluralistically Maxim Babkin (guitars). Gena “Coffineater” Pererva becomes the finishing point for that moment – he began to sing the songs.
After communicate with each other for some time they’ve even visit a few cities chasing one goal – to share the joy of creation with other worthy people. Moscow, Donetsk, Kharkov… And of course Kursk, which almost becomes the second home these days. And it is impossible not to mention two remarkable high spots of their Kursk stops – Anton Latyshev and Anton Eremin, not only the good musicians of the legendary-intelligent band VX, but just a plesant people. By the way the last-named is taking a part in full-throttle project SICKCUNT , were as well Dmitrty Kalashnikov (C.C. drums) is demonstrating the wonders of the science….
But let us get back to C.C. As a result of cooperative exaltation they’ve recorded their material on CuntBrother Studio in August 2007. The part of these recordings were put in a split-record with gas-o-tearists VX and ONEROID BLOOD PREASSURE , which were released on Imbecil Entertainment in 2008.
Soon Dead Fish has left the band by some half-strange way. They say, they saw him in Portugal in a company of some ufologists and stuff… But this did not confuse the residuary trinity, they’ve still continue the dialog with the World in their best traditions. In 2008 Maxim was substituted by other guitarist Anton 'Kadabr' Solomatov .
All three were sataniated in a seditious band DEMONSPHERE years ago. They were rehearsing in a torture-basement of the Deaf-house, but this is quite another story. And now the band in its actual formation comes out to a new horizons of perceiving of being.