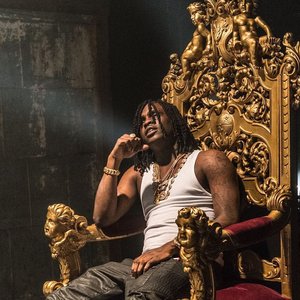 Keith Farrelle Cozart (born August 15, 1995), better known by his stage name Chief Keef, is an American rapper and producer from Chicago, Illinois. Known as one of the central pioneers and propagators of the prominent Chicago drill style, he was 16 upon signing a multi-million dollar record contract with Interscope Records. Keef is also the CEO of his own label imprint Glory Boyz Entertainment, later renamed to Glo Gang. He released his debut mixtape The Glory Road on July 9, 2011 followed by Bang in October that year. Keef's debut album Finally Rich was released in December 2012.

Cozart attended Dulles Elementary School and later Banner High School on Chicago's South Side, which is where he got his career start. In December 2011, he was arrested on a weapons charge (aggravated unlawful use of a weapon) and put under house arrest at his grandmother's home. While under house arrest, Cozart posted several videos to his YouTube account. The attention he received grew in the short time between the release of several mixtapes and several of music videos, including "Bang", "3Hunna" and "I Don't Like". After two locally successful mixtapes, "I Don't Like" became a local hit in Chicago. It also caught fellow Chicago rapper Kanye West's attention, and West organized a remix of the song along with rappers Pusha T, Jadakiss and Big Sean. On July 7, 2012, it was announced that Chief Keef would be performing at the 2012 Lollapalooza music festival.

In the following years, Keef has served up a continuous stream of releases, such as Back From the Dead 2 (2014), Bang 3 (2015), and Thot Breaker (2017). Critics have cited Chief Keef as a major influence on contemporary hip hop through his impact on artists such as Lil Uzi Vert, 21 Savage, and various collaborations.