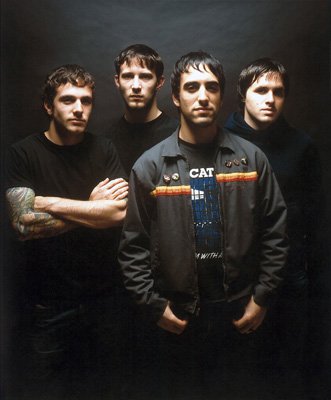 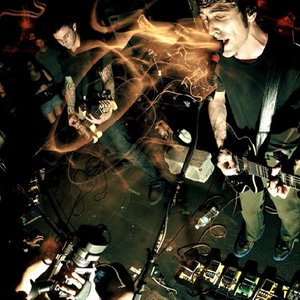 Cave In is an American rock band formed in 1995 in Methuen, Massachusetts. The band was originally formed by vocalist Jay Frechette and vocalist/guitarist Stephen Brodsky. They named themselves Cave In as a reference to the Codeine song Cave-In. The initial lineup also included guitarist Adam McGrath, drummer John-Robert Conners, and bassist Justin Matthes. Their first release was a self-titled 7" on Aaron Turner's Hydra Head Records. Matthes would leave the band in 1997 and his replacement, Andy Kyte, would also leave the following year. Frechette also left the band in 1997 in order to join Ten Yard Fight full time after touring with them for a month. Dave Scrod joined as their new vocalist but left the band in 1998, two weeks before the band was scheduled to begin recording their debut full-length album. Brodsky took on lead vocals and Caleb Scofield joined as their new bassist. Brodsky, McGrath, Conners, and Scofield then became their permanent lineup. Their debut album Until Your Heart Stops was released in 1998 and followed by extensive touring.

Before their next album, Cave In began experimenting with their sound with Creative Eclipses, a five-song EP which indicated a new space rock direction. Their next album was Jupiter, released in 2000. The album received a good deal of press including a feature in Spin Magazine, in which they were described as an "emo-metal Radiohead," which Cave In would reject. The album also caught the attention of major labels who began courting the band after its release. The band released the six-song EP Tides of Tomorrow on Hydra Head Records before accepting a deal from RCA Records.

In 2003, Cave In released their major debut album Antenna. It had more success than their previous albums and earned them a spot on the second stage of 2003's Lollapalooza tour. After Lollapalooza, they toured Europe in support of Foo Fighters and Muse. Shortly after, the band began to revisit their metal roots during concerts, and new heavy material led to a mutual agreement to cut ties with RCA Records. Cave In returned to Hydra Head Records and released Perfect Pitch Black on September 13, 2005.

Following the release of Perfect Pitch Black, Conners departed from the band due to an injury and temporarily relocating to Germany. He was replaced by Converge drummer Ben Koller. In November of 2006, Cave In announced an indefinite hiatus.

In April of 2009, Cave In announced that they had ended their hiatus. With Conners back in the band, they had recorded a four-song EP titled Planets of Old which was initially made available on vinyl at their reunion show on July 19, 2009 at Great Scott in Allston, MA. The EP was released on CD in January 2010 with a bonus DVD of the show. The band released their fifth album White Silence on May 24, 2011.

After tours in support of White Silence, Cave In entered an undeclared semi-hiatus state as all of the band members shifted focus on their other respective side-projects. Brodsky had moved to New York City and formed Mutoid Man with Ben Koller and bassist Nick Cageao, Conners and McGrath had formed Nomad Stones, and Scofield was a member of Old Man Gloom and his own band Zozobra. On December 7, 2014, they performed live for the first time in 3 years, opening for Doomriders' tenth anniversary show. They wouldn't begin formally writing new material until February 2018.

On March 28, 2018, Caleb Scofield was killed in a car accident in Bedford, New Hampshire, on his way home from jamming with Cave In in their Boston rehearsal space. The band then put the new album on hold in favor of touring in honor of him, his wife, and their two children. Major memorial performances included a Boston show with Converge, a Los Angeles show with a one-off reunion of Isis, and an acoustic performance with Brodsky and McGrath at that year's Jacob Bannon-curated Roadburn Festival. This set was recorded and released as Live at Roadburn 2018: Tribute to Caleb Scofield.

On January 2, 2019, Cave In announced plans to release their first studio album in eight years. This album was released as Final Transmission on June 7, 2019 through Hydra Head Records. Mixed by Andrew Schneider, mastered by James Plotkin, and with artwork by Aaron Turner, it consists of practice-space demos featuring Scofield on every song. Hydra Head has been mostly inactive since 2012 but, as the band's main home for the majority of its career, they worked together to release this album. Half of the proceeds will be given to his wife and children.