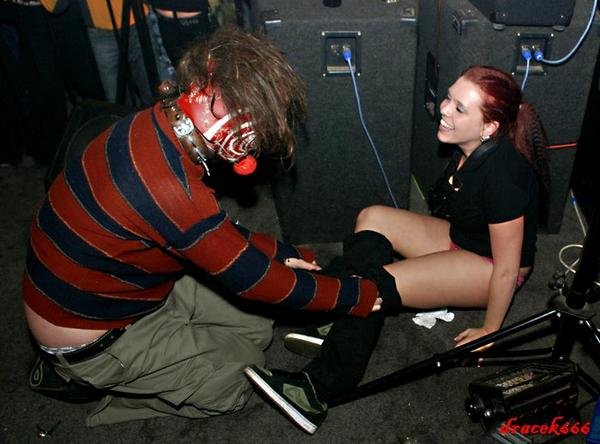 Carnal Diafragma started to compose music in 1997 when three schoolmates Robert and Kamen decided to form a new underground band. Robert was playing the guitar in Ostravian death metal band CADAVEROUS NOISE, Kameň bought drums and a month later Milaňo with his anomalous vocal joined the band. This line-up played until the beginning of 1999 with 3 various bassguitar-players. The band released their first demo tape called "We´ll cut your head off and fucking your neck" at the beginning of 1999, which had been recorded at their practice room without bass. Their "music" could be called gory noise.

In April 99 Stezi joined the band and we released our second demo tape "Live in Havirov", where our music was changing to more serious grindcore. Stezi left the band due to his personal problems at the end of 1999 and David joined the band at the beginning of 2000. About a half year later, Stezi came back and the band started to play with two basses. We played some gigs and we went to Fors studio in order to record our first MCD which was supposed to come out by Khaaranus Prod. However, we were recommended to record some more songs, so in April 2001 we went back to the Fors studio and a couple of months later 1000 copies of "Preparation of the Patients for Examination" CD went out. A few songs from this release appeared on compilations, such as: Tribute to GUT, Tribute to REGURGITATE, Amore Gore Mio and on the split tape with P.I.T. from Slovakia.

In April 2002 we went to Jámy u Žďáru nad Sázavou to record 10 new songs which were used for split MCD with Bizarre Embalming from Czech Republic, 7"EP vinyl with ULCERRHOEA from Germany and split CD-R with PULMONARY FIBROSIS from France. All 10 songs were also released as "Daddy´s Steak" tape with 3 songs from our practice room as a bonus. In summer 2002 we played at Obscene Extreme for the first time and started composing songs for our following CD. In summer 2003 Kameň had a very serious accident and broke his atlas. We could not play for a while but Kamen was a hard guy and recovered very quickly behind his drum set.

In spring 2004 Stezi left the band and joined our friends CEREBRAL TURBULENCY, who were looking for a bass player at that time. We started to play just with one bass. Later on, we recorded all new songs in Šopa studio which were released as our second full CD called "Space Symphony Around Us" by Lecter Music Agency in March 2006.

In May 2006 Kameň was sacked from the band and soon we found Pode, a young enthusiastic drummer from Ostrava, who joined the band and helped us overcome an existential crisis.

There were a lot of changes in 2009. The bassman David left for Mexico for 6 months and his brother Martin replaced him. The drummer Pode joined DEAF99 and was replaced by Martin´s mate Porky. The band with the new line-up recorded their new album called The Planet of Children´s Heads in 2011 which was released by Lecter Music Agency again. In 2012 Martin left the band and his brother David decided to join the band after 2 years again. That year we played at Obscene Extreme Fest for the third time.

In 2015 Milaňo decided to leave the band and Kino (BBYB, ex-CEREBRAL TURBULENCY) replaced him. That year we released the split CD with Mexican band FECALIZER called Human Monsters because on our Facebook profile the most of the fans were from Mexico and this split CD was a tribute to them.

In November 2016 we recorded our 4th album called Grind Restaurant pana Septika. We decided to name all the songs in Czech because Kino had a lot of good ideas and the names of the songs were impossible to translate into English. They represent a disgusting menu with crazy names of dishes which are tongue twisters as well. 500 copies of this album were released by traditional Czech label Bizarre Leprous Production in February 2017.

In June 2017 Porky got bored and left the band. Lukáš (ex-SPASM) joined the band and became a new impulse for our band.