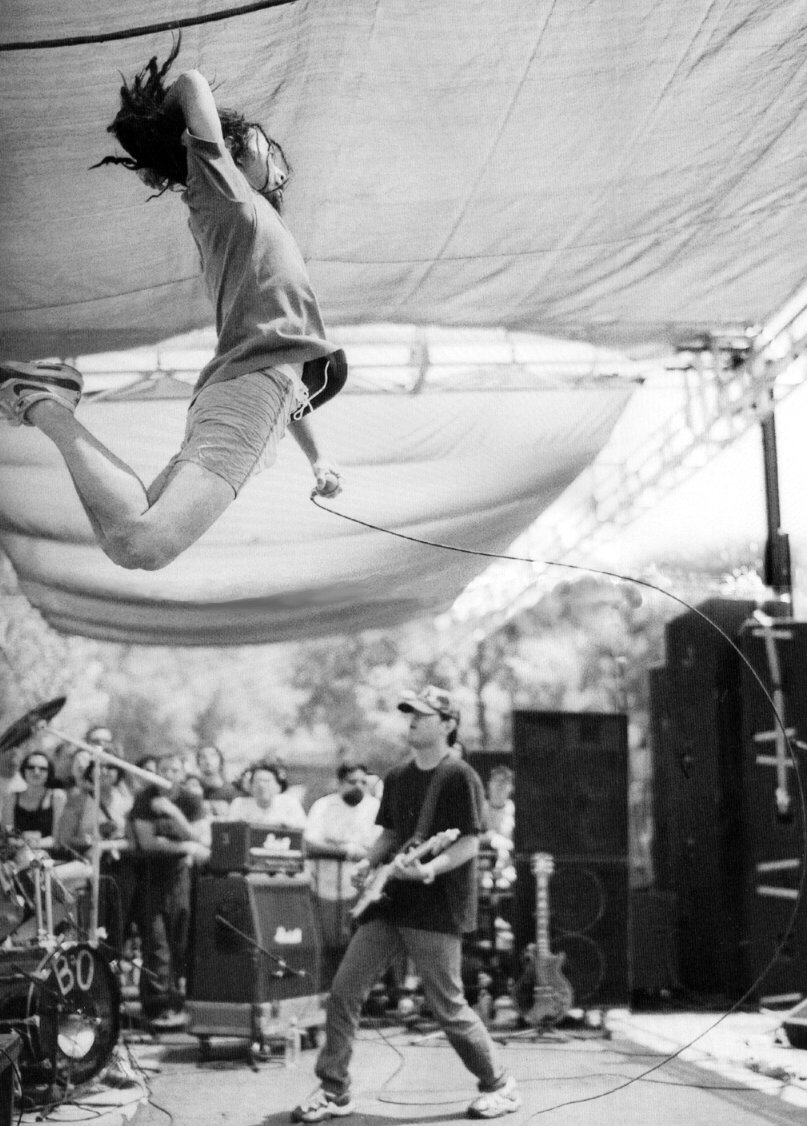 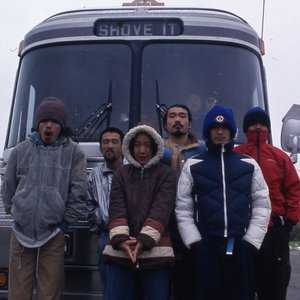 Boredoms (sometimes known as V∞redoms) are a psychedelic/ noise rock group from Osaka, Japan. The band was officially formed in 1986, although some date the band to bedroom tape experiments from 1982.
In a career spanning around 30 years the group has undergone multiple changes in line-up, sound and philosophy. Beginning as a dada ‘no-core’ noise-punk outfit, transmuting into psychedelic krautrockers, their more recent records have been largely based around repetitive minimalism, ambient music, and tribal drumming, most recently appearing in a radically stripped down set-up featuring three drummers with singer Eye making interesting noises over the top.

The band has a vast and sometimes confusing discography. Many band members have rotated through the group over the years, often using a number of various stage names. Singer Yamantaka Eye is the closest the band has to a frontman; his style includes a range of baffling screams, babbling, electronic effects, and very heavy post-production. Drummer/singer/trumpeter Yoshimi P-We has also featured on most Boredoms recordings.

The group’s members have all taken part in myriad side-projects (Seiichi Yamamoto’s Rovo, Eye’s work with John Zorn and Yoshimi P-We’s OOIOO being the most notable) and the group itself divides it’s releases between ‘official’ Boredoms records and an experimental ‘Super Roots’ Series. Group members also soundtracked the notorious Miike film, "Ichi the Killer", using the name "Karera Musication". All of this makes a complete Boredoms discography nigh-on impossible. The one constant throughout is their virtually unclassifiable music and infectious sense of joy.

Boredoms were formed in early 1986 by Yamantaka Eye, who at the time acted as front man for the infamous and highly controversial dada-influenced noise/performance art act Hanatarash, locally notorious for its extremely dangerous live shows consisting entirely of on-stage destruction and complete disregard for the audience's safety (Live shows featured power-tools, industrial diggers, no-holds barred gymnastics and much yelping and screaming). The insane antics of Hanatarash would later be highly influential on the earliest incarnation of Boredoms, which was formed by the remaining members of a band Eye started with Hanatarash drummer Ikuo Taketani, as well as guitarist Tabata Mitsuru (known as Tabata Mara), bassist Hosoi Hisato, and vocalist Makki Sasarato, called Acid Makki & Combi and Zombie. The band's sound was characterized by violent, noisy punk rock/No Wave thrashings. They recorded a single track, "U.S.A.", for a compilation tape. Shortly after the release of their first song, Taketani was replaced on drums by Yoshikawa Toyohito, a friend of Eye's. The band officially changed their name to Boredoms after Hira replaced Hosoi on bass, and Sasarato left the band due to creative differences. The band's name comes from the Buzzcocks song "Boredom".

Their absurdist, scatalogical obsessions got them lumped together US bands such as The Butthole Surfers (the Surfers’ Mark Kramer released the almighty ‘Soul Discharge’ on his Shimmy Disc Label) but in truth, Boredoms’ sound had as much in common at this stage with free jazz and improvisation as anything coming from the American alternative rock scene. They were aggressive, lo-fi and utterly spontaneous - the group changing pitch, volume, and tempo several times in the space of a minute while Eye burbled like a Tasmanian Devil on diet pills. Live shows were marked by an even freer approach, bizarre costumes and much hurtling about the stage.

With the endorsement of the noise-rock aristocracy (Sonic Youth), Boredoms inexplicably found themselves signed to Warner Bros - releasing two of the most uncompromising (and best!) cds ever put out by a major label. “Chocolate Synthesizer” and “Pop Tatari” blend hip-hop, noise, free jazz, speed-punk, funk, reggae and gagaku into a mind-boggling storm of extreme silliness. We shall never see their like again…….

"Super Roots 5" (1995) is seen by some as the pivotal "new" Boredoms sound cd. On paper, the prospect of an hour-long blast of white noise seems very much in keeping with their roots - but in practice Super Roots 5 is much warmer - a sort of psychedelic womb of sound, throbbing and expanding exponentially. It's still a raw and confrontational record, but it hints at a new space-rock direction.

Their subsequent releases - “Super æ" and “Vision Creation Newsun”, are slightly more approachable - if arguably, a little less inventive. By the time of the release of “Vision”, the group’s dissonant side has almost completely been expunged in favour of a a trance-rock sound that is obviously heavily influenced by 70’s German groups such as Can and Neu!.

Both albums also see the emergence of a new spiritual obsessions - particularly with the Sun and water. These obsessions possibly have their roots in Eye's family's religious affiliation with the Oomoto Shinto sect. Around this time the number '7' crops up again and again, both in song titles and in the music itself - again this can be linked to Eye's own private mythology, something he's described as "DNA".

In recent years their releases have been sporadic, though the group has toured extensively in their ‘V∞redoms’ incarnation. Eye suggests that the V∞redoms concept derives from his DJing experience, the “V” representing a needle dropping into an infinite (“∞”) groove.

The emphasis on rhythm is retained from their late-nineties albums, but the krautrock, motorik pulse has been replaced with an orchestrated, ritualistic, tribal three-way dialogue between drummers. t Super Roots 9 ('Livewe!') features a Christmas concert in which the group was augmented by a choir, chanting fragments from work by minimalist composers, Rhys Chatham and Jon Gibson, over a typical V∞redoms drum riot.

Even though some fans feel the group lost an essential element with the departure of guitarist, Seiichi Yamamoto, they show no signs of abandoning their relentlessly experimental journey. The V∞redoms drum rocket found it’s apogee in a New York live performance in which 77 drummers joined Eye to create “Boadrum 77”.
Eye has also started to perform with a Seven-necked guitar.