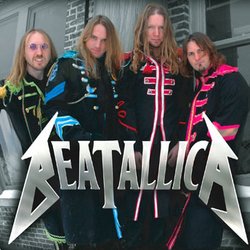 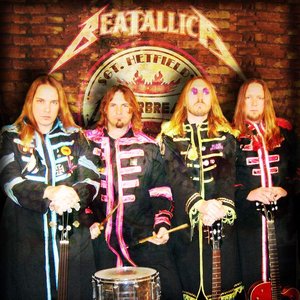 Beatallica The project was founded in 2001 by original guitarist "Krk Hammetson" and singer "Jaymz Lennfield". The EP A Garage Dayz Nite was recorded for the annual Spoof Fest concert held in Milwaukee, as a memento of that year's concert. A few dozen copies of the EP were handed out to friends. Later that year, one of those CDs made its way to Milwaukee resident David Dixon, who created a web page that included mp3s of the songs and named the band "Beatallica". The band was unaware of the webpage until Dixon finally met them in the summer of 2002, carrying a stack of fan emails from all around the world. Beatallica gave the webpage its blessings, and after further urgings from its internet fanbase, recorded the EP Beatallica, also known as The Grey Album, releasing it online on April 1, 2004.

Later in 2004, the band (including bassist "Kliff McBurtney" and drummer "Ringo Larz") started to perform at live venues nationally and internationally, with a stage show incorporating elements from both Beatles and Metallica performances. They also played as an opening act for Dream Theater; Mike Portnoy even joined the band on stage for drums on one occasion. During 2005 and 2006 the band toured around the world, playing over 60 shows, including their first London, UK show on April 26th, 2006. Beatallica would go on to perform with likes of Motorhead, Testament, Kreator, Sepultura, LA Guns and play huge summer festivals worldwide, including Milwaukee's Summerfest, Germany's Earthshaker Festival, The Netherlands' Kings of Metal festival, and Korea's Busan International Rock Festival.

May 2008, marked the release of Beatallica's single; All You Need Is Blood recorded in 13 languages as a worldwide thank-you to the network of Beatallica fans known as Beatallibangers. The band added Belgium, Czech Republic, and Poland to the list of places they have toured.

September & October 2008, saw the release of both Sgt. Hetfield's Motorbreath Pub Band and All You Need Is Blood by Sony-ATV in Japan. Both Japanese CD versions contain bonus tracks.

On April 1st, 2009 (Beatallica's birthday) Beatallica met Metallica backstage after Metallica's show in Paris, France. This was the first time that both bands had actually met each other in person. Both bands have communicated with each other over the years, as they continue to do so, but this was the first time in the flesh that they had a chance to hang out together.

September 11, 2009 Masterful Mystery Tour was released by the German label Megapress. The CD contains a bonus track, Beatallica's cover of the J.B.O. song Eine Guten Tag Zum Sterben (English translation: A Good Day For Dying). Also of note is fact that Beatallica recorded this cover song singing the German lyrics, making this the second song they have released singing in German. Beatallica's cover version of the song was also included on the J.B.O. 2009 album I Don't Like Metal - I Love It (Limited Edition version that includes a bonus CD).

Winter Plunderband was released on November 17th, 2009. It is Beatallica's first ever Holiday Season release. The (EP) album is only available as a CD at Beatallica live shows (very limited pressing) and can also be purchased as a Digital Download which includes Digital Booklet with artwork, lyrics and photos (including Beatallica and Metallica together). The songs included are covers of Paul McCartney’s Wonderful Christmastime and John Lennon and Yoko Ono’s Happy Christmas (War Is Over) and also the very first two Beatallica original songs Hella Day For Holiday and Heretic.