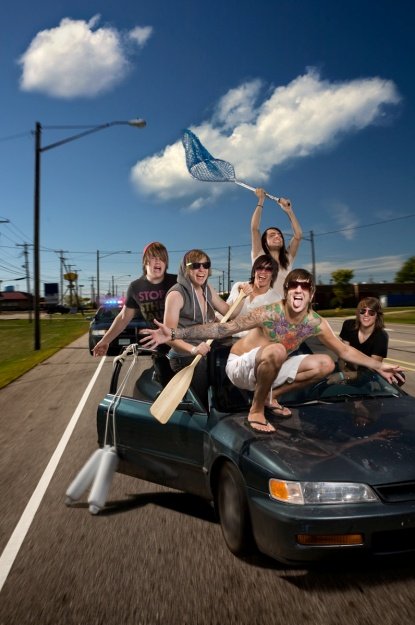 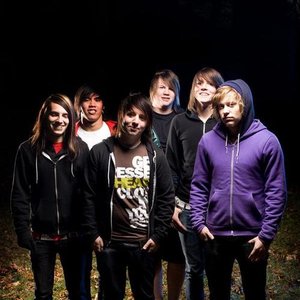 Attack Attack! are an American electronicore band from Westerville, Ohio, formed in 2005. Attack Attack!'s first release, an independent EP titled If Guns Are Outlawed, Can We Use Swords?, was released in 2008, which led to the signing of the band to Rise Records the same year. They then released their two full-length albums, Someday Came Suddenly and a self-titled album (Attack Attack!) both through Rise. A third album entitled This Means War was released on January 17, 2012, also through Rise. The band is currently unsigned.

Attack Attack! was founded during 2005 by members Austin Carlile, Ricky Lortz, Andrew Whiting, Nick White, and Andrew Wetzel. Several months later, Ricky Lortz announced his departure and was soon replaced by Johnny Franck as the new vocalist/rhythm guitarist at the time. Later, Nick White also announced his departure from the group and John Holgado was added on bass and in 2008, Caleb Shomo joined the band on keyboard. In early 2008, they self-released their debut EP titled If Guns Are Outlawed, Can We Use Swords?. Later they signed to Rise Records in June 2008 and released their debut album, Someday Came Suddenly, on the label late that year. Upon the release of Someday Came Suddenly, it peaked at number 25 on the Billboard Independent Albums chart and number 193 on the Billboard 200, with sales of more than 3,600 in its first week despite its mediocre to overwhelmingly negative reviews.

Later, halfway through a tour supporting Maylene and the Sons of Disaster, vocalist Austin Carlile was fired by the group due to personal differences and health issues. Carlile was replaced by Nick Barham, former vocalist of For All We Know. In 2009 for Fearless Records eighth Punk Goes… album, Punk Goes Pop 2, Attack Attack! covered Katy Perry’s “I Kissed a Girl” with Austin Carlile performing the lead vocals, before his departure from the band. Attack Attack! then toured with Escape the Fate, William Control, Black Tide and Burn Halo early in 2009. Attack Attack! was included on Warped Tour 2009 and did signings for the non-profit organization Music Saves Lives where they met with fans who gained special access to the band by donating blood.

On October 19, 2009, lead vocalist Nick Barham announced his departure from Attack Attack! just two days short of their headliner tour. He stated in his blog on MySpace that "It was just time for change," and that there was no conflict between him and the other band members. The band then made the decision of Caleb Shomo to be moved as the band's primary vocalist but still remaining at his place as the keyboardist as well.

On November 10, 2010 Johnny Franck announced he had departed from the band to focus on his relationship with God. He has started a new project called The March Ahead. With this news also came a clip of a new song featuring Caleb Shomo doing both clean, and unclean vocals. Sean Mackowski of My Ticket Home was a touring member of the band, singing the clean parts of songs from the first two albums and playing guitar. The music video for “Smokahontas” was released on January 21, 2011 and was directed by Thunder Down Country films. The music video featured Sean Mackowski of My Ticket Home and Cody Anderson, the former unclean vocalist of In Fear and Faith. Attack Attack! performed on the main stage at the 2011 Vans Warped Tour.
The band re-issued their self-titled album on July 19, 2011 with four new songs, two acoustic songs, and two remixes. A new track entitled “Last Breath” was released on June 7, 2011, to promote the album's re-issue. It is the first song by the band to feature Caleb Shomo on both clean and screamed vocals, and was produced by John Feldmann.
On November 14, 2011 it was announced that the band's third full-length, This Means War would be released on January 17, 2012. The entire album was produced by Caleb Shomo at his home studio. Along with this news, they also posted dates for the "This Means War Tour" with supporting acts from The Ghost Inside, Sleeping with Sirens, Chunk! No Captain Chunk, and Dream On, Dreamer. More news and the album artwork was released in the Hot Topic website "News." On December 13, 2011, they premiered a song from the album entitled “The Motivation”. 30 seconds of the whole track list were released on Amazon.com and pre-orders were also opened in many stores. On January 12, 2012, the band debuted the music video for the first single off the album, “The Wretched”.
The band recently announced their departure from Rise Records, simultaneous with an announcement that they have completed ten songs, produced by John Feldmann, for another album. The band stated that they "don’t have another record label or anything lined up and probably not planning on going to another one." The band went on the This World Is Ours Tour with Escape The Fate and The Word Alive, but had to reschedule the South American This World Is Ours Tour as their drummer Andrew Wetzel was suffering from pneumonia. By the end of 2012 Attack Attack! released a DVD where they talk about Warped Tour and the real reason why Austin left the band in 2008.

The band split in 2013 and several members are now in the group Nativ. Caleb is now the lead singer in the group Beartooth

In 2021 Attack Attack! got back together and dropped Kawaii Cowboys.