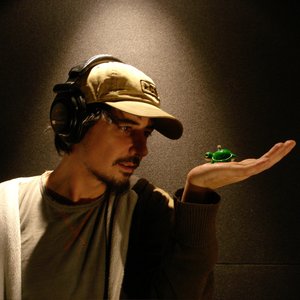 Amon Tobin (born Amon Adonai Santos de Araújo Tobin on February 7, 1972) is a Brazilian musician, composer and producer of electronic music. He is described as a virtuoso sound designer and is considered to be one of the most influential electronic music artists in the world. He is noted for his unusual methodology in sound design and music production. He has released seven major studio albums under the London-based Ninja Tune record label.

It began for him sometime in the mid-90s when, as a fresh-faced Brazilian ex-pat living in the UK, he decided he was going to put down his harmonica, pick up a sampler, and name himself after a Stephen King novel. The resulting album, Cujo's Adventures In Foam (released on Ninebar records, later reissued on Ninja Tune) signalled Amon Tobin's entry into the world of music.

Immediately upon hearing this record, the powers that be at Ninja Tune signed him up to record as Amon Tobin, and he quickly went to work on his debut Bricolage. If you'll recall, these were the trip-hop years for electronic music, where any clown with a sampler and a collection of Blue Note records could knock off some half-baked boutique hotel background music. But Bricolage shone above all that. Although employing a marriage of jazz and beats, it stretched it further by bringing in elements of bossa-nova, batucada, and jungle, and combining it with a sense of song-writing that elevated it above the standards of that aforementioned scene. There is a song on it which was inspired by Amon urinating on his neighbor's bike after a domestic living dispute (One Day In My Garden)… this was clearly the no-good vibes-jazzy-beats guy Ninja had signed.

Next up came Permutation. Although stylistically a logical follow up to Bricolage, it was also on this album where things starting taking a noticeable turn to a much darker output. In fact you can actually trace Amon's career based on coffee shop & dinner party accessibility… and let's just say that this record signalled the end of anyone being able to use Amon records as background music. This one cut a wide path; from the film tributes of Like Regular Chickens & People Like Frank, to the monster breaks on Sordid (easily his biggest 'hit' in the catalog), to the caravan-esque shuffle of "Nightlife," and ending with the ultra-lush Nova (which later was used for Bebel Gilberto's Samba Da Bencao on her debut album).

Call it end of millennium tension, but while the rest of us were out stockpiling food for the apocalypse, Amon was channelling all that into his next release Supermodified. Treating it like if this was the end of the human race as we knew it and computers would never work again (or god forbid, if we were to be ruled by apes), then damn if he wasn't going make this banger before the lights went out. If Amon's career is a 4LP set, then this 3rd instalment appropriately comes off like the 3rd side of any 4LP 70s rock opus… a time to push some boundaries, challenge the fans a bit, and set the stage for what's to come later. The record was an experiment in sound. Marking the point where Amon became more and more obsessed with unheard but felt bass frequencies, and where he allowed a few collaborators into the mix (mainly Chris Morris of Brass Eye & Blue Jam fame, and Montreal beatboxer Quadraceptor). The record where the Bossa-nova/jazz Amon Tobin was for the most part laid to rest and the dark/electronic/soundtrack Amon Tobin came into form. Four Ton Mantis is a classic, Deo would have done Sergio Leone proud, and Get Your Snack On paid tribute to one of the Internet's finest fake commercials. In 2002, Amon decided to relocate to Montreal. As Ninja Tune's North American headquarters is based there he'd spent a lot of time soaking in the culture and summer sunshine of the city, never once thinking that he'd never actually visited during the winter…

Somewhere around the time he felt the sensation of his nose hairs freezing for the first time, so settled into his new studio armed with a fresh set-up and an A La Carte Express menu by his side (Montreal's bible of food for shut-ins) to put the finishing touches on Out From Out Where. When Sun Ra penned the song Out From Out There, 'there' clearly meant outer space. When Amon decided to call his record Out From Out Where, the 'where' meant just that… a record that came from somewhere nobody could quite pinpoint. This was the logical conclusion of what the previous records had hinted at. It was a cohesive and banging record, but one with no obvious reference points. It just sounded like Amon Tobin, and Amon (more so than a lot of artists) can actually say his sound is very much recognizable as his own. This was wide screen Amon, dropping the cut-up hip-hop of verbal, the Eli Wallach inspired Hey Blondie, the future electro-disco of Cosmo Retro Intro Outro, and the terrifying death march of Proper Hoodidge. The tour for this album also resulted in Amon's entry into the Solid Steel mix series, with a tough ass Final Scratch DJ set captured in Australia released in June 2004.

In early 2004 video game developers Ubisoft approached Amon and asked him to compose all of the music for the 3rd installment of their enormously popular Splinter Cell series. Seeing as he wasn't able to get past the second mission of the first Splinter Cell, he thought that making the soundtrack would clearly be an easier way to interact with the game. This was a chance for Amon to experiment with different ways of composing and to finally realize a teenage ambition (although this soundtrack in no way reflects his love for Galaga - even though that was a hot game). Composing a proper soundtrack also allowed him to be a little more progressively excessive, with the inclusion of extended string arrangements and over the top Hammond organ solos woven into his sounds. Italian prog sensation Goblin composing for a Bond film would be an apt comparison for this work. A love of soundtracks has always been a key influence in his work, and it clearly shows here. The game was released in 2005. An accompanying soundtrack on Ninja Tune was released in Jan 05. A 5.1 DVD-Audio version was released simultaneously with the game, putting Amon at the forefront, as always, of pushing sounds forward.

Foley Room was released in 2007 and used the eponymous Foley Rooms at Ubisoft. Sound effects were recorded to create original sounds for the album rather than exclusively beat-sampling. The original concept was derived from an ambition to create an album based on "sound". High-resolution bit samples, gated and distorted to produce similar wave patterns as purely synth-based music. Tracks further into the album include melodic instrument samples, notably The Kronos Quartet provide samples.

On September 8 2010, Esther's Video - directed by Charles De Meyer (aka Chuck Eklectric) was debuted on amontobin.com along with limited edition Monthly Joints Picture Disc vinyl as well as a package of Designer Sounds with Ableton files.

On June 14, 2010 Amon Tobin released a free download of a 4 Deck Set recorded in Seattle in 2009. It is available on his website http://amontobin.com as a free download.