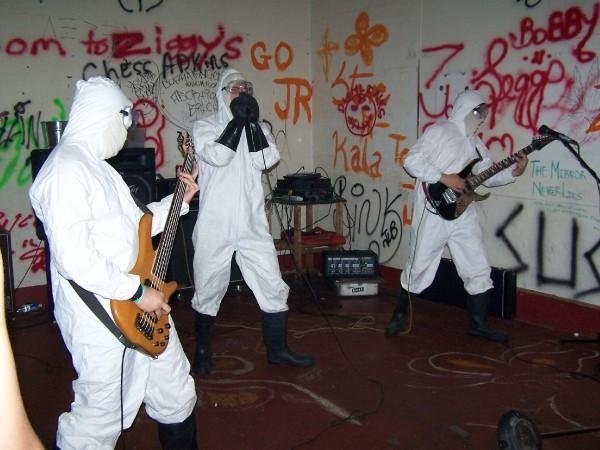 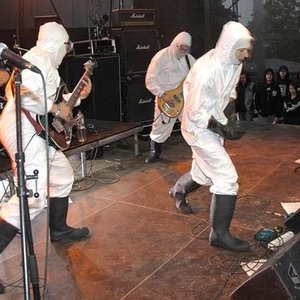 Before Amoebic Dysentery got involved in community service, they were enrolled in a junior school for specials from where they had released their genre-coining album Mongoloid Metal. It was an excursion into the mind of the retarded, playing 38 stunted yet blistering tracks of grind interspersed with refreshing juvenile samples which made one stand up and clap excitedly like a keyed up toy holding a pair of cymbals. Having imperceptibly matured, they have taken measures to prevent you from repeating that annoying act by actually providing a huge colouring book to keep your hands busy with your pencil, the colouring one you used before you reached puberty.

Hospice Orgy sounds like a cross between Decomposing Serenity and Sewage Sammich, and in comparison with their previous full length output, the sound of their drum machine is distinctly thinner and their goofiness a bit restrained, as though they have been asked to carry on with their usual antics in a controlled environment under the observation of teachers or something. Thankfully, Amoebic Dysentery are too full of their puerile selves and therefore do not disappoint. You still have their scampering sharp little riffs that will slash you in places you won't even know until it begins to bleed. These tiny, irritating yet adorable riffs, ride like a superstar surfer on a soundboard that is propelled by the mechanized blur-speed blasting of their drum machine. On top of that, like a dude monkey sitting on its shoulders, you have the snarling sounds and phlegm-ridden noises and shrill screeches. Needless to say, it makes for a breathtaking spectacle, one that you are tempted to acknowledge by applauding vigorously, but then your eyes fall on their colouring book…

Amoebic Dysentery‘s songs, as some of you might already know, are not of the predictable humdrum-machine variety, and regularly feature a deviation from the standard grind riffs by the brazen incorporation of the non-metal ones, more so towards the end of the album. And of course, you have the choicest unconventional intros to their songs. Though not bettering the ones on their debut (maybe because Hospice Orgy doesn't have an Apu intro), they are indeed refreshing and elicit a few sniggers from you, followed up by a vicious bout of coughing, and ultimately bloody vomit. Your guardians will be delighted to know of the presence of educative intros where you learn of new street-smart terms like “toxic vagina” and all the possible different names for penis, something that could prove to be useful when asking your reluctant girlfriend to suck 'it'. Looking at their hilarious song titles you are about to slap your thigh, when you notice their colouring book…