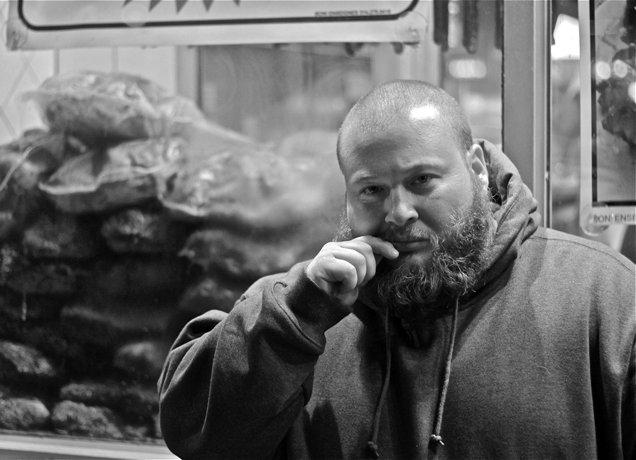 Ariyan Arslani (born December 2, 1983), better known by the stage name Action Bronson, is an American rapper, writer, chef, and television presenter. In August 2012, he signed with Warner Bros. Records, but was later moved to the Atlantic Records-distributed label Vice Records.

Arslani hosts a talk/variety show The Untitled Action Bronson Show, as well as his travel program Fuck, That's Delicious, on Viceland. His frequent collaborators Meyhem Lauren, The Alchemist, and formerly Big Body Bes are regulars on both of his television series. Mario Batali, Andrew Zimmern, Daniel Boulud, Rick Bayless, Grant Achatz, and others have been guests on his television series. In September 2017, Arslani published his first book, based on his travel show, a cookbook, also entitled Fuck, That's Delicious.

Rapping style
Bronson frequently raps about food in his songs. He is also well known for his frequent, and often obscure, allusions to athletes and sports teams. Bronson's lyrics often make reference to sports in New York City but also touch on more obscure subjects such as professional wrestlers, bodybuilders, figure skating and sports betting.

Early in his career, Bronson gained recognition for lyrically and stylistically resembling fellow New York rapper Ghostface Killah of Wu-Tang Clan (with whom he collaborated, along with friend and fellow rapper Termanology, on a song called "Meteor Hammer", from the 2011 compilation album Legendary Weapons). Ghostface Killah himself has admitted to confusing Bronson's rapping for his own. In a 2011 interview with HipHopDX, Bronson was asked about how it was to be compared to the Wu-Tang rapper, and he responded with,

Yeah, I mean at the end of the day, it's all good because Ghostface Killah is one of the best rappers alive, so if I sound similar to the best rapper alive then that is fine. To me there is no comparison; he is a legend and I am a newcomer. If I would try and emulate with anyone it would be Kool G Rap, he is the person I look up to the most. I am not upset but at the end of the day I am my own person and no one can take that away from me.

Personal life
Bronson has two children with a former girlfriend. Bronson's current girlfriend gave birth to a son in November 2019.

During the COVID-19 pandemic in the United States, Bronson documented his weight loss journey using a combination of diet change and high-intensity interval training. To date he has lost 127 pounds (58 kg).