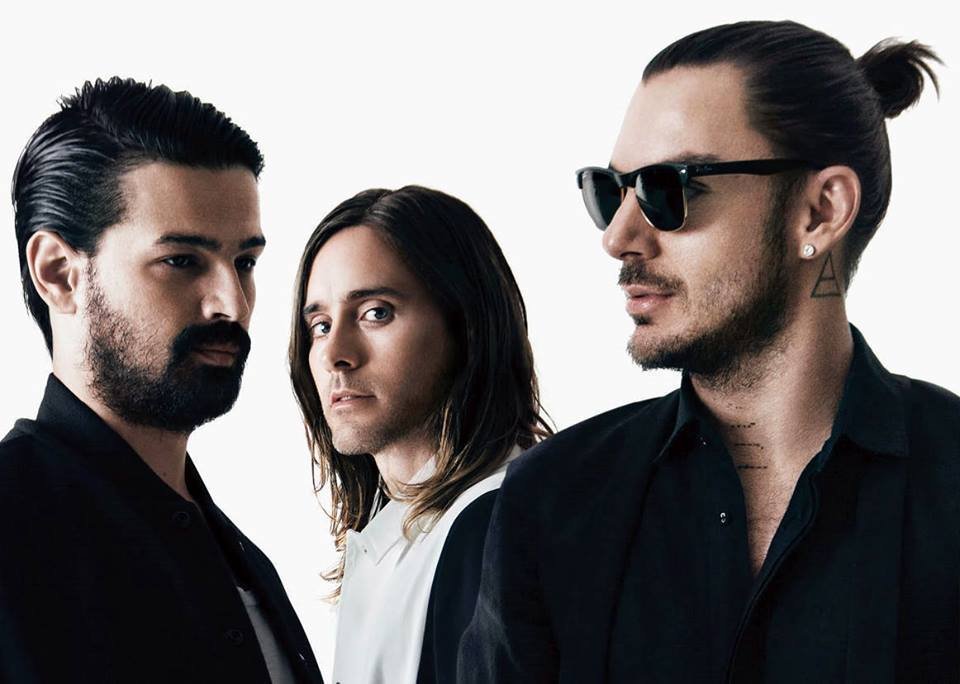 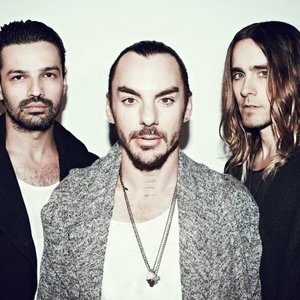 Founded in 1998 in Los Angeles, California, United States by Jared Leto and his brother, Shannon, 30 Seconds to Mars initially began as a small family project. Matt Wachter later joined the band as bassist and keyboard player. After working with a number of guitarists (including Kevin Drake and Solon Bixler), the band auditioned Tomo Miličević to complete the band's official roster. After Wachter's departure from the band in 2006, the Leto brothers and Miličević continue on as a trio with additional touring members, including Tim Kelleher on bass.

Band's Logo
The band's phoenix logo.The band's phoenix logo (which the band named "Mithra") bears the phrase "Provehito in Altum", the band's motto, roughly translated from Latin as "Launch forth into the deep", but a more stylized version would be "Rocket in(to) High(ness)" or "March The Skies". The logo was primarily used for promotion of the band's debut, whereas for A Beautiful Lie, the new Trinity logo was created consisting of three skulls, along with the band's name and motto. For This Is War, the band has adopted the alchemical symbol for air, continuing on the sky/air theme.

The Echelon
The Echelon is a publicity street team for the band 30 Seconds to Mars, which helps in bringing friends to the shows, phoning local radio stations to request the band's songs, putting up posters, posting to band forums or related bulletin boards online, voting for the band in official award nominations and maintaining magazines or websites dedicated to the band. It is also the name of one of their songs in the album 30 Seconds to Mars.

Their debut self-titled album, 30 Seconds to Mars, released on August 27, 2002 in the United States through Immortal and Virgin. Jared Leto described the record as a concept album that focuses on human struggle and self-determination, in which otherworldly elements and conceptual ideas are used to illustrate a truthful personal situation. The album reached #107 on the US Billboard 200 and number one on the US Top Heatseekers, selling 121,000 copies in the United States alone. It was preceded by the single "Capricorn (A Brand New Name)", which peaked at number 31 on the US Mainstream Rock chart and entered the top ten of the UK Rock Chart. Upon its release, 30 Seconds to Mars was met with mostly positive reviews; a critic felt that the band has "managed to carve out a unique niche for themselves in the rock realm." Although the album was a slow-burning success, it eventually sold two million copies worldwide as of March 2011.

A Beautiful Lie - 2005
A Beautiful Lie was released on August 30, 2005 in the United States. Because the album was leaked five months before its release, the band decided to include two bonus tracks: "Battle of One" (an original song that was also set to be the album's title track when it was first announced) and "Hunter" (a cover of the Björk song).

It has since been certified platinum by the Recording Industry Association of America (RIAA), and has reached platinum and gold status in several countries, with a sales total of over four million. It was led by "Attack", which made its radio debut on June 6, 2005 and became the most added track on American modern rock radio during its first week of release.

During 2005, Thirty Seconds to Mars released the album's second single, "The Kill", which set a record for the longest-running hit in the history of the US Modern Rock chart when it remained on the national chart for more than 50 weeks, following its number three peak in 2006. Its music video, directed by Jared Leto under the pseudonym of Bartholomew Cubbins, received a largely positive response and numerous accolades, including an MTV Video Music Award.

Leto described the style as "much more electronic and experimental, with lots of vintage synths." Leto also mentioned that he had written lyrics about some themes he felt were missing from their previous work, such as optimism and sexuality only for the song "Stranger in a Strange Land".

The music video for the song "Hurricane" was banned by MTV and several other TV channels around the world. The video, which runs for 13 minutes and 10 seconds and was directed by Jared Leto under the pseudonym Bartholomew Cubbin, premiered on MTV on November 29, 2010. The video was censored and banned because of its elements of violence, nudity and sex. On November 28, 2010, Jared Leto posted the letter from MTV about the censorship of the video on his blog. The list features the offending scenes, such as a woman running her finger on the anus of another G-string woman, which was classified as "restricted". It was only this shot which had made the video completely restricted.

Love, Lust, Faith and Dreams is a concept album revolving around the themes after which the album is named. The album is divided into four segments, each named Love, Lust, Faith and Dreams, with the beginning of each segment declared by a female voice proclaiming the name of the segment before the beginning of a song or at the end of an interlude which introduces the next segment of the album.

A more specific album concept can be seen inside the CD. It is recognized by four colors, with the color red standing for Love, yellow for Lust, green for Faith, and blue for Dreams. LOVE contains "Birth" and "Conquistador". LUST contains "Up in the Air", "City of Angels", "The Race", "End of All Days" and "Pyres of Varanasi". FAITH contains "Bright Lights", "Do or Die" and "Convergence". DREAMS contains "Northern Lights", and "Depuis Le Début".

"Up in the Air" was released as the lead single from Love, Lust, Faith and Dreams on March 19, 2013. A CD copy of the single was sent to NASA and SpaceX for launch aboard the Dragon spacecraft on SpaceX CRS-2. The mission was launched atop a Falcon 9 rocket on March 1, 2013, sending the first ever commercial copy of music into space. The spacecraft berthed and docked with the International Space Station on March 3, 2013, making the single available to play by the Expedition 35 crew aboard the station. The song made its worldwide debut aboard the station on March 18, 2013 and was released as a Digital download single on iTunes the next day. The music video was released on April 19, 2013 worldwide on Vevo.

"City of Angels" was sent to US Modern rock radio as a promotional single from Love, Lust, Faith and Dreams on July 23, 2013. A music video for "City of Angels", featuring Bartholomew Cubbins as director, was released onto YouTube on October 29, 2013. It was shot over two days on August 18 and 19, 2013, in Los Angeles, California.

"Do or Die" was released as a promotional single from Love, Lust, Faith and Dreams on September 9, 2013 in Europe. During the Summer European Tour, Jared confirmed the band was recording footage for a live video for the song. The music video was released on August 5, 2013 worldwide on Vevo.