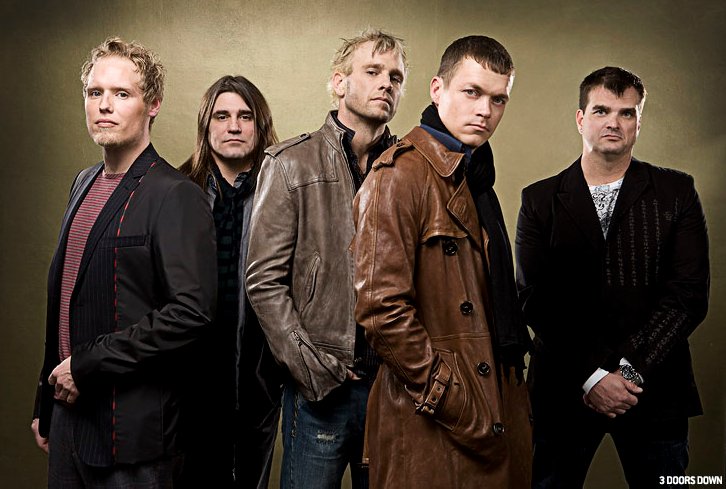 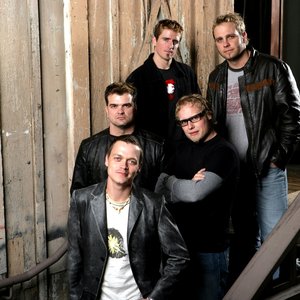 3 Doors Down is a post-Grunge influenced Alternative rock group from Escatawpa, Mississippi, United States that formed in 1996. Consisting of Brad Arnold (vocals), Chet Roberts (guitar, a replacement for Matt Roberts), Todd Harrell (bass), Chris Henderson (guitar), and Greg Upchurch (drums), the band is known for several successful rock singles such as "Here Without You" and "Kryptonite". The group signed to Universal Records in 2000.

Universal then released their first album, 'The Better Life', and they garnered a big fan response. They received international fame with their first single, "Kryptonite", in particular. The album went on to sell over 6 million copies.

In 2002, 'Away From The Sun' was released with the single "When I'm Gone". The ballad "Here Without You" became another multi-format success, doing especially well in the adult contemporary space, while the singles "The Road I'm On" and "Away From The Sun" were minor hits. The album went on to sell over 3 million copies.

3 Doors Down released their third studio album, Seventeen Days, in 2005, and it debuted at #1 on the Billboard Music Chart. The album achieved platinum status in less than a month. Its first single, "Let Me Go", received much airplay, and was followed by a second song called "Behind Those Eyes."

In 2007, they made a music video with the upcoming track "Citizen Soldiers" for the National Guard.

In May of 2008 3 Doors Down released their 4th full length studio album the self titled "3 Doors Down". The first single is It's Not my Time. They also launched a world tour in March in support.

3 Doors Down was formed by drummer vocalist Brad Arnold, guitarist Matt Roberts and bassist Todd Harrell. The three were friends who had grown up together in Escatawpa, and who all shared a common interest in rock music. The band began playing locally around the city, playing a mix of both cover songs and original songs that would eventually be recorded on their first release. Brad Arnold eventually ended up not only drumming, but also acting as the group's singer, mainly because, as he puts it, "nobody else would do it, but I did and enjoyed it." Arnold is also their lyricist, and wrote some of their early hits when he was 15, often working on songs during math class.

The band eventually began to tour outside of their city, and it was during a trip to Foley, Alabama that they came up with their official name. When the three men were walking through the town, they saw a building where some letters had fallen off of its sign, and it read "Doors Down." Since at the time they consisted of three people, they added the "3" to create "3 Doors Down."

A couple years after performing together, Todd Harrell asked guitarist Chris Henderson to join the band in order to make the sound more full. They recorded a demo CD of their original songs at Lincoln Recording Studio in Pascagoula, Mississippi. Radio station 97.9 WCPR started playing the EP version of "Kryptonite", and it became the #1 requested song on the station for over 15 weeks and led to Universal Records signing the band.

3 Doors Down's first album, The Better Life was released on February 2 , 2000, and went on to become the 11th best-selling album of that year, selling over 3 million copies. It has since been certified 6x platinum, thanks in large part to the international hit singles, "Kryptonite", "Loser", and "Duck and Run". A fourth single, "Be Like That", also did well and was actually re-recorded for the 2001 film American Pie 2, with alternate lyrics for the first 3 lines. This version is known as "The American Pie 2 Edit".

For recording the album, Brad Arnold recorded both the vocal and drum parts. However, when touring to support The Better Life, the band hired a drummer so that Arnold could perform at the front of the stage.

Session drummer Josh Freese was hired to record drums for Away from the Sun. Also, Rush guitarist Alex Lifeson produced and performed on three tracks for the record, "Dangerous Game", "Dead Love", and "Wasted Me", but only "Dangerous Game" would appear on the finished product. The band hired Canadian Daniel Adair to play drums for the Away From the Sun tour. He would go on to record the drums for the band's next studio release, and was with the band aboard the U.S.S George Washington (CVN 73) to film the music video "When I'm Gone".

In 2003, 3 Doors Down released a live E.P. entitled Another 700 Miles consisting of recordings from a live performance by the band in Chicago, Illinois. Another 700 Miles has since been certified Gold in the United States. Besides featuring some of 3 Doors Down's hit singles from their previous two albums, the E.P. also contains a version of the popular Lynyrd Skynyrd song "That Smell".

In 2003, the band began hosting the annual "3 Doors Down and Friends" benefit concert, through the band's own charity The Better Life Foundation. In 2006, this event was held at the Mobile Convention Center, with proceeds benefiting Hurricane Katrina survivors. As residents of Escawtawpa, the members of the band saw the effects of Katrina's devastation.

The band's third studio album, 2005's Seventeen Days, has since been certified platinum. "Let Me Go" and "Behind Those Eyes" charted with the most success. "Live for Today", "Landing in London" (on which Bob Seger provided back-up vocals and guitar), and "Here by Me" were also released as singles. During the Seventeen Days tour, the band appeared alongside southern rock band Lynyrd Skynyrd, as well as headlined many shows of their own.

Also in 2005, the band released a live DVD entitled Away from the Sun: Live from Houston, Texas. The DVD was produced and directed by Academy Award nominated Alex Gibney and Doug Biro. It features songs from both The Better Life and Away from the Sun, and even some early sketches of "It's Not Me" and "Father's Son", which were both eventually released on Seventeen Days.

- Greg Upchurch, formerly of Puddle of Mudd, replaced Daniel Adair in 2005, when Adair left to accept the position as drummer and contributing member of Nickelback.
3 Doors Down (2008-present)
Question book-new.svg
This section needs additional citations for verification.
Please help improve this article by adding reliable references. Unsourced material may be challenged and removed. (March 2009)
Ambox content.png
This section may contain original research or unverified claims. Please improve the article by adding references. See the talk page for details. (March 2009)

3 Doors Down released their self-titled fourth album on May 20, 2008. It debuted at #1 on the Billboard 200, selling 154,000 copies in its first week. It is the band's second consecutive #1 album on the chart after Seventeen Days, as well their fourth album to reach the Top Ten. The album contains the hit singles "It's Not My Time", "Train", "Let Me Be Myself" (currently featured in a GEICO commercial) and "Citizen/Soldier", a song written as a tribute to the National Guard. The band has just recently begun writing their next record. It is rumored that they are going back in the studio near the end of the year to record their new album which can be expect to be out by spring/summer 2010.

3 Doors Down started The Better Life Foundation (TBLF) in 2003, with a goal in mind to give as many children as possible a better life. Since its inception TBLF has supported numerous charities nationwide, as well as providing aid and assistance to the Gulf Coast region of Mississippi during Hurricane Katrina.

When the Mississippi town of Waveland took an especially hard hit from Katrina, the charity was able to purchase three police cars and a fire truck to help with rescue efforts. Also, in connection with Wal-Mart, were able to supply the town with three semi-trucks full of rescue supplies. There was also extensive support from TBLF in providing funding for rebuilding efforts in the town

3 Doors Down and The Better Life Foundation host a yearly show in at the Hard Rock Hotel and Casino in Biloxi, MS to raise money for the charity. In addition to a concert from 3 Doors Down and friends, there is also an auction, which includes numerous items from musical friends, sports icons, and other various supporters of the band and the charity. There is an average of sixty items auctioned off yearly, and proceeds are given to TBLF.

This year's show will feature 3 Doors Down, MuzikMafia, and Switchfoot.

Information about the charity can be found at http://www.thebetterlifefoundation.org