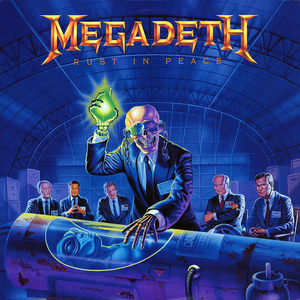 "Hangar 18" is a progressive thrash metal song by heavy metal band Megadeth. It is the second track on their 1990 album Rust in Peace. Mustaine was likely inspired by UFO conspiracy theories or possibly the 1980 movie, 'Hangar 18'. Hangar 18 is located at Wright-Patterson Air Force Base near Dayton, Ohio, and it is speculated that an alien aircraft was brought there from Roswell in 1947. A sequel to this song called "Return to Hangar " was included on Megadeth's ninth album, The World Needs a Hero. Music video: http://www.youtube.com/watch?v=fLqdFnbHAlw A cover of "Hangar 18" is featured in the music video game Guitar Hero II for PlayStation 2 and Xbox 360, where it's considered one of the hardest songs in the game, being placed in the eighth and last setlist tier.