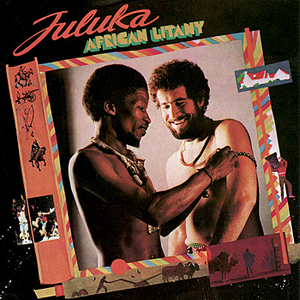 Impi is a song by South African music band Juluka, from their second studio album, African Litany, released in 1981. Impi is a Zulu word for any armed body of men. The song retells the story of the Battle of Isandlwana between the British Empire and the Zulu Kingdom on 22 January 1879. The battle was a decisive victory for the Zulus and the British Army suffered its worst defeat against an indigenous foe with vastly inferior military technology. Impi was banned from the radio in South Africa at the time but gained underground popularity. It remains a cult classic in South Africa and has now become mainstream to the point of often been associated with international sports events, in particular rugby. https://en.wikipedia.org/wiki/African_Litany https://web.archive.org/web/20090412152531/http://www.scatterlingsclub.com/Shop/Catalogues/ViewProduct.asp?Product=36 https://www.johnnyclegg.com/lyrics/afrlit.html#1 https://en.wikipedia.org/wiki/Battle_of_Isandlwana

Jonathan (Johnny) Clegg, born June 7, 1953 in Rochdale (near Manchester), Lancashire, (UK), is a popular musician from South Africa, who has recorded and performed with his bands Juluka and Savuka. Sometimes called "The White Zulu", he is an important figure in South African popular music history, with songs that mix Zulu and English lyrics, and African / European / Celtic music styles. Already in his youth, Johnny Clegg, a white, English-speaking person with what he called a "secular Jewish" upbringing in the UK Show more ...