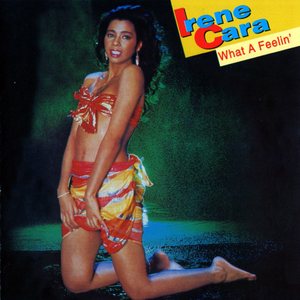 “Flashdance… What a Feeling” is a song from the 1983 film Flashdance, written by Giorgio Moroder, Keith Forsey, and Irene Cara, and performed by Cara. Despite the title, the word “Flashdance” is never used in the lyrics; however, the line “In a flash, take a hold of my heart” refers to the movie’s title. The instrumental backing tracks of the song made extensive use of synthesizers. In addition to topping the Billboard Hot 100, becoming Cara’s only No. 1 hit and earning a platinum record in 1983, “Flashdance… What a Feeling” won the Academy Award for Best Original Song, and the Golden Globe Award for Best Original Song in 1984. Giorgio Moroder originally recorded “Flashdance… What a Feeling” with Joe Esposito; Paramount Pictures asked Moroder to rework the song with a female artist to parallel the gender of the dancer who was the film’s protagonist. The song appears on the original soundtrack album of Flashdance, and Irene Cara’s second solo album, What a Feelin’. Cara won the Grammy Award for Best Pop Vocal Performance, Female, in 1984 for her performance of the song. The song was also nominated for Record of the Year.

Irene Cara (born on March 18, 1962 in New York City, New York) is an American singer, Academy Award-winning songwriter and actress of African, Cuban and Puerto Rican descent. Cara won an Academy Award in 1984 in the category of Best Original Song for co-writing Flashdance...What a Feeling. She is best known for her recordings of the songs Fame and Flashdance... What a Feeling. She also starred in the 1980 film version of Fame. Personal Her father Gaspar (died in 1994) is an Afro-Puerto Rican. Show more ...