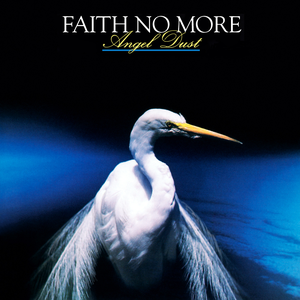 "Midlife Crisis" is a song by the alternative metal band Faith No More, from their fourth studio album Angel Dust. According to singer Mike Patton "The song is based on a lot of observation and a lot of speculation. But in sort of a pointed way its kind of about Madonna... I think it was a particular time where I was being bombarded with her image on TV and in magazines and her whole schtick kind of speaks to me in that way... like she's going through some sort of problem. It seems she's getting a bit desperate." The song also had a working title of 'Madonna'. Patton has also denied that the song is about having a midlife crisis, as he didn't know what one would feel like, but says "it's more about creating false emotion, being emotional, dwelling on your emotions and in a sense inventing them." The song contains a sample from "Cecilia", as performed by Simon and Garfunkel and another from "Car Thief", as performed by The Beastie Boys. "Midlife Crisis" is featured on the soundtrack for the videogames Tony Hawk's Underground 2 and also Grand Theft Auto: San Andreas, on the fictional Alternative station Radio X. This song was covered by the industrial metal band Bile on their 2002 cover album, The Copy Machine. It was also covered by American Rock band Disturbed on their album Indestructible (as a B-side track).

Faith No More is an alternative metal group that formed in San Francisco, California, USA in 1979. Their music combines elements of various different genres, including heavy metal, funk, hardcore punk, progressive, electronica, soul, gospel, film scores, soft rock, R&B, hip hop and jazz, among many others. Faith No More formed in 1979 under the name Sharp Young Men, and later Faith No Man. This early incarnation of the band was fronted Mike "The Man" Morris. Show more ...