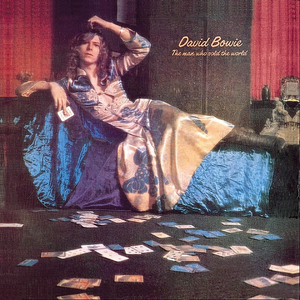 The Man Who Sold the World - David Bowie

The Man Who Sold the World

"The Man Who Sold the World" is a song written and performed by David Bowie. It is the title track of his third album, which was released in the US in November 1970 and in the UK in April 1971. The song has been covered by a number of other artists, notably by Lulu, who had a UK No. 3 hit with her version in 1974, and Nirvana, whose 1993 performance of the song for the television program MTV Unplugged introduced it to a new audience. The song was reworked by Bowie, featuring atmospheric synths, a new bassline, techno-style drums and a notably darker mood, for performances in concerts from 1995 to 1997, including the 1995 MTV Europe Music Awards. Bowie later returned to playing the original version in the 2000s.

David Bowie (b. David Robert Jones on 8th January 1947 in Brixton, London, UK, d. 10th January 2016 in New York, USA) was an English rock singer, songwriter, musician, and actor. Active during six decades of popular music and frequently reinventing his music and image, Bowie is widely regarded as an innovator, particularly for his work in the 1970s. Shortly after releasing his 25th studio album Blackstar, it was announced Bowie died on 10 January 2016, following an eighteen-month battle with cancer. Show more ...

The Man Who Sold the World - David Bowie