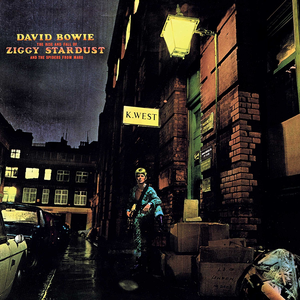 "Moonage Daydream" is a song written by David Bowie in 1971 and first released as a single under the name Arnold Corns. A rerecorded version was released in 1972 on the album The Rise and Fall of Ziggy Stardust and the Spiders from Mars. Song's classic guitar solo, performed by Bowie's guitarist Mick Ronson, was ranked 85. on Guitar World's "100 Greatest Guitar Solos". Story: The alien messiah is revealed/created, and his destiny to save the world from the disaster in "Five Years" is also hinted at, as well his fate as the quintessential "soul lover". In terms of the plot, this is one of the most important songs as it describes the creation of Ziggy from a combination of religion, romance, sexual freedom, rebellion, and passion; he metamorphoses into the archetypal rock star. Moonage Daydream: The Life and Times of Ziggy Stardust is the title of a book written by David Bowie, published in 2002 by Genesis Publications, named after this song. The book documented the years 1972-73 and was fully illustrated with the photography of Mick Rock. David and Mick met in 1972 and formed a working relationship and lasting friendship. Subsequently, Mick Rock was allowed to become the only photographer authorised to record the 2-year career of Ziggy Stardust. The Arnold Corns version of "Moonage Daydream" was released by B&C on single in the UK in April 1971. "Hang on to Yourself" was the B-side. [edit] Production credits * Producer: o David Bowie and Ken Scott * Musicians: o David Bowie: Vocals o Freddi Buretti: Vocals o Mark Carr Pritchard: Guitar o Mick Ronson: Guitar o Trevor Bolder: Bass guitar o Mick "Woody" Woodmansey: Drums The official band line-up, fronted by dress designer Freddi Buretti, was a total fabrication; Buretti was at the session but his contributions were simply lost alongside Bowie's. This version was also released as a bonus track on the Rykodisc rerelease of The Man Who Sold the World album (1990). It also appeared on the Ziggy Stardust - 30th Anniversary Reissue bonus disc in 2002.

David Bowie (b. David Robert Jones on 8th January 1947 in Brixton, London, UK, d. 10th January 2016 in New York, USA) was an English rock singer, songwriter, musician, and actor. Active during six decades of popular music and frequently reinventing his music and image, Bowie is widely regarded as an innovator, particularly for his work in the 1970s. Shortly after releasing his 25th studio album Blackstar, it was announced Bowie died on 10 January 2016, following an eighteen-month battle with cancer. Show more ...