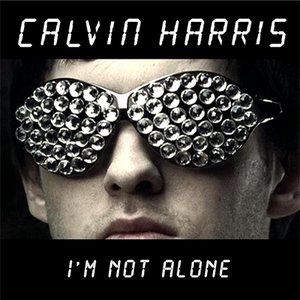 "I'm Not Alone" is the lead single from Scottish DJ and producer Calvin Harris' second album and his first appearance on a single since "Dance Wiv Me" with Dizzee Rascal and Chrome, which peaked at number 1 in the UK singles chart in 2008. "I'm Not Alone" was first-played by Pete Tong on BBC Radio 1 as his "essential new tune" on January 23, 2009 and has been described as a slice of euphoric dance. On April 12, 2009, the song debuted at #1 on the UK Singles Chart, giving Harris his first solo #1 single in the UK and second overall. In the United Kingdom, "I'm Not Alone" debuted at number 1 on the issue dated April 12, 2009, knocking off Lady Gaga's second UK number 1 single, "Poker Face". The following week it remained at #1 for a second week, seeing off competition from La Roux's second single "In for the Kill". The video for "I'm Not Alone" was filmed in Oslo, Norway on February 6, 2009. It was directed by Christian Holm-Glad. The clip begins with a small boy (potentially meant to represent a young Harris) found in thick snow wandering the woods draging a sledge with a toy bear on top. He then sets up camp and lights a fire to keep warm whilst cuddling his toy bear. The bear is then found on the sledge again and is then dropped. The scene closes and cuts to a dungeon styled setting that showcases Harris portayed as a Frankenstein type character who is seen to perform experiments on numerous female captives, combining their essences to reanimate his "lost" teddy bear. Calvin Harris told The Metro newspaper that this song is "about feeling too old to go clubbing – I'm 25 now and it does feel a lot older than when I was having my first hit aged 22." (Source I'm Not Alone Songfacts). Calvin scored his biggest solo UK hit to date in April 2009 with the No.1 single 'I'm Not Alone'. The track has been described as 'a slice of euphoric dance' and is the lead single from Harris' second album, due for release later this year.

Calvin Harris (born Adam Richard Wiles; January 17, 1984 in Dumfries, Scotland), is a Scottish singer, songwriter and record producer. He was born and grew up in Dumfries, Scotland. His interest in electronic music surfaced in his early teenage years, producing his first bedroom demo by the age of 15. His first album I Created Disco was released on 18 June 2007. The album contained up-tempo electroclash songs that were influenced by music from the 1980s. Show more ...