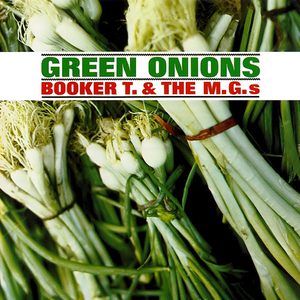 "Green Onions" is a hit soul instrumental recorded in 1962 by Booker T. & the MG's, composed by Steve Cropper, Al Jackson, Jr., Booker T. Jones and Lewis Steinberg. The tune is a twelve bar blues with a rippling Hammond organ line. According to guitarist Steve Cropper its name arose from the band members' efforts to think of a title that was "as funky as possible".[1] "Green Onions" entered the Billboard Hot 100 in September of 1962 where it remained for 16 weeks, peaking at number 3. Originally issued on the Volt subsidiary of Stax Records, it was quickly reissued on Stax proper; it also appeared on the hit album Green Onions. The recording did not chart in the UK until January 1980 after being featured in the 1979 film Quadrophenia. "Green Onions" has been used extensively in radio, television, film and advertising. The tune is also a favorite at baseball parks across the United States. "Green Onions" was ranked #181 on Rolling Stone's list of the 500 greatest songs of all time. In a live cover of this tune from the album Everybody Needs the Blues Brothers, Dan Aykroyd, as his character Elwood Blues of the Blues Brothers comments on the song during a vamp, "I believe that this tune can be equated with the great classical music around the world. Well now you go to Germany, you got your Bach, your Beethoven and your Brahms. Here in America, you got your Fred McDowell, your Irving Berlin, your Glen Miller, and your Booker T. & the MG's!"

Booker T. & the M.G.'s is an instrumental rhythm & blues band that was influential in shaping the sound of Southern soul and Memphis soul. The original members of the group were Booker T. Jones (organ, piano), Steve Cropper (guitar), Lewie Steinberg (bass), and Al Jackson, Jr. (drums). In the 1960s, as members of the house band of Stax Records, they played on hundreds of recordings by artists such as Wilson Pickett, Otis Redding, Bill Withers, Sam & Dave, Carla Thomas, Rufus Thomas, Johnnie Taylor and Albert King. Show more ...